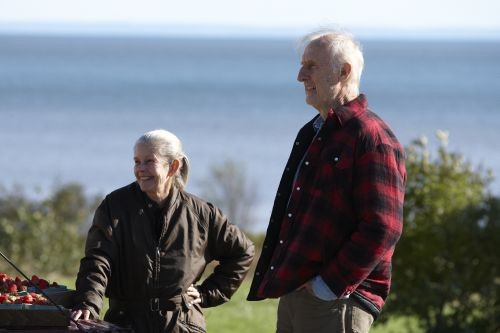 You can’t fight City Hall … or Father Time. Oh, the irony. On the one hand, you have the wonderful character actor James Cromwell enjoying a rare instance of playing the leading man as Craig Morrison, a crusty farmer determined to make his ailing wife’s final years as comfortable as possible. On the other, the proud and loud liberal actor headlines a movie whose plot could have been scripted by the Libertarian Party. The results for this “based on a true story” drama are decidedly mixed, an affecting Hallmark card to the struggles of aging that does double duty as a screed against the evils of bureaucracy while celebrating can-do self-sufficiency.

Watching Cromwell balance Craig’s ornery stoicism with his deepening concern for his wife, Irene (Genevieve Bujold), is a master class in nuance and understatement. Both he and Bujold bring grace and an intimate sense of history to their couple’s 61-year relationship. The debilitating impact of Irene’s Alzheimer’s never becomes an excuse for cheap melodrama but rather a canvas for the actors’ tender attentions and inner strength. Though the script has a tendency to speak in banalities, Cromwell and Bujold fill the spaces between the lines with quiet dignity and resolve, defying moments that might otherwise come off as mawkish.

I wish I could say as much for writer-director Michael McGowan’s narrative instincts. When Craig decides to build a smaller, safer single-level home on his rural property he runs afoul of government bureaucrats who demand such things as — gasp! — blueprints and permits. What’s a folksy, do-it-yourself kind of guy like Craig to do? After all, his family has a long legacy of building their own home their own way, and at 87 he’s as robust as any pair of pasty 50-year-old socialist-minded suburbanites. As Canada’s Kafka-esque zoning czars threaten to bulldoze his homestead of defiance and his lawyer Gary (the affable Campbell Scott) tries run interference, all looks lost, until … well, I won’t give away anything here, but suffice it to say that my comparison to Hallmark TV movies was no accident.

It’s not that there’s anything wrong with McGowan constructing a tale dedicated to rugged individualism and free market ideals, it’s that he’s so nakedly ham-fisted in his approach. Not only are we to believe that Craig is completely ignorant and surprised by basic building regulations, but the bureaucrats who enforce said rules are portrayed as malicious and sadistic villains hell-bent on crushing Craig’s dreams, rather than folks who have a job to do — a job that has well-reasoned arguments for existing. One can disagree with the rationale behind some government regulations but to pretend that they exist merely to thwart the efforts of noble-minded fellas like Craig is to scribble adult issues in kid-sized crayons. Nothing makes that clearer than Craig’s final speech, which compares home-building to baseball while honoring civil disobedience. Lacking even rudimentary logic, the monologue relies heavily on everyman sentiment, something Cromwell’s performance has assiduously avoided.

Unfortunately, McGowan is far bolder in his approach to the traumas of bureaucracy than he is in his depiction of aging. Every time Still Mine starts to seriously confront what it means for the couple to face their last days together, McGowan backs away, falling into the mechanics of his man-versus-red tape plot line. Such a shame, since his actors are more than ready to tackle the emotional terrain that comes with the topic.

While no one will mistake the movie for the unblinking brutality of Amour or the emotional complexities of Away With Her, Cromwell and Bujold bring powerfully poignant moments of connection and insight. Craig and Irene are difficult people by nature but not without their fragilities. His gruff impatience with her failing memory and her well-honed ability to defuse his temper through teasing belie a lifetime of living with one another. A scene where the couple undresses in front of one another is handled with the simple profundity that this husband and wife share so much more than just time together.

When Still Mine’s title reflects the sincerity and adoration we witness between two very private people — rather than a declaration of ownership — McGowan’s movie is worthy of the wonderful cast he’s attracted.

Still Mine opens at the Uptown Birmingham 8on Friday, Aug. 30. It is rated PG-13 and runs 103 minutes. Watch the trailer here.