Film Review: The Face of Love

Annette Bening falls for her dead husband’s ringer in a love story too improbable. 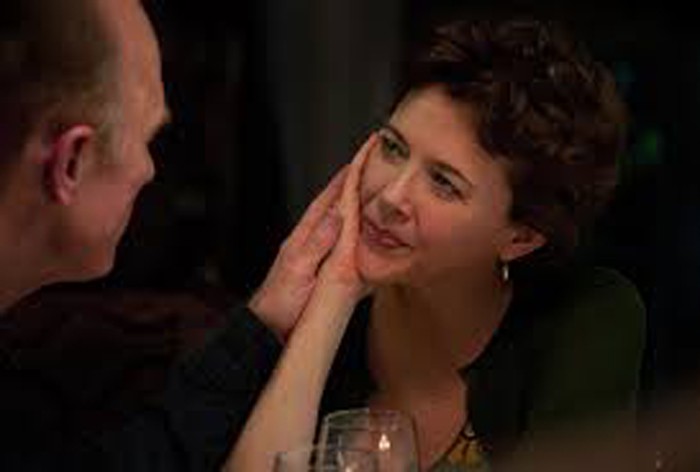 The Face of Love | C

Annette Bening and Ed Harris make a splendid big-screen couple, but these wizened veterans are such marvelous actors that they could probably read actuarial tables and make them compelling. And though the stars are smooth enough to rope us into their late autumn romance, even these skilled thespians can’t overcome this script’s basic, head-scratching implausibility.

Bening plays Nikki, a widow still shell-shocked over the loss of her architect husband Garrett (also played by Harris) who drowned on vacation to Mexico five years ago. Encouraged to break out of her mopey isolation by the gentle prodding of her daughter (Jess Weixler) and shyly adoring neighbor (Robin Williams), she makes tentative steps back out into the world. While strolling through a favorite museum she hadn’t visited in years, Nikki is startled to see what looks like an exact double of her late spouse. After some mild, slightly suspenseful stalking, the widow discovers that she hasn’t seen a ghost, but a freewheeling painter named Tom (also Harris) who just coincidentally bears an uncanny resemblance to Garrett. She builds up the courage to approach him, then awkwardly fumbles the first attempt to meet him — but Tom is strangely compelled by this woman, who looks at him with an intense, unexplained longing.

They begin dating, but Nikki must make some sneaky adjustments, hiding all the family photos and claiming that her husband merely “left” her. Eventually, the facade starts to crumble, as hints of her old life come peeking through, as when a sushi chef is happy to recognize his beloved customers back again.

Director Arie Posin co-wrote the script, so he has little excuse for the troubles he’s created for himself. For all the hard-fought realism, brilliant performances and the feelings stirred up by the themes of mortality and late-life romance, there is the inescapable silliness of the central conceit. There is much to admire, but what should be haunting and evocative ends up too close to soap opera fodder.

The Face of Loveis rated PG-13, runs 92 minutes and is in theaters now.