In this cop buddy flick, Sandra Bullock and Melissa McCarthy each hold their own but carve no new ground. 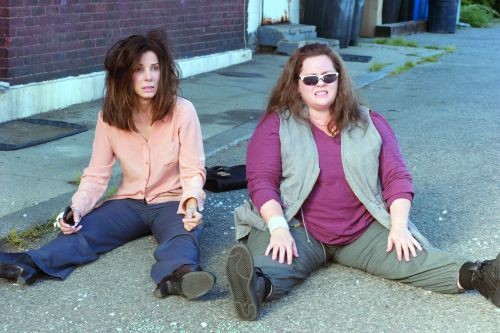 Another testosterone-driven genre (this time the cop buddy action flick) gets a kick in the pants from director Paul Feig, who previously pulled off the raunchy bachelor party comedy gender flip with Bridesmaids.

Now, instead of cat fights and party fouls, we’ve got a mismatched pair of funny ladies slugging it out with street thugs and drug lords, a spectacle that is amazingly still sort of novel, even though every scenario, set piece and comedy premise here is beyond familiar. What’s semi-embarrassing is there are still so few examples of female teams headlining action comedies that the premise alone is meant to generate laughs. Really, people: It’s 2013. Have we gotten nowhere since Cagney & Lacey?

Not that The Heat is terribly concerned with empowering the sisterhood, merely with generating guffaws — a task it achieves with decent frequency. Bullock plays exactly the same prissy, careerist fussbudget that she usually does in fluff romantic comedies, only this time she’s got a badge and a gun as FBI Special Agent Ashburn, pretty much a reprise of her work in Miss Congeniality.

Having greatly annoyed her co-workers and boss with her hyper-efficiency, Ashburn gets re-assigned to Boston where, much to her horror, she is paired with Det. Mullins, an abrasive, sloppy, rude and pugnacious local cop played with typical gusto by Melissa McCarthy.

The two go through all the routine story beats: They begin feuding, get into trouble with the brass, then have a night of boozy bonding and end up best friends forever by movie’s end.

McCarthy’s career has been expanding faster than the waistband on her sweatpants, though her screen act — that of an outrageously obnoxious, oversexed but secretly insecure bully — is getting old in a hurry. Certain film critics, like crotchety vet Rex Reed, have drawn heat for uncharitable comments about McCarthy’s weight, but it’s hard to dispute that the performer is consciously, skillfully exploiting her obesity for comedic effect.

There is no hint of self-consciousness in the way she hurls her excess body mass around the screen like an oversized pinball, making slapstick mayhem her calling card, as if she were Kevin James with a uterus. Actually, that’s unfair; with her unbearable persona she’s more like Danny McBride in a bra. Bullock, meanwhile, offers no surprises, but her timing is excellent and she manages playing the straight woman well, generating her fair share of laughs. The supporting cast is loaded with funny folks like Jane Curtin, Tom Wilson and Bill Burr, though there’s a half-point demerit for gratuitous use of a Wayans brother.

So far, local legend Feig has done his best work in television as an in-demand director for smart shows like The Office and Arrested Development, and as the creator of the cult masterpiece Freaks and Geeks.

This slapdash, underfunded affair doesn’t quite pull off the awkward, vulnerable humanity of Feig’s boob-tube stuff, but it does provide lots of coarse, audacious belly laughs, until the same gags essentially start repeating in a loop.

The Heat is in theaters now and is rated R with a running time of 117 minutes.