Film Review: The Inevitable Defeat of Mister and Pete

A look at the struggle two boys endure on the streets of Brooklyn speaks to a neglectful society. 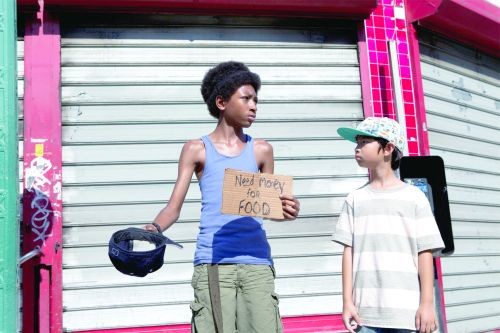 Director Lee Daniels could learn a thing or two about emotional modesty and understated messaging from George Tillman Jr.’s Inevitable Defeat of Mister & Pete. Unlike the melodramatic urban grotesqueries that populated his much-overrated Precious, Tillman’s depiction of two youths abandoned in a Brooklyn housing project during a sweltering New York summer has a quiet immediacy that communicates the tragedy of modern American poverty — without stooping to manipulative sentimentality.

Mister (Skylan Brooks) is a scowling 13-year-old who has learned over the course of his short life that adults are not to be trusted and the only person you can count on is yourself. And who can blame him? He’s failing school, his mother (Jennifer Hudson) is a junkie and prostitute, and his neighborhood has more than its share of pimps, drug dealers and thieves.

Random appearances by the police mean arrests for the parents and a child detention center at Riverview for their kids. The two things that keep Mister going are a defiant spirit and the dream of becoming an actor. A movie-buff who has dedicated himself to performance, he dreams of being cast as a child actor in a Beverly Hills television show.

When the cops bust his mother, Mister is left alone with Pete (Ethan Dizon), a young Korean boy who’s been horribly neglected by his junkie mom. The two couldn’t be more different. Where Pete is timid, prim and sweet-minded, Mister is suspicious, explosive and hostile — ready to lash out at those who thwart him. At first hostile to the smaller, weaker kid, Mister eventually becomes Pete’s friend and de facto guardian as the two struggle to keep themselves fed, dodge the authorities, steer clear of belligerent hoodlums and wait for Mister’s mother to return.

Part urban adventure and part grim test of survival, the parentless boys face one hardship after another as their options slowly dwindle away. Their only lifeline, tentative as it is, is Alice (Jordin Sparks), a woman who escaped the projects only to find herself trapped in an unwanted relationship with a married man.

Set up as a series of vignettes, Michael Starrbury’s screenplay stays even-keeled and convincing, throwing realistic obstacles in the way of the boys’ happiness. And with each bad turn, Mister and Pete grow dirtier, weaker and disturbingly thin. Unfortunately, with too little narrative drive, aimlessness sets in and the episodic nature of Starrbury’s storytelling grows wearying. There’s not much of an arc to the film’s dramatic incidents and so we’re left mostly with the relationship between the two boys.

And it’s here that Tillman has struck gold. Brooks and Dizon have genuine chemistry, delivering three-dimensional performances without childish affect or gimmicks. As good as the supporting cast of adults is, the boys have the rare ability to dominate every frame of the film they’re in, yet present a friendship that never feels less than authentic.

In the end, however, it’s Brooks’ show and he refuses to break character to win our affection. Always true to Mister’s combative nature, he wins our sympathy and respect over time by revealing the decency that has been calloused over by his hardscrabble life. Only at the end, when he learns that no matter how hard he fights, he simply cannot make it on his own, do we see the vulnerable child beneath emerge. It’s enough to break your heart.

The Inevitable Defeat of Mister and Pete may occasionally clumsy in its execution but its intentions are both clear and laudable. Instead of violently plucking at our heartstrings, or demanding a call to action, it lets the everyday struggles of two all-too-real children in America — in one of the richest cities on Earth — demonstrate how society is falling inexcusably short of taking care of those who need help the most.

The Inevitable Defeat of Mister and Pete is in theaters now and is rated R with a running time of 108 minutes.