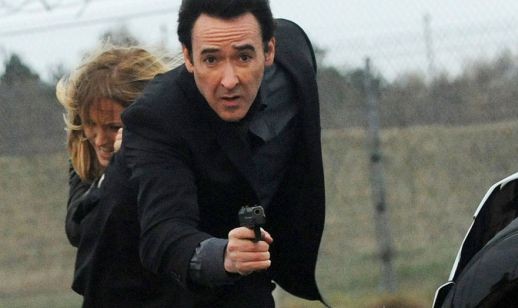 John Cusack has always radiated an air of detached, cynical wit, like he’s constantly preparing a lacerating quip and a swift exit from any situation. In the curiously nondescript The Numbers Station, Cusack exudes little more than undisguised boredom, as if he was waiting for the drab material to catch up to him. It never does, nor does the on-the-button script offer the coolly sarcastic Cusack a chance to flex any of the comedic chops that have served him so well over the years.

Cusack plays Emerson, a world-weary government sponsored assassin (is there any other kind?) who has begun to doubt if ending people’s lives is the best use of the rest of his. He’s exactly the sort of hollowed-out moral shell that Cusack’s character in Grosse Pointe Blank might have become if he’d stayed in the game. Having displayed a sudden lack of nerve, Emerson is reassigned to a supposedly more relaxed gig at an old World War II bunker in a remote corner of the English countryside. He’s tasked with guarding Katherine (Malin Akerman) a lovely young “broadcaster,” who dispatches instructions to agents in the field via numeric codes on shortwave radio. Everything’s rosy between the pair, until the station is attacked, and bogus assassination orders are transmitted by the unknown invaders, forcing the heroes to try to undo the damage — if they can survive long enough.

This is the Hollywood debut for Danish director Kasper Barfoed, and he does a fairly solid, unpretentious job with a limited budget, and with the action mostly contained in dank, dark underground settings.

The problem is F. Scott Frazier’s formulaic script that is so stark and efficient that it leaves little wiggle room for Cusack and Akerman to develop the chemistry they show flashes of. The plot also feels recycled, like a Cold War relic, with the bad guys referencing “working for the other side” as if their paymasters were still operating behind the Iron Curtain, or that the world was still neatly divided into an easily understood “Us vs. Them” dynamic. The lack of compelling motivation for the villains just adds to the inoffensive but disposable quality of the proceedings.  Ultimately, this too-routine spy thriller attempts to pose pseudo-deep questions about loyalty, trust and honor, but fails to answer the most crucial and nagging existential riddle about itself: Why does it exist?