Film review: Wish I Was Here 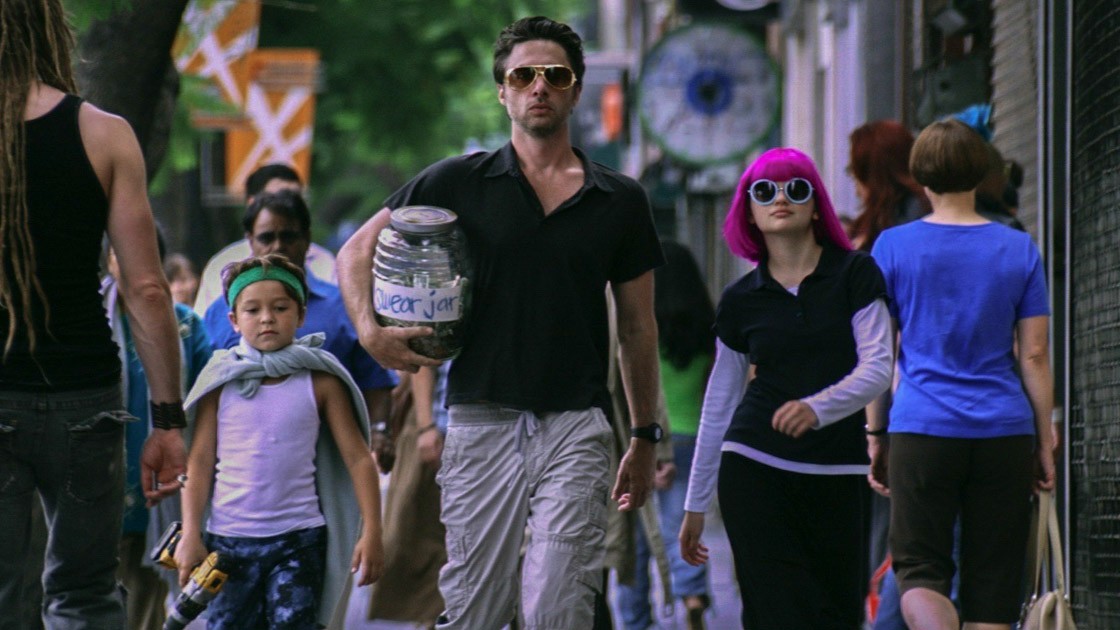 WELL, I GUESS 47,000 PEOPLE now know what Harvey Weinstein must feel like when he produces a mediocre indie dramedy that’s destined to yield disappointing box office returns. Of course, those who donated to writer-actor-director Zach Braff’s Kickstarter campaign weren’t looking for financial gain. They funded the sitcom star, well, most likely because they loved loved loved Garden State. Which means they knew what they were getting into — another sweetly sentimental, fitfully humorous, and completely unchallenging night at the movies. On that front, Wish I Was Here delivers in spades.

Had Braff developed his film through the normal channels, however, it seems unlikely that he would have been forced to compromise much on his vision. Oh, sure, the producers would have asked for the story to be a tad less Jewish, but the upside is that he would have been talked out of the film’s awkward flights of CGI-enhanced fancy. Look, I’m all for artists raising funds however they like — even the mediocre ones — but using Kickstarter to avoid script rewrites seems like an artistic miscalculation.

And that’s where Braff’s unabashedly earnest effort seriously stumbles. Sharing writing duties with his brother Adam, he’s concocted a James L. Brooks-style sprawl of half-developed subplots, clumsy tonal shifts, nerdy humor, and, occasionally, moments of affecting truth. It’s those instances — like when Kate Hudson has a deathbed heart-to-heart with Mandy Patinkin — that the movie really shines. Too bad there are so few of them. Instead, Wish I Was Here spins its wheels with sitcom antics and a protagonist who barely changes over the film’s nearly two-hour running time. Whenever the comedy loses steam and the emoting gets too much, the movie queues up another indie-emo-fueled montage to fill the emotional gaps. Which poses the question: What would Zach Braff be without the Shins?

Aidan (Braff) is a struggling, self-centered L.A. actor with no day job and a frustrated wife, Sarah (Hudson), who supports their family. When Aidan’s ailing dad, Gabe (Patinkin), decides to pursue a last-ditch cancer treatment, he can no longer cover the grandkids’ Hebrew school tuition. This leaves Aidan aghast at the prospect of public school and scrambling to home-school his defiant 6-year-old, Tucker (Pierce Gagnon) and his older, more devout daughter, Grace (Joey King). It also means trying to ready his stoner geek of a brother, Noah (Josh Gad), for Gabe’s impending death.

If Braff had restrained and focused Wish I Was Here to that narrative, it might have done a halfway decent job of tackling the daddy issues and privileged anxieties of thirtysomethings who struggle to mature. Unfortunately, there’s Aidan’s Walter Mitty-like daydreams and Sarah being sexually harassed at work by her cubicle mate and Noah’s crush on a neighbor who’s a cosplay furry, and a dog that whizzes where he shouldn’t, and Grace’s religious rebellion against her secular parents, and Tucker sleeping with a power drill, and lots and lots of evocative shots of L.A. set to a Pitchfork-inspired soundtrack.

The film never really gets to the heart of Aidan and Noah’s failings, choosing instead to solve their problems with fortuitous twists of fate or fortune-cookie lectures. It’s not quite a sitcom view of life, but still surprisingly shallow. For instance, for all the character’s talk of economic stress, Aidan’s family doesn't seem to have to sacrifice a whole lot. Their economic situation seems more a crisis of ego than checkbook.

And the film’s true subject — how the regret, bitterness, and sense of loss that accompanies the death of a parent can challenge a person to change — gets sidelined by Braff’s fussy comic detours. For every moment you wish would go longer — like when Aidan and Sarah discuss how their lack of spiritualism has left them unprepared to talk about death with their kids — there’s a gag like a rabbi running his Segway into a wall.

If there’s a grown voice in all of this, it’s Patinkin, who delivers a soulfully realistic portrayal of an Orthodox man who used what limited tools he had to raise, provide for, and help screw up his kids. Amid Braff’s sentimentalism, it’s an uncompromising performance that speaks to an older generation’s judgmental sense of pride and the decency hidden beneath. Kudos should also be handed out to Hudson, who demonstrates that, despite a career filled with inane romantic comedies, she’s an actress worth considering for more.

If you were one of the many who helped make Wish I Was Here come to fruition, or if you’re just a fan of Garden State, you’ve probably already been won over by Braff’s mix of aching sincerity and mordant whimsy. Wish I Was Here may ultimately be a superficial treatment of real human experiences but, hey, it got that way without any studio meddling. That counts for something, right?

Wish I Was Here is now playing at the Main Art in Royal Oak. It’s rated R and has a running time of two hours.