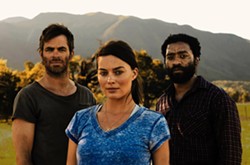 Z for Zachariah / B

Even after surviving the apocalypse, man will find a way to screw things up. And when I say man, I really do mean men.

In Craig Zobel's film adaptation of Robert C. O'Brien's posthumous YA novel Z for Zachariah, Ann (Margot Robbie) is the innocent yet tough survivor of an unnamed cataclysm. The remote valley she lives in with her dog has miraculously been spared from radioactive contamination. Occasionally, Ann puts on protective gear and heads into the nearby abandoned village for supplies and books. One day, she encounters a high-tech looking cart. It belongs to John Loomis (Chiwetel Ejiofor), a scientist in a radiation-proof suit, who has been looking for signs of human life. Excited to find sanctuary, he accidentally bathes in contaminated water and must be rescued by Ann. As she helps him recover, an intimacy sparks between them, even as the two try to negotiate their obvious differences. He's older and, most especially, a man of science. She is less worldly and devoted to her faith. These differences are tested even further when John suggests that the wood from the chapel Ann's father built could be used to harness energy from a nearby waterfall.

Nissar Modi’s script tends to overplay (and overwrite) the characters' friction of faith, but also provides these two great actors with long stretches of silent interactions. We can feel the weight of loneliness and sexual curiosity hang between them, as each, tentatively and respectfully, moves toward the other. After a summer of frenzied action and extravagant visions of post-apocalyptic survival, it's refreshing to watch a movie that focuses on the way relationships develop in such a setting.

Of course, the references to Adam and Eve and the fall of Eden are hard to miss. Which makes one wonder if the sudden appearance of Caleb (Chris Pine) is meant to be seen as the serpent who sows the seeds of discord or a reminder that Ann's faith is in danger of being undone by John's rationalism. Scruffy, folksy, and with eyes bluer than blue, Caleb's a more obvious match for this stalwart country lass. To boot, he's handsome, local to the region, and white (a fact that gives Ejiofor his best line). More importantly, Caleb claims to share Ann's faith even as he uses John's stoic practicality against him. It's not surprising that the two men — possibly the last on Earth — start eyeing each other warily.

Zobel favors long takes and close-ups to reveal the conflicting emotions that lie beneath Ejiofor's and Robbie's surfaces. As a director, he recognizes the power of nuance and ambiguity, allowing the film's early scenes — and ultimate conclusion — to breathe with tension, subtext, and possibility. Unfortunately, that aesthetic is diluted by Caleb's arrival. While the men's aggression toward one another is handled with subtlety — nothing is ever mentioned, but the dynamic is clear and ominous — the drama becomes obvious and flat.

Worse, it derails Z for Zachariah's more interesting examination of faith, reason, and romantic passion. Zobel and Modi seem to misplace the story's setting, theme, and protagonist, never fully connecting their post-apocalyptic world to the interpersonal conflicts and, more tragically, pushing Ann to the margins of her own story. There's much to be said about the film's admirable respect for spiritual faith — what it means, how it provides sustenance, how it can be manipulated — but Zobel mostly abandons that in favor of third-act alpha-male positioning, as the men jockey for Ann's trust and affections.

It's only in Z for Zachariah's perfectly ambiguous conclusion that Zobel's talents come roaring back into focus. You may not wonder what happened — it's pretty clear — but you will wonder where things will go next. And that's a worthy discussion for a movie to inspire in its audience.

Cinema Z for Zachariah YA film