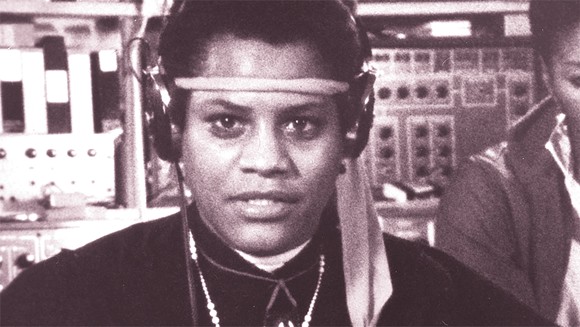 Since its release in 1983, Lizzie Borden's Born in Flames has stood as a landmark of indie cinema. Shot sporadically on a shoestring budget over five years, the film creates an energetic, complex, post-Godard, post-punk collage of feminist factions, who work together to disrupt the messages of an oppressive, patriarchal government. Its cult following includes Kathleen Hanna, who has spoken eloquently and at length on its importance. There's a significant body of scholarship surrounding it too: Women and Performance: A Journal of Feminist Theory dedicated an issue to the film in 2013, and Wayne State University Press published the critical study Feminist Hollywood: From Born in Flames to Point Break in 2000. Once categorized as dystopian science fiction, Born in Flames is timelier than ever, with some chillingly prescient moments. Borden, who is originally from the Detroit area, will screen the recently restored film at the Museum of Contemporary Art Detroit, followed by a Q&A.

Metro Times: How do you see Born in Flames in relation to the situations of the present day?

Lizzie Borden: It’s interesting because a lot of times people do think of it as science fiction, but the only science fiction element of it is one premise: that it took place ten years after a democratic cultural revolution in the United States. In the art world at the time [of filming], there were various movements, talking about Communism and Social Democracy. Groups like Art and Language. One of the members of Art and Language, Mayo Thompson [of the Red Krayola], actually wrote the song that [the title] Born in Flames came from. I was going to call it Les Guérrillères after the Monique Wittig novel, but I was afraid that people would call the film “The Gorillas.” Anyways, what I kept thinking in all of those Marxist and Communist texts were that they referred to the “woman question” or the “woman problem.” I thought, “What if there was a move to the left, and women were still a problem?” Let’s create a situation where women are still second-class citizens. What would women’s response be to that problem? And then I thought, I’m not going to change anything else. New York is going to look just like it did in 1983. Ironically, New York in 1983 probably looks like parts of Detroit in 2017. I haven’t been back to Michigan since years ago!

But there are no other science fiction elements, to the point where when Born in Flames was shown very briefly on Netflix, really angry guys would write in and say, “This is the worst science fiction film I’ve ever seen!” Because it really wasn’t science fiction, and it wasn’t meant to be dystopian. It was almost meant to be utopian, but with people having so many problems, especially women who are marginalized by policies that were not serving them. What really shocks me is that after so many years, the problems still exist. When I made the film, when Reagan was president, I had no idea that this psychopath would be president, where so many issues are worse for women and for everyone else. So many things that we thought would be resolved are not only not resolved, they’re getting worse by the day.

I made Born in Flames kind of as agitprop, as a call to action. I see it now maybe as a call to action to millennials, the post-Occupy Wall Street generation, who now are citizen journalists, who would not have to go to the extremes that the women in Born in Flames went to, because they all have iPhones [laughs], and there’s a way to communicate. And they do. Actions like the mass demonstrations at the airports, for example, were organized through social media.


“What would you rather see come through the door: one lion or five hundred mice?” tweet this
MT: I’m interested in the political and social environment of NYC of the '70s and '80s, and how that comes through in the film.


Borden: I come from the art world. And I was very politicized by the second wave of feminism, but what I realized was that feminism in itself was a difficult and tricky word, because it really reflected women like me who were just white and middle class. The art world was very patriarchal. A lot of the artists I was interested in, like Joan Jonas, Yvonne Rainer, a lot of the dancers, Carolee Schneemann, their work was seen and valued as second-rate. I thought, wait a second, something is wrong here. And then I saw that all around me, downtown, it was an extremely exciting place. Artists and painters and musicians, and theater artists, were all working on each other’s stuff. But we were all white. And we were all kind of middle class. So I wanted to make a film that was multiracial, cross class. These days they would use the word intersectionality, but that didn’t exist then. Even the word “feminism” was suspect, because that was a white word, and at that point black women used the word “womanism” and did not trust white feminists as epitomized by Gloria Steinem and Ms. magazine, which seemed way too middle class. I wanted to make a film where I didn’t have a script, because I didn’t want to put words in the mouths of black women. I wanted this to evolve, not as something collectively — I was still going to be the person who edited it and put it together. But I wanted women to have their own voices, and often simultaneously. So I started to find women, at the YMCA, at gay bars, and that kind of happened. It was really about the idea that there could be simultaneous voices that are after the same thing. That’s what I find problematic, even now. Which is that there are so many women who are marching, and that’s great. But there are women who speak of resistance in different voices, and I think those voices should be heard as a corral, rather than at each other, and that’s something that’s said by [the real-life activist] Flo Kennedy in Born in Flames: “What would you rather see come through the door: one lion or five hundred mice?” In the agitprop world of Born in Flames it’s, “Let’s work side by side.” Each woman is a link in a chain link fence to resist.

MT: Why did it take five years to complete?

Borden: It took five years because I started with only the premise, and I had no money! Whenever I had $200 I would shoot. When I started, I basically knew the women who played the Socialist News editors: [pre-fame] Kathryn Bigelow, Becky Johnston, and Pat Murphy. I began by shooting scenes of women’s groups meeting, so that I knew what some of the current issues were. Gradually, a story started to emerge on the Steenbeck, the flatbed editing machine. I was working maybe seven or eight hours a day on the editing machine, which was a form of writing a script. I would gather people and we would shoot a scene, I would edit it, and from that scene I would write a fictional scene based on some of the material we had. Or we would go to a demonstration, for example, and I would ask my characters, to go and I would act as if they were there, my characters in a real demonstration. Other times we might stage a false demonstration with the characters, and real people would join in. I wanted everything to grow out of this material, which is the opposite of the way films are actually shot. It wasn’t a documentary, because I wasn’t documenting a story. I wanted each woman to have her own unique voice. We would work in an improvisatory way. For a scene, I would give general direction, but the actors would use their language in their own specific way. Part of that was in response to the fact that the dominant voice that I was reacting against, and the reason I made the film was that Ms. magazine, white, middle class feminist voice was dominating everything when I started to make the film. I thought it was alienating so many other women from feminist issues, even from the word “feminism.” I wanted there to be multiple voices. That’s part of the way Born in Flames was constructed in the end: with a lot of voices going at the same time. And with music — also playing at the same time, with a really pulsing movement. So even if you didn’t want to listen to the voices, you could get a sense from the pulse of the music that this film is about resistance, this is a film about fighting the powers that be.