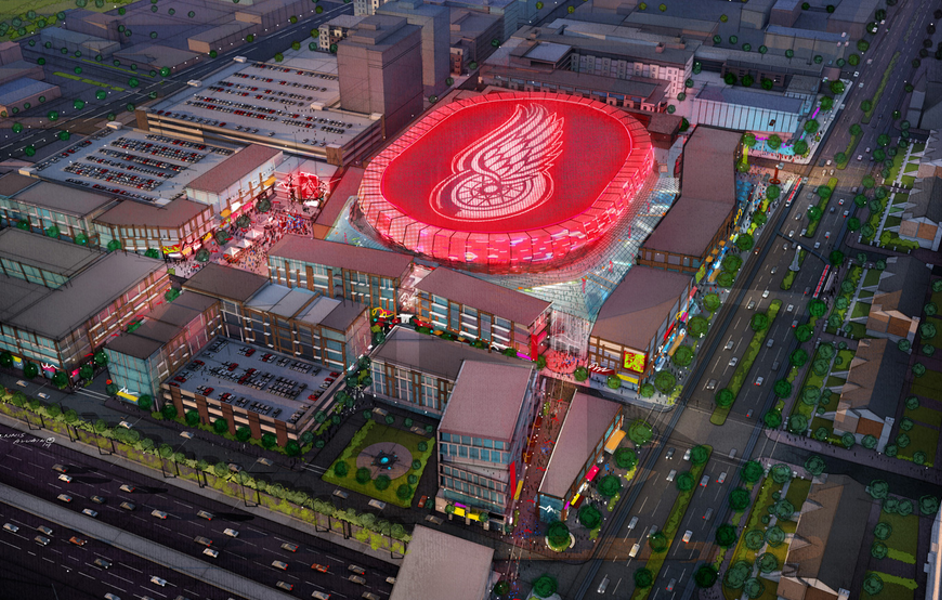 Apparently, constructing a financing plan that is tortuously complex is a badge of honor in Detroit. That seemed to be the sentiment last week during a meeting of the Detroit Downtown Development Authority (DDA). The meeting was held to consider a motion to sell $450 million in bonds to finance the construction of a new Detroit Red Wings arena near downtown.

But, for a moment, it appeared conversation on the matter — taking place in public for the first time — would be limited: Tom Lewand, Detroit's executive of jobs and economic growth, urged swift passage of the resolution because, as a trained bond lawyer, he said he knows how complex these conversations can be.

And, he added, the DDA's finance committee had already recommended approval of the deal.

Nevertheless, the complexity piqued the interest of some DDA members who asked questions that made it easier for some in the audience to digest what was being discussed. (Without any questions, the public would be left to understand the deal through a dense 66-page document released after the meeting.)

The financing plan approved by the DDA, and later by the Michigan Strategic Fund (MSF), the state entity that will issue bonds for the project, calls for a revised structure unlike the preliminary proposal approved last year. The revisions are significant.

For instance, the $15 million cap on state school taxes that can be captured by the DDA to pay off bonds has been lifted. And the DDA may enter into a financial bet known as an interest rate swap, a gamble that previously cost the Detroit Water & Sewerage Department $571 million to back out of.

Understanding the structure of the deal to finance the arena takes a bit of work — a point acknowledged by a number of officials and project backers during the meeting.

In layman's terms, what's going on here is a daisy chain of borrowing: The DDA will sell $450 million in bonds to the MSF. In turn, the MSF will sell those bonds to finance the construction of the arena. The MSF bonds will be paid off by three revenue streams: $15 million or more in state school taxes the DDA can legally capture, $2 million in a separate DDA tax capture, and ODM's annual $11.5 million fee.

Public funds will account for 53 percent of the arena cost, at $285 million; Olympia Development of Michigan, the real estate arm of Ilitch Holdings, will account for the remaining 47 percent, at $250 million, which includes funds the company has spent acquiring land on the arena site.

The specifics, according to a Sept. 10 report to the DDA's board of directors, are as follows:

The DDA will sell $450 million in bonds to the MSF that will be separated into two groups: $250 million in 30-year tax exempt bonds, and $200 million in 30-year taxable bonds. Under state law, the DDA can capture the increased property tax revenue generated as a result of new development, called tax-increment financing, or TIF. As a result, $6 million to $10 million that would have gone to pay for city services like police and fire will instead be "captured" by the DDA.

In turn, the MSF will issue $250 million in tax-exempt bonds that will be purchased by Bank of America. These bonds will be repaid by at least $15 million in tax money that otherwise would have gone to schools statewide, and a separate $2 million annual DDA tax capture. But, in a surprising development, the schools might suffer an even bigger loss. That's because a cap on the amount of school money going toward the project has been lifted. The cap came off because Bank of America insisted that it be removed, otherwise it would not agree to purchase the bonds.

The MSF will also issue $200 million in floating rate bonds that will be purchased by Comerica. These bonds will be repaid by the $11.5 million annual fee paid by Olympia. According to the loan agreement with MSF and the DDA, these bonds can only be repaid with Olympia's arena revenues. Meaning: The DDA won't have to come up with the money if Olympia's arena revenues fall short. But, as Metro Times first reported earlier this month, the DDA anticipates it will enter into an interest rate swap on the $200 million in bonds issue secured by Olympia.

The swap deal adds a potentially dangerous risk to the DDA — and, hence, taxpayers. The swap, essentially a financial gamble, would allow the DDA to synthetically fix the interest rate, and assumes a benchmark interest rate used by financial institutions across the world will rise, rather than fall. The swap would last until the bonds are retired life in 2045. In return for the fixed rate the DDA will pay a yet-to-be-named counter-party (that will be later identified by ODM), the DDA will receive a variable interest rate payment from the counterparty based on LIBOR, the London Interbank Offered Rate, an interest-rate benchmark. Last month, the DDA sought a swaps adviser on the deal, and, according to documents, selected New York City-based firm Mohanty Garglulo.

Heber Farnsworth, associate professor of finance at Penn State University's Smeal College of Business, previously told Metro Times, if the DDA actually pursues the swap, the authority would come to an agreement with the counterparty as to what both sides believe the LIBOR rate will be when the swap kicks in — likely in 2018. If the DDA's gamble heads south, Farnsworth offered a possible worst-case scenario: For instance, if the LIBOR rate drops, the DDA could be stuck with paying a fixed rate, while receiving a smaller amount in return from the counter-party. If that happens, and the DDA is on the "losing" side of the bet, it might have to post collateral — similar to how Detroit posted its casino revenue when the city's infamous interest rate swaps went sour.

Detroit agreed to spend $85 million to terminate its swaps agreement with Bank of America and UBS; the Detroit Water & Sewerage Department had to spend a whopping $571 million on termination fees for a sour swap. As the banking industry was deregulated in the mid- to late-1990's, swaps became more popular for municipalities. In Detroit's case, it's unclear if the city has ever ended up on the winning side of a swap — if it has ever even allowed a swap to last its entire lifetime without having to terminate it.

DDA officials point out that interest rates are expected to rise in the near term. But, as Farnsworth admits, over the next three decades, LIBOR is expected to rise and fall — again and again. If rates are pushed as low as they have been since the 2008 recession, then the DDA may end up on the losing side of the swap, forcing it to guarantee payments. Under the same kind of agreement, Detroit previously had to turn over casino tax revenue as collateral when its swap turned sour. If the DDA were to then miss a swap payment, the counterparty could simply "seize all the collateral," Farnsworth says. But whatever the DDA could possibly post as collateral is entirely unknown. Details of the swap deal are supposed to be presented to the DDA board prior to the $200 million floating rate bond sale.

One topic that also hasn't appeared in public discussions is the potential impact of inflation. Writing for Athletic Business in 2012, Andrew Cohen notes the case of Marlins Park in Miami, which was initially pegged at a $510 million total price tag. But, according to Cohen, because of the way the deal was structured, it will end up costing taxpayers $2.4 billion over the next 40 years. Detroit, with its new arena, could face the same sort of risk. Adjusted for projected inflation, the Detroit DDA currently projects it will spend $552.5 million in public dollars on the new arena, but it's unclear how much the final public costs for the arena will be. According to plans released by Olympia, the new 785,000-square-foot arena will be situated in an area bounded by Woodward Avenue, Henry Street, Sproat Street, and Clifford Street. A groundbreaking is slated later this month, with the majority of construction work expected to begin next spring. Project backers say the arena will open in time for the National Hockey League's 2017-2018 season. — mt