Martin Sheen and Emilio Estevez talk life, family, the road and their new movie about it all 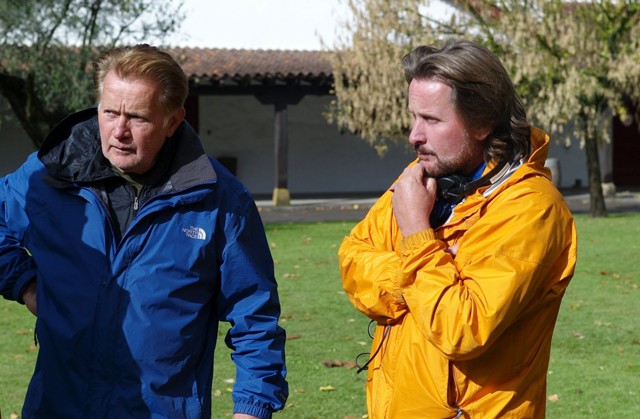 For a guy who’s been arrested 67 times (and never convicted once, he points out), Martin Sheen is probably the nicest guy you’ll ever meet. Looking a decade younger than his 71 years, the man who was born Ramon Estevez and his son Emilio (also showing no sign of his 49 years) are on a 50-day U.S. bus tour promoting their new film The Way. It’s a clever parallel to the spiritual journey Sheen’s character takes along Spain’s Camino de Santiago, and sign of how much things have changed in the world of American cinema. Though Sheen may be a Hollywood icon (his Jeb Bartlett brought cathartic peace to many a liberal during the Bush years) and Emilio was an original member of the Brat Pack, both are out selling their indie flick to the masses, acting as a two-man marketing team.

Pulling up in Ann Arbor, at the tail end of their trip, the father and son are … well … bubbly. Sheen has a big, throaty laugh that fills the room and it doesn’t take much to get him going. Emilio is cheerful but low-key. Both are incredibly gracious, asking as many questions as they answer. And though father and son have spent nearly two months on a bus together, they are clearly having a great time, offering up stories about people they’ve met on the road and finishing each others’ sentences.

Metro Times: Emilio, you say you wrote this movie for your dad. What does the film say about your own relationship — if anything?

Martin Sheen: It says his dad needed a job.

Emilio Estevez: Well, I grew up on location. I never spent a whole year in school—

Sheen: — Now it’s all pouring out.

Estevez: I never spent a full year in school because my parents felt that the family needed to together in order to actually stay together.

Sheen: And we didn’t believe in school either.

Estevez: So, I grew up in the back seat of a—

Sheen: —Greyhound bus. [laughs] Actually, I think the song goes that you were born in the back of a Greyhound Bus.

Estevez: No, really. He’d pile us into the back seat of a station wagon and off we go on location. And for every Badlands there were 10 other movies that no one saw.

Estevez: There was a lot of gigging because there were five other mouths to feed and he had to keep it going. There was a point when we were living in Malibu and my mom said, “Where’s the money, I need to do some shopping?” And my dad says, “I thought you had the money.” And they had no bank account and they started looking through their pockets and they had a dime. One dime. And four children.

Sheen: And we split it evenly.

Estevez: Here’s what’s insane. That day, a letter arrives with $10, from a guy who owed my dad from when we all lived in New York City. So, I grew up watching my dad—

Sheen: —waiting for the mail.

Estevez: Going from hand to mouth, job to job. I wanted to write something for him that was a reflection of who he is, his better angels. And many times, during his career, I saw that it wasn’t celebrated the way it deserved to be. So, I’m not sure I really answered your question but it was what drove this project.

MT: You seem to have made a choice to focus on your filmmaking career.

Estevez: I’ve always wanted to tell stories. My first submission as a writer was when I was 7 years old. I sent a script to Universal Studios on notebook paper, written in pencil. And I was rejected, of course. But even as I was establishing myself as an actor, I was constantly thinking about books I wanted to make into movies. And then when I finally started, I was probably too young. I was writing scripts and making films about things I knew nothing about. But since I’ve had my DGA card for 26 years now, I feel somewhat entitled to make a movie like this one.

MT: Do you prefer it to acting?

Estevez: It’s a different muscle. Danny DeVito calles it “death by a thousand questions.” But, you know, making the film is the easy part. The marketing and promoting of it … man, we are essentially our own studio. We’ve been screening it and testing it with audiences and … it’s been an education.

MT: It sounds a little bit like all those years of gigging.

Estevez: Yeah, but you’ve got to put your balls on the line. You can’t lead with your head on something like this or you’re going to get knocked down. But if you bring one up from the depths of your … nutsack, you’ve got a shot.

MT: Martin, you tried your hand at directing a feature once, right?

Sheen: There’s only a few guys that do it, right? Clint. Rob Reiner. Bob Redford. But not for me.

MT: I want to talk about earnestness. It seems to be a quality that runs in both of you, but comes out, to my eyes, in different ways. Martin, it seems to express itself through your personal life, through your political activism. Emilio, it seems to permeate much of what you’ve done as both an actor and, most especially, as a filmmaker.

Estevez: The truth is I’m incredibly optimistic. I mean, I can go to a dark place. Everyone can. Pessimism and cynicism are low-hanging fruit and everyone grabs for it. It’s reflected in our politicians and our media. I want to go higher on the tree. I’m a winemaker so I know the difference between rotting and fermenting fruit. I like to think that the way I live and the films that I make are a reflection of that. I’m not edgy. These are my cave drawings. I’ve just added electricity to them.

Sheen: I think it’s an effort to lead an honest life. I think we’re all looking for identity, for a way to find meaning in our lives. And for me that’s reflected in my faith. My interest in social justice is what’s led to so many arrests. But speaking truth to power is what we’re encouraged to do in the Gospels. It wasn’t always the case, but for the last 30 years, since I became a Catholic, I’ve embraced a voice for the marginalized. And it’s not easy. It’s going to cost you some.

MT: Charlie’s issues aside, as celebrities you’ve both have had to deal with your own fair share of public scrutiny. Have you developed a personal or family philosophy about public scrutiny?

Sheen: We come from a place where it’s always personal. We stand for each other and we’re always there for who is in the most need at the time. Those are the ones we hold the closest. That’s what we’ve always done. We’re a family first. But the public scrutiny is something that can drive you nuts. If I was worried about what anyone thought, outside of the family, I’d be afraid to leave the house. I think you’ve got to have a sense of humor about it. I think you’ve got to know that that’s an image. It’s not who you are. And as long as you don’t get swept up with it — because you’ll be carried away — you have to let it go, let it run its course. It’s like I said, if you’re looking to lead an honest life, you have to unite the will of the spirit to the work of the flesh. [to his producer] You didn’t think I’d slip that in today, did you?