First Look: Here's what's on the menu at the soon-to-be revived Caucus Club 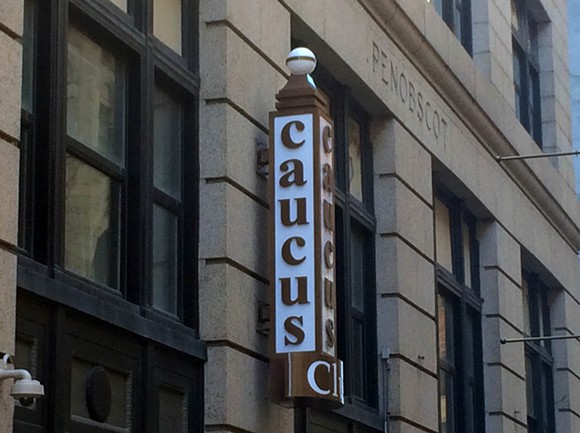 One of the first things people ask restaurateur George Sboukis about the Caucus Club, the once-venerable Penobscot Building restaurant that he's reviving, is whether the new version will feel like the old establishment, which shuttered in 2012.

In its heyday, the Caucus Club became an iconic Detroit brand - your classic, fancy auto exec expense account restaurant that many considered to be among the city's best upscale spots for steak and seafood.

But after decades of remaining in the city's upper echelon of dining, it slowly declined in its final years, which many attribute to mismanagement. Sboukis purchased the gutted restaurant and brand two years ago, redid the interior, installed a top-of-the-line kitchen, and is preparing for an April opening.

So what will diners find when they visit the new Caucus Club? Something like the old restaurant at its peak? Or will it be another small plates eatery with edgy interior that are of the moment in Detroit?

Expect the former.
"It's like when Ford wanted to do away with the Mustang and replace it with the Probe. It's like 'No, you're not going to sell that.'" Sboukis tells MT. "You can't get rid of an iconic brand in this city."
Once that's settled, people always seem to ask about the perch. Everyone loved the Caucus Club's perch, Sboukis says, and they want to know if it'll be on the new menu. Indeed, it will. The yellow belly Michigan lake perch, which is lightly floured, sautéed, and served with with fresh lemon and caper beurre blanc, is among several dishes similar to items on the old Caucus menu, but possessing little more of a modern and adventurous look.

That's the general thrust of the menu, which Sboukis and chef Rick Hussey are in the process of finalizing. The two met through their kids, who attend the same school, and Hussey's metro Detroit career spans 20 years. Most recently, he ran the kitchen at Fillipa's Wine Barrel, and the Detroiter's resume also includes spots like Intermezzo and the Detroit Princess Riverboat, among others.
Perhaps the most exciting part of the menu are the dry age selections. The Caucus Club's gleaming new kitchen includes a butcher shop and dry age room with a wall of Himalayan salt, all of which can be viewed from the Penobscot's hallway.

The 24-ounce tomahawk rib eye will be carried on a 12-inch bone and dry aged for 30 to 55 days before it's done on the Caucus's wood-burning grill. Hussey says the porterhouse and t-bones will sit for 14 to 20 days in the dry age room, and Hussey's crew will cut the sirloins and rib eyes itself.

The new kitchen also allows the Caucus to make almost everything - right down to the bread - from scratch, as all the best tools and equipment are in there, and Hussey's eyes are bright with anticipation as he looks around his new kingdom: "It's beautiful in here," he says.

Aside from the steaks, Sboukis notes the braised short rib, which will be cut and fabricated in house, then prepared in the combi oven to help retain moisture. Caucus will prepare it similar to an osso buco dish, and wrap the meat around the bones to add a unique visual dimension.

"That's one of the things that I think will set us apart - our presentation," Sboukis says, adding that most of the plates will reflect the season - brighter and spicier in the summer, and richer come fall and winter.

The osso buco will land on the more traditional end of the Caucus's spectrum, and Sboukis also highlights his favorite fish - halibut, which will be pan seared with a watercress puree.

On the side, expect accompaniments like potatoes dauphinoise, twice baked potato, and variations on asparagus, spinach, and broccolini. And Sboukis also notes his and Hussey's inclination toward the Mediterranean when it comes to recipe building.

That's evidenced in the general simplicity, and dishes like the mint tagliatelle with lamb, or the blackened Scottish salmon with Israeli couscous, asparagus, red peppers, and a fresh herb yogurt.

The general preference for the traditional is also found in the ambiance. There's no exposed ductwork and bricks at the new Caucus Club, but what one would expect at a more traditional, tasteful high-end restaurant. As Sboukis put it: "Classical never goes out of style."
"I'm not a big fan of the whole hard surface, hole-in-the-wall industrial looking spot - a restaurant should feel like a restaurant," he adds.

But, at the same time, it's not a stodgy atmosphere, and Sboukis even built a stage. The stage might have been inspired by the little-told part of the story about Barbara Streisand's career-boosting performance at the Caucus Club - she was mad that she had to sing on the bar floor behind a column, Sboukis says.

He, along with his siblings and family, co-owns Louis' Chop House in New Baltimore, though the rest of the family is in a support role on this project. And Sboukis says he appreciates that support as it's a challenging effort on so many levels, but he adds that it's worth it as the Caucus Club holds too special of a spot in Detroit's history to go the way of the Coach Insignia.

"I fell in love with the romance of the whole thing. The whole energy - I just got sucked up into it," Sboukis says.