When it comes to waterside dining in Michigan, there seems to be a formula that just about every restaurant with a dock and nice view of the sunset follows: Buy a bunch of frozen stuff and drown it in a deep fryer. The food may be mediocre, but that's often forgiven if it's on a plate next to the water with some tartar and a lemon wedge. Add a vaguely nautical cocktail into the mix and pump Jimmy Buffet out of the speakers, and no one seems to notice what they're eating.

But, people — that ain't right. Especially in a region with dozens of restaurants that dot our shores from the Detroit River to Lake St. Clair to the St. Clair River to Lake Erie. With this kind of access to tasty perch and other Great Lakes seafood, it doesn't take much to do something interesting and tasty, and we searched out dockside spots that put in the extra effort. 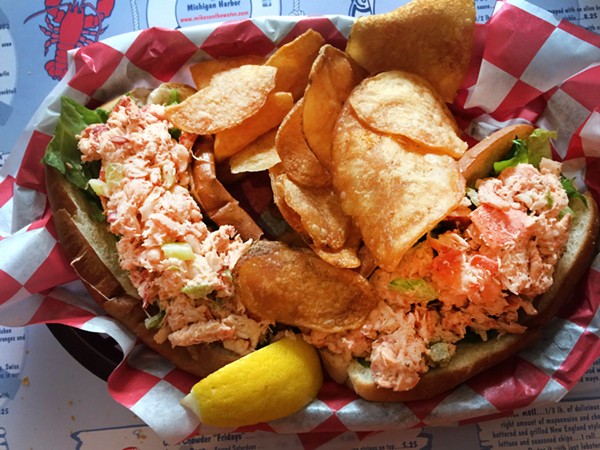 On the surface, Mike's seems like a standard-issue waterfront spot. It's got all the rigging, netting, life preservers with the restaurant's name stenciled across them, and a rooftop patio. The menu holds burgers, fish sandwiches, and so on. But there's a general agreement among us seafaring types that Mike's does it better. That's the case for a variety of reasons. First, the ingredients are of a noticeably higher quality. There's less frozen stuff, or maybe it's not frozen for as long. Whatever the case, Mike's serves Michigan whitefish caught in Lake Superior and perch pulled from Lake Erie. The filets come lightly blanketed in panko, or try the excellent smoked whitefish dip if you don't want fried fish. The lobster rolls and lobster bisque are made with real lobster — $34 per pound, owner Mike LeFevre tells us — not imitation lobster meat (or hot dogs of the sea, as we like to call them). Overall, there's evidence of a chef who put some real thought into the menu.

Mike's could also be a better spot because LeFevre is kind of a crazy guy. The good kind of crazy — the "hey, I'm going to put a food truck on my roof, because if America put a man on the moon, then we can put food trucks on the roof" kind of crazy. We appreciate that sort of thinking.

Armando's is the best dockside spot near Detroit to break from the usual formula. There likely aren't other kitchens on Lake St. Clair cooking pappardelle pasta dishes with lobster, scallops, shrimp, and a lemon cream sauce, or breaded saffron and parmesan risotto balls stuffed with fior de latte, and served with tomato sauce.

The restaurant, which is part of a small Windsor-based chain, specializes in pizza, and the spicy Sicilian with capicolla, salami, sausage, chilies, mozzarella, and tomato sauce is a solid pie that stands up to most across the river. We also ordered the mussels, which were fresh and served in a flavorful tomato-based sauce.

The menu isn't without the usual lake fare, but Armando's at least takes a different approach than its counterparts. The Frank Fish and Chips includes moist and buttery beer-battered whitefish that arrives in cigar-like form and speckled with herbs. These are excellent fish and chips, though we got ours served with steamed broccoli, which is a nice change from the usual pile of fries.

Keep in mind you're going to want to bring your passport, as Armando's is on foreign turf. It sits at the back of the Lakeview Park Marina, which is just on the other side of Belle Isle and Peche Island from Detroit. The trip is quick if you're departing from any of Detroit's marinas or boat launches. For an even better experience, grab a pizza to go and take it to Peche Island, which is about 100 yards away and only accessible by boat.

The tantalizing smell of grilling burgers wafts across the St. Clair River's Middle Channel and pulls you toward a waterfront bar with a small dock on Harsen's Island. That's Brown's. It's your quintessential dockside restaurant with a good selection of burgers and fish, like walleye and lake perch.

Getting there takes a little more time if you're launching from Detroit or the northern suburbs. It requires a roughly 45-minute trip to northeast Lake St. Clair. You'll then navigate the labyrinth of inlets and small islands that compose the mouth of the St. Clair River. While you'll enjoy the food at Brown's, the trip there is half the fun. The water in the Middle Channel, which cuts between Harsens and Dickinson islands, is always like glass. The islands are sparsely inhabited, making it feel like you're in a place much further from Detroit than you are. Because of that, the Middle Channel is one of the best spots for boating in metro Detroit's network of rivers and lakes, and Brown's is one of the best places to bite a burger.

If you're cruising through Anchor Bay on the northside of Lake St. Clair and you're in the market for heavily deep fried fish, fries, and a few beers, then Bobby Mac's is where you want to post up, and its best option is the lake perch. It's easy to access in the usually calm the north side of Anchor Bay. The day on the water is done, but you're not quite ready to dock for the night — it's time to go to Marshall's. If you own large yachts and sailboats, then you can't access it by sea. Instead you'll need to anchor your boat in the river, and drop in the water your jet ski, kayak, or small fishing boat. You'll then gingerly putter up Fox Creek in Detroit's Jefferson Chalmers neighborhood's canals. Fox Creek empties into the Detroit River at Mariner's Park, and runs parallel to Alter Road between the river and Jefferson. It dead ends at Marshall's, which is where you'll find your classic neighborhood dive bar with a pool table, weird collection of customers, and a bonfire pit in the back.