A family florist stays alive despite a fire, dementia and loss 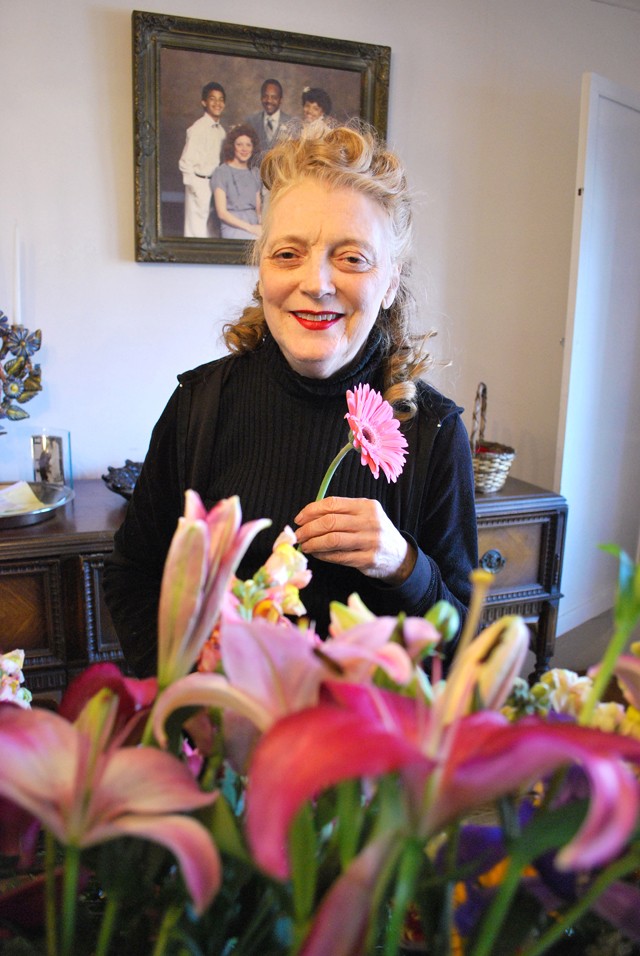 She unwraps the pink lilies and lays them gently on the table. With a knife she trims one stem at a time, and the discarded pieces fall to the floor.

This used to be where she and her family ate together. Now it's where she works.

Patricia Duff and her husband Nat spent a lifetime selling floral arrangements at Byron's Flowers on Woodward in Highland Park. Then, in March last year, their century-old business burned to the ground in the middle of the night.

They didn't even know their building was on fire until it was long over. Patricia would unplug the phone before going to bed because Nat had trouble sleeping. And so they slept through the blaze. They learned of it only when her son's friend knocked on their door in the morning and changed everyone's lives with a few words of news.

Although everything they had in Byron's was lost, Patricia was determined to somehow keep the family business alive. And so her house became a flower shop.

"If we shut down we'd lose our business, and there was no way we were gonna shutdown," says Patricia, 68.

She called the phone company the day after the fire and had the store's phone number transferred to her house in Detroit's Boston-Edison neighborhood. She brought fresh flowers home from the wholesaler, put some in the fridge, put others by the window so they'd open their clenched petals when the sunlight touched them. There were customers waiting on arrangements, standing orders that knew nothing of a fire.

And slowly, she adapted to a new life.

Wholesalers cut her a break, letting her purchase things one by one rather than in bulk like she used to. Instead of buying invoices by the box she prints them one at a time on a home computer. Instead of ordering professional business cards she now gets them for only $1.99 for 500 of them if she leaves the printer's advertisement on the back of her cards. It's less than ideal, but it's better than giving up.

"We're really strapped for cash," she says. "We just try to cut corners as best as we can. It's a lot different, but it's manageable." Her kids Nicole and Damian help her out without taking any pay for it.

Some of her regular customers have found her new location, directed here by a banner the family hung along the iron fence that still circles the site of the fire.

Consultations are held in the living room, the solarium is used for storage, and the flowers get trimmed and arranged in the dining room.

Patricia wants to move back to the old location, into a new building. But the insurance company, she says, is dragging its heels on paying the claim until they finish investigating the fire. Meanwhile, the city is eager to clear the charred rubble still piled on the lot. If that happens before the investigation is done, though, the insurance won't cover it, and Duff gets stuck with a demo bill she can't possibly afford.

So she waits, works from the house, pleads with the city to wait a little longer, and hangs on day by day, trying to fulfill a promise her husband made to the family.

"The whole mindset is, in the black minority community there aren't any businesses that go on to the second generation," she says. "That has always been our goal. It's the continuance that's the most important thing, surviving to the next generation. So I want to keep my husband's dream alive. That's the reason why."

She has to keep that promise by herself now because he can't do it anymore.

Patricia and Nat met in the late '50s. He'd come north from Alabama and was working at a car wash. She worked at the Dairy Queen next door. They were a mixed-race couple in a time when that meant trouble.

"It was very hard," Patricia says. "We were pulled over by the police a lot for being together. We were followed sometimes. There weren't many places in public we could go to."

Nat got his start at Byron's as a delivery driver and quickly worked his way up. "My husband would deliver them but he kept looking at the arrangements," she says. "Sometimes he would take them apart and redo them so he would learn. He taught himself."

The owner grew to love him so much that when he died in 1969, his wife was left with instructions to sell the shop to Nat, his longtime, loyal employee. The Duff family has run it ever since.

Patricia believes her husband's was the first black florist shop in the Midwest, and he was one of the first minority owners to belong to FTD, the industry's largest network. It was a lonely distinction.

"We would go to FTD conventions and he would be one of two black people there," she remembers.

They went through a lot together at the shop. There was the time robbers came in, beat the couple and threw them down the stairs, all for $200. The time when celebrants broke in and stole flowers to commemorate one of the Pistons' championships. The time a drunk drove his car right through the front wall of the shop. The time burglars broke in and rummaged through everything, all while the terrified family listened from the other room, where they had been sleeping after pulling an all-nighter before a busy holiday.

"There were a lot of things that happened at the flower shop, but we stayed," she says. "We're survivors."

Then came the fire.

Her husband doesn't live at home anymore. He'd recently begun to slip into dementia, and by last year Patricia found herself taking care of him fulltime. The 70-year-old man had endured four strokes and open-heart surgery, and developed a host of other health problems that turned out impossible for her to handle alone. Last fall, she had to move him into a nursing home.

She goes to see him every single day, sometimes twice a day. The couple spent so many years at the shop, so much time side by side, that he's still got that life ingrained in his mind, too deep to be diminished by a slipping memory. Patricia sometimes gets calls from the nursing home staff in the middle of the night because Nat's up and about, convinced it's time to go to work at his flower shop. She has to get up, get dressed, get down to the nursing home and console him back to sleep by telling him she already handled the day's orders.

Her days are busier than ever now. Besides the enduring flower business, besides the visits to her husband, she's also an artist, with her own studio in the Scarab Club in Midtown and drawings exhibited in eight shows since the first of the year. And she babysits seven grandkids most days. "So it's a nursery and a flower shop in a house," she laughs.

It's spring again and it shows in her home. Roses jostle with water bottles for breathing space in the fridge, lilies yawn in the sunlight by the window, and the air is suffused with the perfume of all the blooms that have passed through the old house. For another year now the flower shop is being kept alive, a promise is kept to her family, and a vow is kept to her husband.

"It's difficult," she says. "It's real tough. But you know, I'm a firm believer in the old school. You know — you marry, you marry for life, and you take care of each other. It could be me. And I would want him to do the same thing for me."