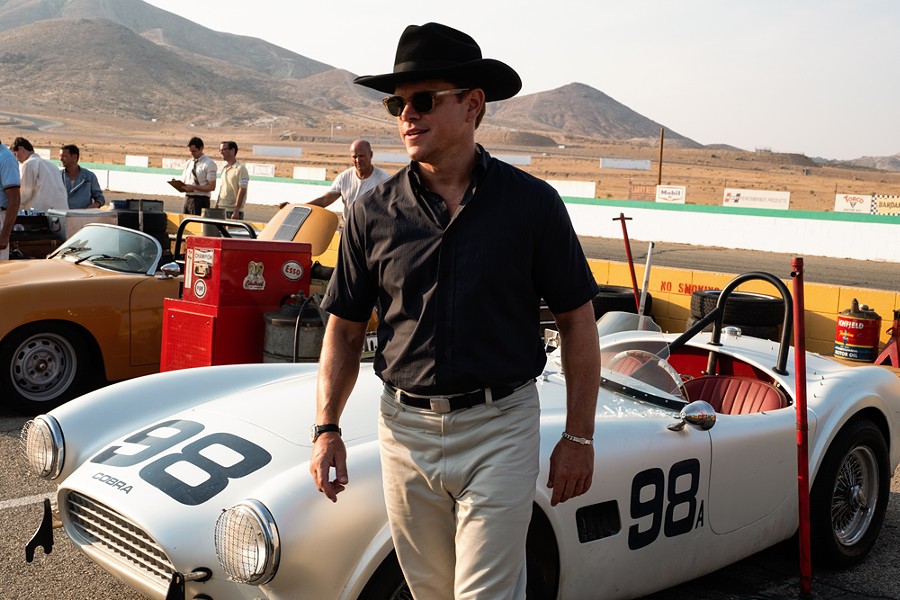 Built with the dependability and comfort of a luxury ride but stocked with enough muscle under the hood to carry it over the line, Ford v Ferrari is a classic bit of Hollywood engineering. James Mangold is a mainstream director but with an indie sensibility that makes him a fixture of the awards season circuit; a filmmaker adept at threading the needle between art and commerce. Mangold's hits like Walk the Line are the kind of moderately sophisticated, grown-up, major studio fare that so many thinkpieces insist are going extinct, though really they just seem to be getting crammed into an increasingly smaller fall and holiday release window. This is the case with this high-octane, old-school crowd-pleaser, which by rights should've been a summer blockbuster, but thanks to a pair of quality performances, has been thrown into a crowded field of would-be Oscar bait. Fortunately, the offscreen political jockeying does nothing to detract from the finished product, which is very polished and effective entertainment, even if it's not quite a revelation.

Set in a romanticized, macho, mid-century realm where men were men and cars were fetishized works of beauty, the film chronicles an epic, much-celebrated international automotive feud. The always compelling Tracy Letts plays Henry Ford II, known somewhat affectionately as "Hank the Deuce," and the executive that steered his grandfather's company from the bumpy postwar era through the golden age of chrome and tail fins. A failed effort to purchase Ferrari in the early '60s enraged Hank 2, who launched a campaign to beat the precision-oriented Italians at their own game: building the ultimate race car.

To tackle this challenge, Ford turns to Carroll Shelby (Matt Damon) the relentless, innovative auto designer behind the iconic AC Cobra and Shelby Mustang models. Before health concerns forced him to retire, the hard-charging Shelby was the only American driver to win at the 24-hour endurance race at Le Mans, the racing crown jewel that everyone desperately craves. The competitive fire still rages in Shelby, and he finds a match for his passion and reckless ambition in hotheaded racer Ken Miles, played with trademark intensity by Christian Bale. The well-matched leads develop an effortless bromance, and their chemistry fuels the whole endeavor.

The thinking at the Blue Oval is that success on the track will translate to sales on the car lot, though the concerns of marketing chief Leo Beebe (Josh Lucas) keep creeping in front of the needs of the mechanics. In a rather generous bit of casting, Jon Bernthal (TV's Punisher) plays a rather chiseled and dreamy-eyed Lee Iacocca, the exec that runs interference between the garage and HQ.

The middle third of the film basically becomes a glorified buddy comedy, with the grease monkeys taking on the starched white-collar stiffs in Dearborn, and butting heads with each other before aligning for the big race at the end. It's in those race scenes, shot with a minimum of CGI, that the film really revs up, providing an exhilarating, technically dazzling climax that also serves the storytelling.

Behind all the screeching tires, grinding gears, and nostalgic patinas is a tale about the emotional lives of men, and more specifically men of an era where having feelings was considered unmanly. At one point, Letts gives a speech about how Ford won World War II from the assembly line, and what amounts to a costly corporate pissing contest is put in the context of a grand European conquest. War service looms large for all these guys, and was the defining ordeal that drove them to test the barriers of civilian life, to recapture the danger and the glory that they once survived — driving at insane, unnecessary speeds, and pushing themselves and their machines to the breaking point gives these men purpose, even if it seems crazy and pointless to others. It is the will to achieve, and the brotherhood of shared goals, that makes the risks worth everything.

Ford v Ferrari is not showing in any theaters in the area.