When media speaks of the redevelopment of Detroit, they typically talk about two people and one neighborhood: Mike Ilitch, Dan Gilbert, and downtown.

But there's a woman who should be part of that conversation who's redeveloping the city, from Palmer Park to East Jefferson: Kathy Makino.

Makino is rehabilitating Detroit with the care, attention, and affection of a nurse bringing a wounded soldier back to full health, and she's creating affordable housing with finesse and respect to detail.

She took a few moments to speak with us last week. This is a portion of that conversation.

Metro Times: You've done a lot with the redevelopment of Detroit.

Kathy Makino: I'm committed to the city. I've always loved Detroit. I grew up in a little suburb, Wayne. I was 23 when I bought my first building in Detroit, in 1983. I've always loved real estate. I've been very lucky. I look back and, my father was disabled when I was 12. He was a manager of a car dealership, and when I look back at him, he didn't have a pension. Dealerships, they don't get the benefits that the UAW had. There was no union. So he had no pension, he had no health insurance, when he couldn't work any longer, at 57, he basically lost everything. He had no car, because when he was manager at the dealership, they let him use a car. I remember being 12 years old and going with him to sell worms on Belleville Lake to make an extra dollar because he was living on $369 a month. I was the youngest of five kids.

I literally started working 40 hours a week for this couple across the street when I was 12, babysitting for them. He happened to have rental real estate, and I really think that's what made me start thinking at a young age. He was the nicest man in the world. He used to have bags of money sitting around his office, and I thought, "Whatever he's doing ..." because here we are struggling across the street. At 16, I started reading the real estate books. At the corner, there was a Century 21 office and I would go through their books of houses for sale. When I was 19, I bought my first duplex.

Makino: I worked full-time all the way through school, and I saved up $2,500. When I saved it up, because my dad had managed a Chrysler dealership, this was when the Chrysler stock dropped way down, I remember taking my $2,500 to a Merrill Lynch office downtown. I said I wanted to buy $2,500 worth of Chrysler stock, and the guy put his arm around me and said, "Sweetie, if I can recommend one thing, please don't do this." Instead, I put $2,500 down on a duplex in Westland on a land contract. So that's where I built my first tax credit program, is Westland (in 1995). I always loved downtown, so that was always my dream, to help rebuild Detroit.

MT: What are you doing here in Detroit to help rebuild?

Makino: I think my main focus is I'm taking vacant, boarded buildings, especially historic buildings, and renovating them and creating affordable housing. Like these buildings in Palmer Park — they are absolutely gorgeous. I personally think they're irreplaceable. The walls are two feet wide, but they were also functionally obsolete. Nobody could have bought the building and rented the apartment and made it economically feasible because the expenses were just incredible. We have boilers that are 50 years old. We have windows that leaked, roofs that were leaking. You needed to have a gut rehab to make them work. We were very fortunate at the time, for Palmer Park, when the president had done the American Recovery and Reinvestment Act. Without those dollars, I don't think we would have been able to do it. The city of Detroit has played a key role, the federal government, the state government. I feel like I'm just the person pulling it all together, but there are really so many key pieces to it. We need to bring in some commercial components. We need to have restaurants and cafes, some coffeehouses, some bookstores, or little places to make it a destination. I want to light up the streets, like in Paris. I'd love to light up the trees, make it a neat little neighborhood.

MT: When did you first purchase in Palmer Park?

Makino: Palmer Park was in 2007. We have bought more buildings since then. My three focal points are Palmer Park, New Center, and then the East Jefferson corridor. It's opposite sides of the city, which is probably not the smartest decision, but I really like fringe communities. Like New Center was always on the fringe of Midtown. I really love doing affordable housing, though, because that to me is — if you get to see the interior, it really is beautiful. Some people do question the extent of the upgrades that we do because we put granite counters and stainless steel appliances, beautiful light fixtures in. We try to do hardwood floors, and that can be much more expensive than just putting down carpet.

I think this stems from my childhood. I lived in Wayne. The area, the poorest section of Westland, was called Norwayne, and my school was in Norwayne. I remember how people used to treat the people who lived in Norwayne, like everyone at school used to assume they were poor, and the kids got treated differently because of that. I always thought that was so unfair, because I was probably poorer than them at that point, but I wasn't treated differently because nobody knew. I used to think it was so unfair for a child to be treated differently because of their financial situation. When I built the first place in Westland, which was in Norwayne, I told the architect I wanted it to be that if you drove past it you'd never know it was affordable. I wanted light brick. I wanted a green, dimensional roof. I wanted beautiful entrance-ways with an arch, nice windows, lighting, and landscaping. I tell [the architect] everything, and I come to the first meeting, and he has this picture on the wall. He was known for being an architect for affordable housing. So he has this picture on the wall and goes, "What do you think?" and it looks like every other affordable housing I'd ever seen and I said, "Oh, that's nice. Whose is it?" He goes, "That's yours." I go, "It's not mine. That's not what I want." He never liked me after that. He changed it, but he never liked me after that.

That's what's so neat about this project now. It's 20 years old and if you drove past it today, you'd think it was one of the nicer places in Westland. It's just beautiful.

These are things that are hopefully going to last a lifetime. You don't make quick judgments and do what's easy and fast. What I'd like to see on the river right now is mixed-use, where you could do a first floor of restaurants. You know, there is nowhere for us to go and have dinner on the river. That, to me, is a shame. We have this beautiful asset that we don't get to use.

MT: What do you think some of the misconceptions are regarding real estate in Detroit?

Makino: I do think Detroit is a place to go, but I do think that there's a group of speculators trying to buy up all those homes and then just sit on them and not do anything. We've had that going on for way too long. That's my whole problem with the East Jefferson corridor. You have several people that own a lot of real estate there that have just sat on it for years, and it's just a shame. That should be the entrance to Detroit from Grosse Pointe and it's one vacant building after another.

MT: I feel like there's a lot going on here in Detroit that's very short-term.

Makino: Absolutely, and unfortunately, I think that's probably true of most areas in the country. I think people in general need to get away from that way of thinking and start thinking about taking our time and making the right decisions that are going to last for our kids and their kids.

MT: As a woman doing this, did you face any unique challenges?

Makino: Originally, I had to get over that hurdle of respect, wondering if you knew what you were doing as a woman, especially in the city. People had a tendency to think that I should be more cautious. I don't give up, and I think people that I work with end up respecting [me] for that. They know I'm not going to give up, even if it's a tough struggle to get something done — If I set out to do it, I'll get it done. I think there're so many people in this city who started things and never finished them. So, in that respect, it makes things easier, but I don't think it has anything to do with being a woman. It's being tenacious.— mt

The Don Was Detroit All-Star Revue, El Club reopens with a bang, and other things to do in Detroit this week 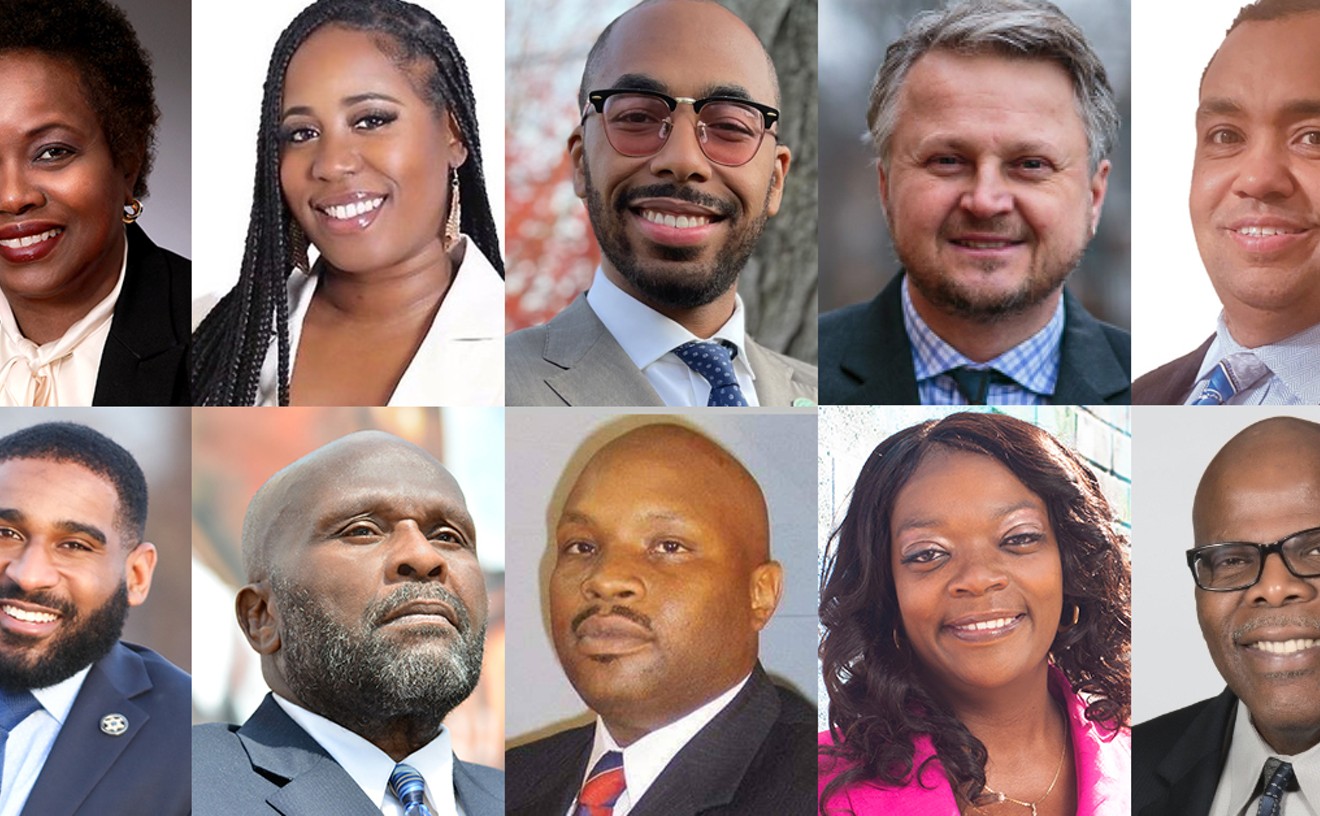