It may be time to get a little Primitiv with your cannabis. Primitiv, the brand from former Detroit Lions Rob Sims and Calvin Johnson, could be coming to a dispensary near you.

The partners have been growing the plant at their facility (with a staff of about 15 people) in Webberville, and selling it into the Michigan distribution system for more than a year, but they weren't pushing the brand so much. Now they've got things up and running the way they want it — harvesting about 100 pounds of flower every six days — and they're ready to let everyone know Primitiv is on the market. They sell product in several dispensaries in Michigan including 3Fifteen in Flint and expect to have their own location up and running in Niles later this year.

Technically speaking, Primitiv is a "cannabis research company dedicated to compassionately serving medical marijuana patients." Sims and Johnson were first treating themselves when they were playing football as an alternative to opioid-based painkillers that were available. Now that they're retired, they have followed the lead of other retired professional athletes and come out of the closet regarding their cannabis use. It seems that there are no cannabis activists among athletes who are still drawing a check in the leagues.

"Obviously you got to pay your bills," says Sims of players choosing to keep their jobs and not disclose their marijuana use while still playing. "There's some guys that are in right now, unfortunately, they need this. They need this alternative. ... It's more than you expect. The truth is you're going to have to use some sort of pain reliever to play professional sports. That's just what it is."

It was their real estate business that helped lead Sims and Johnson to growing cannabis. Cannabis properties were a new product on the market. As they acquired property for that use it occurred to them that they might add cannabis to their own portfolio. More than three years later, they're ready to bust out big. Over the next year they expect to see growth with retail sales, expansion of the Webberville facility and hope to establish the Primitiv brand in other states where marijuana is legal. They've recently signed an agreement with EAZE, a national cannabis delivery company that also markets brands.

Primitiv also has a processing license although it's not online yet. What they hope will make them stand out, in the long run, is products that are unusual. 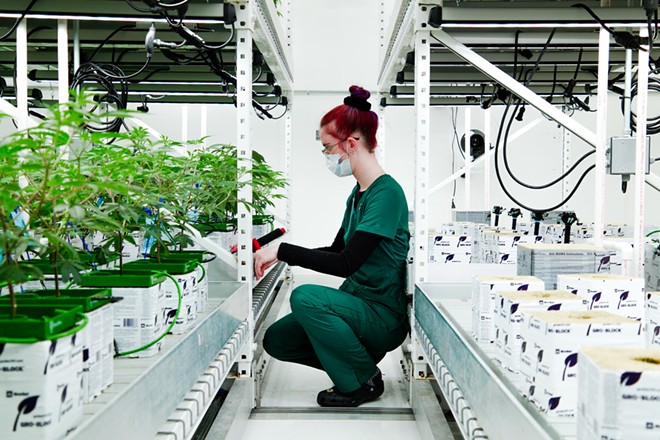 So what is a performance line? "I can't talk too much about that," he says, "but really what we want to do is we want to take the oil from here and we want to start to do some products that can help people not only in just getting high but can actually help in your day-to-day, energy, sleep, things like that. So these are the next things we want to bring to market under the Primitiv line."

Although Sims and Johnson are celebrities, getting Primitiv established has been a long tough fight. A few years back the state office held back allowing them a license due to a Johnson unpaid traffic ticket. Getting by the stigma attached to marijuana hasn't been any easier because of who they are. And this is a brand new industry without a tried and true roadmap to follow. In fact, the road has constantly changed over the few years that marijuana has been legal as long-held beliefs and legal strictures are challenged. Maybe it's the challenges that make these guys keep at it.

"It's one of the best jobs I've ever had," says Sims. "I've never done any other work that is more fulfilling. And we're going to have the ability to really help some people. It's just as hard if not harder (than playing football) but I take a lot less of a beating."