Frances Ma of Detroit band Don’t has anxiety, but not about their debut record, ‘Lightning Slow’ 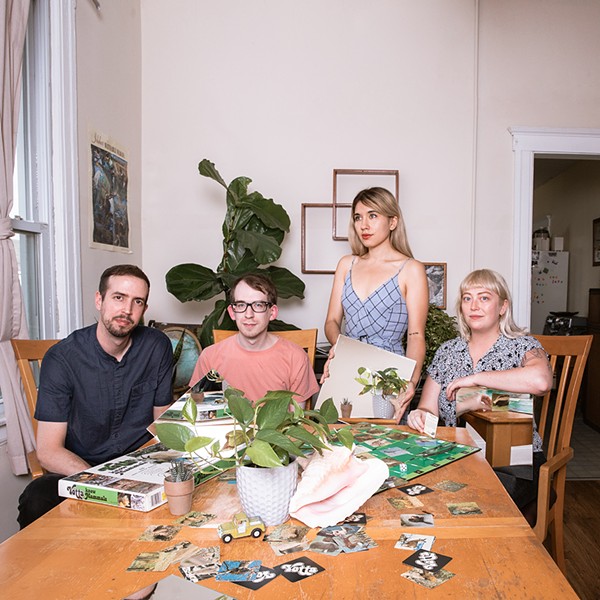 Frances Ma has only ever written one diss track. The song, "Pretty Knife," doesn't target an unfaithful ex or a scorned former bandmate, nor is it aimed at a general group of people with whom Ma ideologically disagrees with. The target is someone she knows better than anyone else: herself.

If that isn't telling of the Don't frontwoman's personality or approach to her own musicianship, then maybe her jokingly discussing her pre-show anxiety ritual of puking three times and taking a nap (she doesn't actually do these things, but admits that her brain does go there) might help paint a picture of how Ma is able to lean on her Don't family, as well as her membership in Ben Collins' indie-rock outfit Minihorse, and even her day job at Pewabic Pottery, where she's part of the nonprofit's marketing team.

"I'm certainly at the whim of the party at all times and I think like that's a good thing because my anxiety, I wish it was gone," she says. "I'm not trying to glamorize it all, but it is a good motivator for me, personally. Something terrible has to happen for me to not show up for a gig. Something terrible has happened for me not to show up for my friends. I'm really all about like you pay your dues, you show up for people, you commit. Even when it, there's nothing in it for you because, at the end of the day, there are some people who have really stuck their neck out for me on so many occasions and every time I think of those people I'm like, I owe it to them to be that person."

Don't, of course, is Detroit's vulnerable lo-fi indie-rock band that calls to mind a sunshine-drenched combination of on-again, off-again New Zealand outfit The Clean and Seattle's La Luz. Ma and longtime music partner Jared Sparkes started the project back in 2016 and were later joined by bassist Jules Fisher and Nick German on drums. If the band's 2016 debut EP, Forget It, feels like a sonic distant cousin to their four-years-in-the-making debut full length, Lightning Slow (due out March 6 on Dreamy Life Records, with a release show at UFO Factory on March 7,) that's because it is. On Lightning Slow, Ma explores familial relationships, including the one she has with herself. The layer-driven, harmony-heavy record, on which Ma exercises her flickering falsetto, grazing the top of her range throughout most of the album, is a stark contrast to the reactionary, one take and done efforts of Forget It, a record written and recorded in response to a breakup.

"We just started finishing each other's songs when we lost the energy to do that. I think for me, personally, I've had a hard time with the stamina. I've had a chronically difficult time sleeping and so has Jared. But I'm always, like, pushing myself and — you know what I mean? But sometimes you just hit a wall, and I think it's been nice to have, like, someone musically to kind of take me to the next level."

That next level was made possible by prolific songwriter and producer Fred Thomas, who mixed and mastered Lightning Slow and recorded the album with Gordon Smith. He also lends guitar on "Yellow Feathers" and "Underwater." Ma praises Thomas for his patience and pushing of artists to trust their instinct, and she appreciates how he often treats music like a document of a time, place, and sensation, noting the times he instructed Don't to practice a song and that it would be recorded, adding they would live with whatever the raw result was.

"He does that sometimes," she says.

Once Lightning Slow was completed, Ma and her bandmates were hoping to find it a home. Thomas, who made sure Illinois-based indie label Polyvinyl was hip to singer songwriter Anna Burch and has worked some magic for other artists in terms of referrals and facilitating demo distribution. Though Thomas sent Don't's work around town, no one took the bait, mostly because Don't was so new and, as Ma jokes, the band didn't have a "thing." Ma didn't have the bandwidth to self-release Lightning Slow, either, but trusted the process and submitted to serendipity. While on tour in Texas with Minihorse, Ma found herself chatting up Cameron Smith of Dreamy Life Records, a shop connected to a performance space, Main at South Side, where Minihorse performed. Smith loved the Minihorse set and was bummed they were already signed to Park the Van Records. Ma pointed out that her project was looking for a home, and Smith asked to hear it.

"And so I sent it to him. I was on the road working in the backseat. I remember popping, like, two Dramamine — it just like, OK, here we go," Ma recalls. "And then within less than 24 hours, he was like, I love this. I'm going to send it to everybody. And now they're putting Lightning Slow out on tape and CD." She still sort of can't believe it, either.

For Ma, Don't is a unique project, unlike anything she's experienced. She admits that her focus in Don't is on vocal performance and continues to be lyric-driven, where as actual instrumentation is more of an instinctual afterthought, something that fleshes itself out in practice and recording. Things are aligning for Don't and for Ma, who, despite her anxiety, is excited for the future because she has access to all of these projects that facilitate different interests. In terms of what the band is working on now, post-Lightning Slow, Ma says they might be some of the strongest songs the band has made to date, suggesting that they "can do better" than Lightning Slow and that there's plenty of room for Ma to push herself further in every direction. While that might sound sort of intense, she doesn't mean for it to. She's proud of the work she and the band have accomplished, and at the end of the day, Ma says, Don't is about having fun.

"I want everyone to feel like they're bringing what they're comfortable bringing to the table because I think so often when I've been in a lot of situations like this, particularly with my very first serious relationship and every musician I've dated since then pretty much, there's just been like, you know, this underlying weird competition," Ma says. "When you're playing music with — especially men, there tends to be this whole thing where it's like, OK, 'Oh, that was good, but do it this way' and 'That was good, but try this.' They want to control every aspect of any given situation. It's definitely not like that with Don't. It's definitely not like that with Minihorse, which is amazing. It took me a long time to find people who I could play music within that capacity," Ma says. "Don't is just a very unique little band where we're not trying to be famous — we're just trying to make music. And you know Don't — it's like a family. It's like a home for us."

Don't will perform as part of their record release with Ben Collins (solo) and Idle Ray (Fred Thomas) and Phased Out at 9 p.m. on Saturday, March 7 at UFO Factory; 2110 Trumbull Ave., Detroit; ufofactory.com. Tickets are $10-$12.