Tall tales from the king of clowns 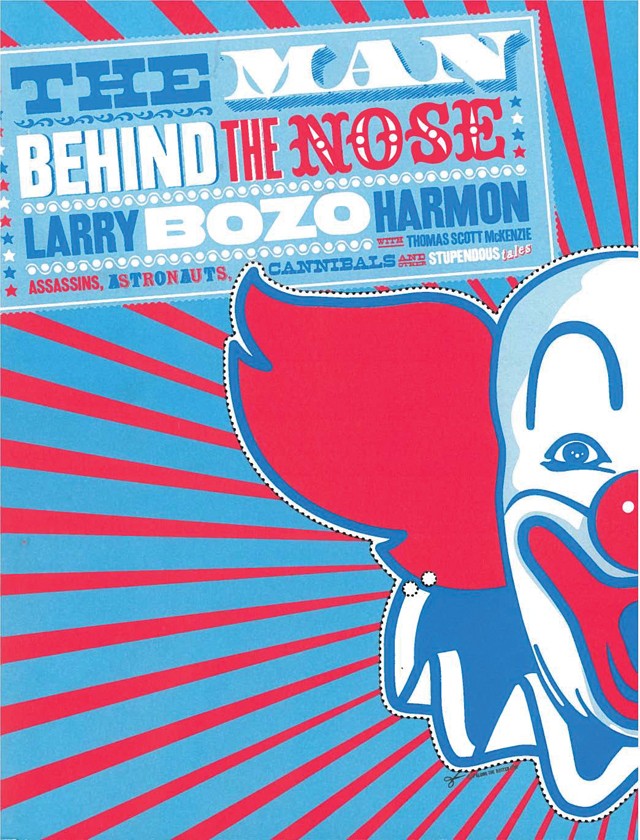 The Man Behind The Nose: Assassins, Astronauts, Cannibals, and Other Stupendous Tales

There's a numbing sameness to only-in-America Horatio Alger stories: With persistence and determination, underdog succeeds in business and life by inventing or cultivating a contraption, process, or ability that catches on with millions of people. It's rare that someone achieves renown by purchasing the rights to an existing character — an over-the-top clown, say — then pumping that character full of experiential steroids and spreading his daffy, indefatigable sense of good will and devil-may-care sense of adventure around the world like smallpox with rabid evangelical fervor. Yet that's exactly what the late Larry Harmon did in 1956, securing licensing rights to Bozo the Capitol Clown on a payment plan.

"I didn't just want to be a clown," he writes in The Man Behind The Nose. "The world was full of clowns and, sure, they made people happy. I enjoyed seeing circus clowns piling out of tiny cars as much as the next guy, but I wanted to cross over, to do something a bit different. I wanted to be an entertainer."

Half of Nose tells the tale of how Harmon eventually and essentially became Bozo, training a small army of foot soldiers (a young Willard Scott among them) in the Bozo arts — all the better to franchise the character into cultural ubiquity — donning the iconic red honker, exaggerated make-up, and schooner-sized spats to educate, inspire and entertain several generations of rapt fans. Of course, he did much more than entertain.

As Bozo, Harmon tells of packing more living into one life than most could pack into a dozen (especially if we can believe it all). With a film crew, he flew into the heart of New Guinea cannibal country — ostensibly to inquire into the whereabouts of Michael Rockefeller but also to test "my own strength, courage, and deep-seated belief that humor, compassion, and caring can bring people together." His instincts did not, ultimately, betray him. During a 1980s presidential run intended to "get young people to vote," so he says, he narrowly ducked several assassination attempts. To help his audience make sense of the inaugural moon landing, he braved multiple zero-gravity parabolas in a military plane: "My challenge, I realized, was to do this without throwing up on camera"

Every page of Nose is laid out like a circus poster, the chapters' opening paragraphs rendered in ornately ostentatious fonts equivalent to a carnival barker's megaphone. The latter half of the book is a spectacle in and of itself, a highlight reel that's more inspirational memoir than straight up autobiography: Harmon's four marriages, his four children, and the legal, conceptual, and emotional difficulties that must have accompanied his vocation are entirely glossed over.

As it happens, Nose is most fascinating in its pre-Bozo, Batman Begins-esque passages, with thrilling, cascading constellations of coincidence: a drum teacher granting young Harmon the opportunity to play Duke Ellington's "Mood Indigo" with Lionel Hampton, Gene Krupa and Buddy Rich; Harmon idolizing Al Jolson as a tot and later having the chance to wow his hero onstage (twice) while serving in the military.

It's exciting to hear the author recall his formative years — as a drummer in Ohio, then as a celebrated high school and college drum major, and finally becoming involved in a whirlwind of industry, ideas and artistry without a clear sense of direction.

Harmon, who died in 2008, "did everything from working as a private investigator to decorating the homes of Hollywood celebrities like Clark Gable to overseeing a wholesale brokerage company" when he wasn't gigging with jazz groups, starring on Commander Comet, or assisting Fred Astaire with a dance-scene rhythm in Royal Wedding. Nose is, finally, a triumph of the can-do spirit, a celebration of the idea that a tireless work ethic, faith, and relentless effort can reap huge dividends — a shot-in-the-arm aspirational jolt for every modern-day renaissance man or woman struggling to make side hustles and conflicting passions add up to something meaningful, perhaps even monumental.