Long MIA, a rock shaman returns to connect the dots 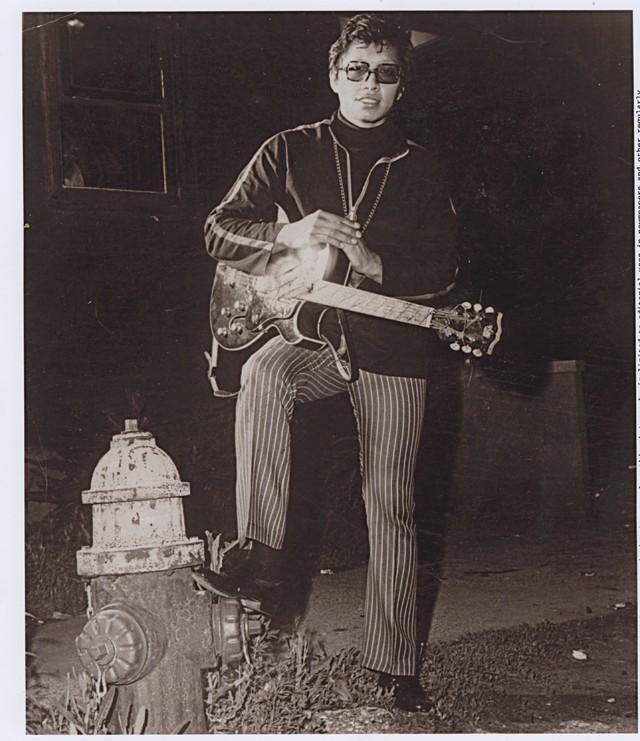 The vast rock 'n' roll graveyard is stacked high with the dusty bones of worthy artists who've been overlooked, exploited, rejected, mistreated, embraced then forgotten — or just outright ripped off. Few of those artists, though, have a story to match that of Sixto Rodriguez, now on screens across the country in the movie Searching for Sugar Man.

We caught up with the perpetually shy and elusive Rodriguez by phone, and he seemed to be finally almost embracing the attention, ticking off a lengthy list of his scheduled media commitments, including a performance (Aug. 14) with David Letterman.

He speaks in a breathy whisper with a lilting quality, often in long rambling chunks of free association. He is the kind of speaker who requires you to lean in, an almost shamanic figure, perhaps ready to emerge at last from the shadows for a long-overdue encore.

Metro Times: What was the music scene like in Detroit in the '60s? Did you start off doing coffeehouses? Were you doing folk?

Sixto Rodriguez: I used the protest song, the protest songs were a genre I thought I could turn to as writer to express what I feel and what I saw. Protest songs: "Ohio" by Crosby, Stills, Nash and Young, "Masters of War" by Bob Dylan, "I am a Rock" by Paul Simon, " Eve of Destruction" by Barry McGuire, oh, and John Lennon; that genre of material was my focus. You know, they all do this thing about, you know, jazz and classical, but to me that's just recitation. It's good to be so proficient with your instrument, but I think vocals and content are important.

MT: So you were more in the sort of Phil Ochs tradition ...

Rodriguez: Well, yeah, he's another one. I question how he passed; I saw him in Detroit as a matter of fact, and he was a really healthy guy. He had two girls on his each arm, you know, and he was political. And what about Walter Reuther and his passing, and all the other things that were happening in the '60s and '70s? So, the students at Kent State that were protesting the war against the governor, and here they are shooting Americans. Conscription, government oppression; burning their draft cards resisting the draft and moving to Canada. My fan base in South Africa, Afrikaans who defended their country in Namibia. ... I have to mention that just recently former President Nelson Mandela just celebrated his birthday. Tonight we're going to the United Nations, and we're going to do a Q&A.

Rodriguez: I got to clarify this: I was born roughly four or five blocks from downtown Detroit, the address is 831 Michigan Ave., right by the Kosciuszko statue.

MT: Where the casino is now?

Rodriguez: Yeah, right there, exactly. Mexicans are indigenous people. They have a lot of history there, the Olmec culture, 1200 B.C. There's a drug war on the borders of America, but they only cover Iraq and Iran and Afghanistan. I asked a journalist down there [Mexico]: " I heard there were 40,000 killed there," and he said, "50,000," and you don't hear boo about it in certain Rupert Murdoch columns. And the scandal in the media over there in England will include Tony Blair, and will eventually include the Bush administration. I have to remind everyone that California produces Arnold Schwarzenegger, produces Ronald Reagan and Richard Nixon. So that kind of is who owns the media.

MT: It's not all "Hollywood liberalism."

Rodriguez: Oh, and my background. I'm Mexican, my parents are both Mexican, but I'm born and raised in Detroit. I graduated from Wayne State University, but there's a whole lot you don't learn in school. I used to love Detroit, and I liked Detroit and now I understand Detroit. I was too disappointed to be disappointed, so basically [when the albums failed] I just went back to work. I never left music, I just left the music scene.

MT: The stuff that you were writing back then was about the city at the time, the country at the time. ...

Rodriguez: And so is everyone else. The Zapruder film, and ordinary citizen and once that reaches your consciousness, how can a person not speak on that? Knowledge in itself is nothing; it's what you do with it. So, I was never lost, I knew exactly where I was.

MT: As such a political person, does it feel gratifying to have a larger platform again to really talk about issues that are important to you?

Rodriguez: Well, if they ever reached the press that would be another thing. All the people that get, uh, attention are. ... It's still a question of the haves and have-nots. And so to slice it so thinly is true, unfortunately.

MT: We look at apartheid as an alien thing, but we didn't realize that we had dogs and water cannons trained on our own people here.

Rodriguez: Exactly. The thing is the mirror is pretty shocking to us. But the transparency of history will prove it all out. For all the reasons, they have to save Social Security to get these young bloods stabilized through education, but it's not just education, it's enlightenment. And the reason World War II is an important lesson, is that it happens in the modern state. Modernity. Everywhere is Ground Zero, everywhere is Step 1.

MT: I know everyone asks you this, but are you feeling the urge to put some of this to lyric and music?

Rodriguez: Well, right now we're doing these screenings. We're booked through October. We're going to do a West Coast tour, and doing appearances where we can. Thank you for the opportunity for the interview, Mr. Hall

Rodriguez: Help me get something out. I know I did "Establishment Blues," and I said "This is not a song it's an outburst" and I'd play it, I never did describe it as a rant — R-A-N-T — but the thing is it's exactly that. Sometimes it sounds like that, but there's a lot out there on the everyday man, on the plight of the little guy.

MT: There is still a need for someone to speak for the voiceless.

Rodriguez: Voiceless ... ah, well everybody can speak. Voice is the first instrument.