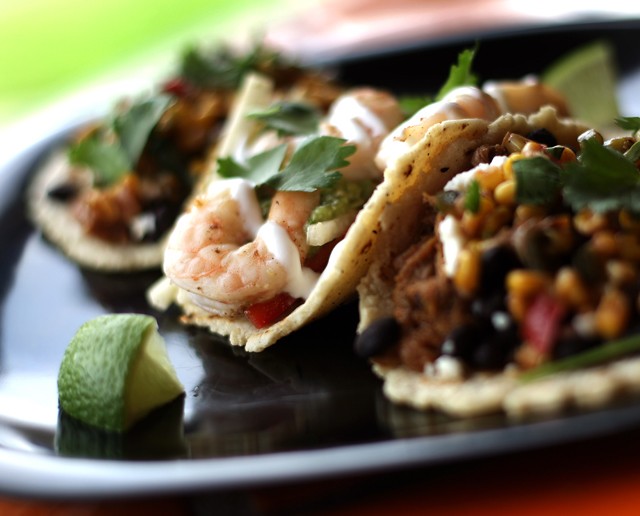 If you'd asked him 10 years ago, restaurateur Steve Zuccaro would have called his culinary efforts a sideline. Back then, his main job was wielding a guitar, playing with such notable Detroit acts as Charm Farm, Uncle Kracker and Gold Cash Gold. His small group of restaurants, which includes Grosse Pointe Park's Lunch Box Deli, downtown Detroit's Green Room and Grosse Pointe Woods' Burrito Mundo, were a sideline until recently. He's been winding down his rock career and turning up the heat in the kitchen instead.

And the Grosse Pointes only stand to benefit from it. His Burrito Mundo, poised to mark five years in business the first week of October, enlivens the Grosse Pointes with quality cuisine in an area that has a surprisingly small clutch of eateries, given its enormous wealth.

"Basically, the east side is just a barren desert for anything creative or unique," Zuccaro says, "other than, like, seven Italian restaurants. It's so far behind everybody else. When a Thai restaurant opened, there were people lined up around the block.

"So that's been something I've tried to do: to bring some cooler things over here. I basically never claimed Burrito Mundo to be an authentic Mexican restaurant. It's Mexican-style, but I don't claim that it's super-authentic. You get good, solid food, we offer interesting choices, and quick service."

And what Burrito Mundo may lack in authenticity it more than makes up for in creativity. It's a modest space with counter service, seating perhaps a dozen, and yet you could dine on its menu of standards and specials for weeks without repeating a dish. In fact, the newcomer may feel a bit befuddled by the array of options on offer.

One option worth trying would be the joint's hand-pounded corn tortillas. These aren't the factory-made tortillas that crumble away while you try to eat; they held together better than flour, but with more flavor.

The build-your-own burrito is a good choice for beginners, allowing diners to attune these baby-head-sized creations to the proper spice level. With the salsas, unless you have a very tender, spice-averse palate, it's best to go adventurous. They range from mild to hot (a helpful scale is offered), including a smoky roasted corn salsa, a surprisingly tangy salsa verde, a smoky and spicy roasted tomatillo chipotle, and the habanero hell strong enough to tickle your ears.

For appetizers, one of our group raved over the Mexicali Cornbread, two cakes of cornbread with pepper shavings cooked in, which come with a dollop of rich jalapeño butter, which a co-diner pronounced excellent, even as it got her nose running.

There are several salads to choose from. We had the Seven Layer Salad, in which chopped romaine is enriched with sliced black olives, beans — kidney and refried — sour cream, guacamole and two cheeses.

We went for the hard-shell option with a few tacos, including the Gringo (classic shredded cheese and lettuce, diced tomato and ground beef), the Santa Fe (shredded cheese, chicken and lettuce, with corn salsa and black beans) and the Asado (shredded cheese, roasted poblano and red bell peppers, onion and marinated steak). We liked the Asado best —the challenges of biting apart hunks of steak from a taco shell notwithstanding — although we were pleasantly surprised by how moist and warm the Santa Fe's chicken was.

We went hog-wild, though, on the inventive specials, of which at least a half-dozen are typically available. It's best to read the ingredients carefully, as one of our party ordered the steak melt burrito on special and found the fresh jalapeños gave it a bit too much heat. The staff will happily tweak a special to order.

We enjoyed the braised pork tacos ($3 each, $8.50 for three), heaped with house-braised pulled pork, smoky roasted corn salsa with black beans, and cilantro on those sturdy hand-pounded corn tortillas, which came with a wedge of lime in a hat-tip to authenticity.

The very best special we tried was the mahi mahi taco. Unlike many disappointing fish tacos that have shredded meat, these sported generous little fillets that flaked apart in the mouth, topped with just enough garlic aoli to make them pop.

It's surprising to find such a complex menu in such a small space. They even offer coconut rice pudding for a sweet finish, should you have room for it. The overall effect of the food is fresh-tasting, with quality ingredients.

If there's a drawback to a meal at Burrito Mundo, it's the small size of the space, with tables so modest that groups larger than three will have a tight time of it. Thankfully, the hospitable staff made it work, even graciously bringing us our dishes in installments to allow for our large order.