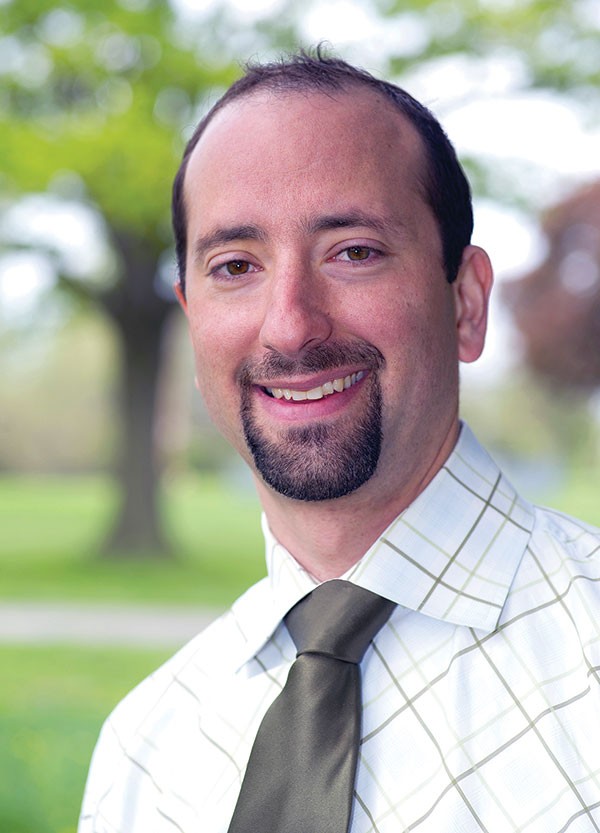 When the newly elected councilman from District No. 7 agreed to sit down with us for an interview, he insisted it take place in his district and suggested the same “little watering hole” where he had celebrated his nail-biting victory over opponent John Bennett earlier in the week.

Along an unkempt stretch of Plymouth Road, just west of the Southfield Freeway, Gabe Leland held court at Starter’s Lounge, where the music was loud and the stench of beer ever-present.

“It’s now famous because of its more grand location in Midtown, but the company got its start in my neck of the woods — off Plymouth and Southfield,” Leland says. “I still find the original spot to be my favorite; surf and turf is on special for $15 some nights! Can’t beat those prices.”

His neck of the woods, of course, is Detroit’s District No. 7, which encompasses some of the most unsavory parts of a city replete with them. From Livernois and Dexter to Parkway and Rouge Park, and bordering I-96 to the north and Tireman to the south, District No. 7 is Detroit’s red-headed stepchild, an oft-neglected section of the city that embodies the issues Leland and his fellow councilmembers will have to grapple with, including economic despair, blight and crime.

While not the youngest member of the new council, which will be seated next January, at age 31, Leland is still a pup, and has the appearance and slender build of a young man still climbing the ladder of his career. Yet, in political terms, he is already a veteran — if not of city politics, then certainly those at the state level.

The scion of a political family, his old man is Burton Leland, a legislator since before Gabe was born. The senior Leland held sway in state government from 1981 until 2006, when term limits forced him out.

The father now resides on Griswold Street, in the pantheon of Wayne County gods as a County Commissioner for District 6.

Pounding the pavement during a campaign that saw districts restored for representation on council for the first time in nearly a century, Leland was able to elbow his way through last August’s primary to face Detroit police officer John Bennett in last week’s general election.

Sardonic whispers of carpetbagging have hounded Leland since his first legislative run in 2004 for Michigan’s 10th district, which overlays Detroit’s 7th quite nicely. He prevailed despite serious opposition and sniping from the media, including this paper, which called his residency into question.

“I have lived in Detroit for over a third of my life, eight years of which have been in District 7,” Leland says. “I love this city; my heart beats for Detroit, and this is where I hang my flagpole.”

Lest you think this mild-mannered good Jewish boy reared in East Lansing is a pushover, the fact that he won re-election three times, and where the campaigns were overtly charged with racial “identity” politics — spearheaded by none other than disgraced former Mayor Kwame Kilpatrick himself — demonstrates both Leland’s grit and his comfort with himself.

“To any Detroiter that’s considering making a run for public office some day, don’t let the residency issue stymie your candidacy,” Leland says. “Detroit voters are smart; it’s less about home address and more about where your heart is, level of experience and how one stands on issues.”

Active at the Isaac Agree Downtown Synagogue, Leland is the first Jewish member of council since Mel Ravitz, who last served from 1982 to 1997. Being involved in the very different worlds of youthful urban reinvestment downtown and the real Detroit of his district, Leland considers himself well-positioned to bridge the two Detroits.

Considering how close his win was — only 50 votes separated him and challenger Scott, out of more than 16,800 cast, and that he was likely bounced on the knees of his family friends Benny Napoleon and Mike Duggan as a toddler — there seems little doubt that Leland has both the connections and wherewithal to get his district’s concerns heard at those often raucous city council meetings. (Hello, “Shrek!”)