Garlic powder, and why it rules 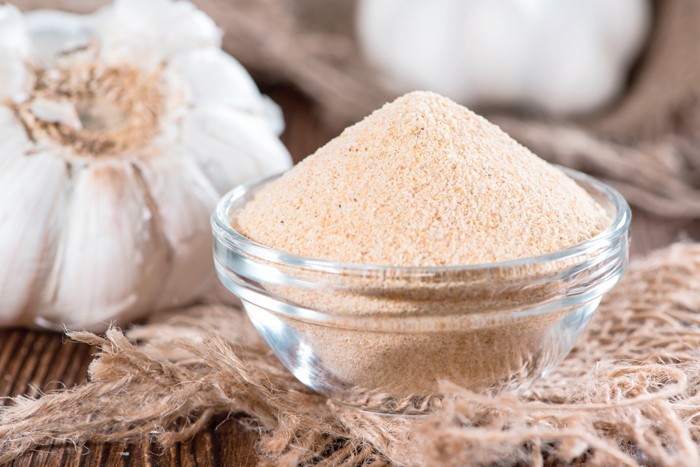 Many foodies look down on garlic powder — and its cousin, granulated garlic — as a stale, cheap substitute for the real thing. It’s a shortcut for lazy cooks, not something the serious chef would consider.

I get the principle behind the sentiment: Fresh is better than preserved, as a rule of thumb. But taken as gospel in every case the dictum can approach sophomoric levels.

“After half a year at culinary school, a culinary school, mind you, where garlic was minced from fresh, cinnamon was ground from sticks, and nutmeg was grated from whole, always, I have been carefully trained to look upon garlic powder with great disdain,” wrote cookbook author S.J. Sebellin-Ross in The Oregonian. “And it makes sense to me. Garlic powder and all its many cousins (garlic salt, garlic paste, pre-peeled garlic cloves) may be great for the busy cook, but they are not nearly the taste treat pure garlic clove is for the eater.”

But garlic is a gustatory chameleon, depending on how it’s used. When fresh garlic is added early and allowed to cook, its bite is replaced by sweetness and mild, permeating pungency. If added at the end of cooking, that same fresh garlic contributes piercing fireworks. I often find myself adding fresh garlic at both the beginning and end of meal prep, and sprinkling powder in the middle.

Chef Rob Connoley, who is putting Silver City, N.M., on the culinary map with his inventive, foraged meals at Curious Kumquat, told me via Facebook chat: “All dried spices are different than their fresh counterparts. They’re typically stronger in flavor and a bit off compared to what we’re used to. So when I use them, sometimes it’s because I don’t have access to the fresh ingredient and I adjust the amount to flavor, but often it’s because I’m looking for a more aggressive flavor in my dish. On my stove right now is the classic Indian dish aloo gobi. I have fresh turmeric in my pantry but I prefer the most biting flavor of dried turmeric in this dish versus many soups that I make, for which I want the mellower fresh version.”

Alas, the case for garlic powder hasn’t been helped by some unkind words Julia Child had to say about it, or the misquoting of Anthony Bourdain by members of the online garlic powder-hating community, as saying “Too lazy to peel fresh? You don’t deserve to eat garlic.”

Sure, he said that in his book Kitchen Confidential. But a sentence earlier he noted: “Avoid at all costs that vile spew you see rotting in oil in screw-top jars.”

I couldn’t agree more with Bourdain with regard to pre-chopped garlic in jars. Though billed as a convenient substitute for fresh garlic, pre-chopped garlic has lost its fresh bite, its clean, piercing flavor replaced by a foul sulfuriness. At best, it pales in comparison to the fresh version.

Curious about what Bourdain’s true feelings on garlic powder might be, I reached out to the esteemed muncher of warthog anus via Twitter, hoping for clarification. Alas, he didn’t get back to me. Some other food luminaries, however, did share with me their feelings on the subject.

Francis Lam, a food writer and food reality show judge, Tweeted back, smartly: “Awful substitute, possibly decent as its own thing.” Food writer, editor and all-around icon Ruth Reichl was open-minded, though not a user. “I don’t really understand why you’d use an acrid industrial product when fresh garlic is so easily obtainable.”

I responded that I grow my own garlic, and make my own garlic powder, to which she replied: “Homemade garlic powder! That’s an entirely different story. Sounds fantastic, actually. Just a dehydrator? I want to try it.”

If you consider garlic powder as its own ingredient and not a substitute, the importance of fresh can be applied to it as well. Fresh garlic powder is a different animal than stale. If you’re not up for making your own from scratch, gourmet spice companies like Penzeys can express deliver, perhaps by drone before too long, garlic powder that will be almost as fresh as homemade. I’ve also seen garlic powder for sale at farmers markets. Crafty growers know that you can make powder out of the leaves at harvest time too. To preserve its youth, large quantities of garlic powder should be stored in a cool, dry place, or even frozen.

Unlike the dominating flavor of fresh garlic, powder is more the glue behind the glitter, adding a subtle fullness of flavor that may be more difficult to detect than with fresh, but nonetheless makes the meal taste better. I consider garlic powder like a (somewhat) less controversial version of MSG. Perhaps you can’t detect it specifically, but in a side-by-side comparison, the otherwise identical dish with added garlic powder will win. I have found little reason not to sprinkle it on practically everything, irrespective of how much fresh I use. If you add garlic powder, simply put, it will be better.

There are also times when garlic powder can be used when fresh garlic would be risky. Some high-heat applications, for example, that would burn fresh garlic. Or as a component of a dry rub or seasoned flour, where fresh garlic would gum up the mixture and won’t spread as evenly as powder. Garlic powder disperses more evenly in brine, and performs better in some savory baked goods. Just don’t add garlic powder at the end of cooking, as it needs time to absorb moisture.

And if you grow your own, converting it to powder is a great way to deal with the bulbs that are getting soft, or sprouting, as they do when it gets cold. Three good-sized heads will make about a third of a cup of garlic powder.

Slice the cloves as thinly as possible and dehydrate them. If your dehydrator has a temperature control, set it to 125 degrees. When totally crispy, with no soft pieces in the mix, let the pieces cool to room temperature. Pulverize them in a clean coffee grinder or spice grinder. Store in a salt-shaker. Sprinkle on food midway through cooking, as MSG was tossed around Chinese restaurant kitchens in the 1970s. That is, on basically everything.