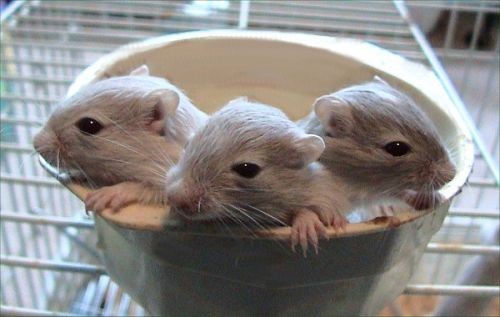 Dear readers:  I’m off this week. To tide all of your hot, kinky or sore asses over, here’s a column I wrote 15 years ago. Some newer readers might’ve missed this column when it originally appeared — some of you who were still in grade school, diapers, or amniotic sacs back in 1998 — so I’m rerunning it now because I still get questions about “gerbiling” on a daily basis. —Dan

We were having a little office debate about “gerbiling.” How does it work? Do all gay men do this? Does Richard Gere? Does the animal get shoved up the anus with a toilet-paper roll only to suffocate seconds later? Is it the scratching or the act of killing an animal that gets people off? Why? Can’t this cause serious damage? What gives? —Curious co-workers

Every day, my mail contains at least three questions about “gerbiling.” In the eight years I’ve been writing this column, I have never addressed the gerbil issue, but now, this week and this week only, I am breaking my silence. Clip and save this column, for I will never discuss gerbils again. Ahem. To begin, I would like to make a controversial statement:

I have never had a gerbil in my ass.

This statement is not controversial for the reasons one would hope: It isn’t controversial in the “Hey! That’s uncalled for!” sense, like, say, a woman at a dinner party announcing that she doesn’t have a hedgehog in her vagina. That would be uncalled for, because no one would suspect her of concealing a hedgehog. But being a gay man or Richard Gere in America means always having to reassure people that you don’t have a gerbil in your ass — at dinner parties, during family reunions, at funerals, on CNN, at passport control, wherever! For while gay men and, I assume, Richard Gere don’t put gerbils in their asses, not a day goes by that someone — usually a straight 13-year-old boy — doesn’t try to shove one in, figuratively speaking.

Hundreds of thousands of men and women in this country, my fellow Americans, leave high school convinced that gay men put gerbils in their asses on a semiregular basis. Unlike our hypothetical dinner-party guest — the vaginal hedgehog stuffer — my denial of stuffing gerbils is necessitated by the accusation. If it were widely believed that women stuffed hedgehogs into their vaginas, then women would have to deny “hedgehogging.”

Some background: Gerbil-stuffing is a sexual practice that straight teenage boys in general, and Howard Stern in particular, suspect gay men in general, and Richard Gere (who is not gay) in particular, of engaging in. It works like this: Hold a gerbil in your left hand. Using pliers with your right hand, rip off the gerbil’s lower jaw. With the blunt side of the pliers, knock out the teeth in its upper jaw. Pull all four of its legs off. Leave the tail. Set aside. Take a cardboard paper-towel roll, grease it up, and insert it into your rectum. Tie a string to the gerbil’s tail. Nudge the gerbil into the outside end of the paper-towel roll. If for no other reason than to get away from the person who knocked its teeth out, the gerbil leglessly scampers up the wet paper towel roll.

1) The type of straight person who believes that gay men engage in “gerbiling” is likely to believe other gay stereotypes: We’re all prissy little swishes, for instance, with clean apartments and extensive collections of original Broadway cast recordings. Yet the same person who believes gay men are prim sissies also believes we’re capable of holding a struggling rodent in one hand while ripping its lower jaw off with the other, and then tearing its legs off (think of the mess!) and stuffing it up our butts — hardly a prim pastime. This is known as cognitive dissonance: the holding of mutually exclusive beliefs.

3) Inserting a wet cardboard paper-towel roll into your ass is simply not possible, as anyone who’s ever put anything in their ass can tell you.

Now I feel I can write with some authority that no one has ever actually stuffed a gerbil up their butt, perhaps with more authority than I can write that God and angels do not exist. I’ve had conversations with hundreds of outrageously kinky people, gay and straight, who’ve told me the craziest shit: I once chatted for an hour with a guy who married his horse. (He was deeply offended when I asked if his horse was a he horse or a she horse. “I am not a homosexual,” the hetero horse-fucker informed me.) Both in my professional and personal life, thousands of guys have freely admitted to doing the most out-there, dangerous, risky, stupid, kinky stuff. But not once in all these years has anyone ever told me that he, or anyone he knows, or anyone anyone he knows knows, has ever put a gerbil in his ass. Like the doomed gerbils themselves, this story has no legs. It is an urban legend.

But you don’t have to take my word for it: I have proof. If gay men and Richard Gere stuffed gerbils in their butts, well, then the pet stores that serve the gay and Richard Gere communities would stock gerbils, right? I mean, everything else that a perverse gay man needs is available in your average gay neighborhood, from poppers to butt plugs to bullwhips to sofa sectionals. So if we stuff gerbils up our butts, then pet stores in, say, California must do a bang-up gerbil business.

But guess what? In San Francisco’s Castro neighborhood, gay ground zero, the pet store Petpourri, “where professionals answer your every question,” sells only pet supplies — no gerbils —and they don’t stock cardboard paper-towel tubes or pliers, either. Animal Farm in West Hollywood, also a very gay place, sells only dogs and cats (which wouldn’t fit up anyone’s butt, not even Richard Gere’s). And guess what I learned while looking into this? Not only do pet stores in California not sell gerbils, but it’s actually illegal for them to do so.

According to Marshall Meyers, an attorney at the Pet Industry Joint Advisory Council in Washington, D.C.: “California law prohibits the sale of gerbils because of desert conditions in that state. Gerbils were once a desert mammal, and the state was concerned that gerbils could escape and establish themselves in the wild. It is a form of animal control.” It’s not because gay men stick them in their asses? “No, it’s strictly an ecosystem issue.”