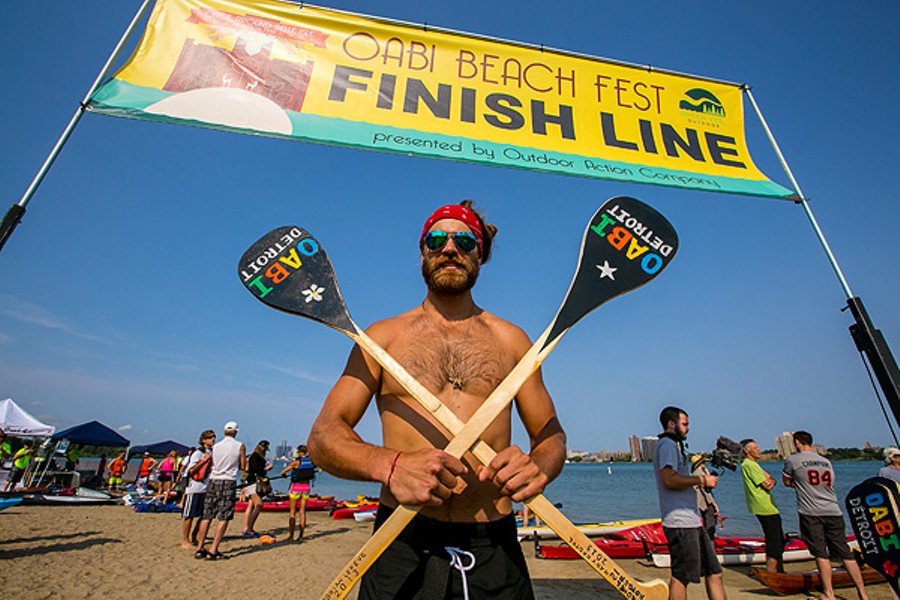 Whether you think Tyree Guyton's neighborhood-sized project is a work of art or an eyesore (feel free to duke it out online in the comments section), the Heidelberg Project is undeniably one of the city's most famous tourist destinations. In fact, we've never paid a visit without encountering any less than three international tourists at any given time, often filling their digital camera memory cards with snap after snap of Guyton's post-apocalyptic assemblages of stuffed animals, car hoods painted with grinning faces, polka dots, and (probably) the kitchen sink. While the firebugs who have been systematically torching Guyton's installations still remain at large, Guyton has seized the opportunity to create new installations from the wreckage.

One of the most delightful sights to absorb in metro Detroit, Hines Park has been a go-to spot for family gatherings, bike riding, joggers — you name it. The 15-mile trail that wends from Northville to Dearborn provides an idyllic scene for cyclists hoping to enjoy a set of rolling hills that, for a novice rider, can be a difficult task. But anyone who wants to enjoy the outdoors with a pal in a place that affords you more than enough space to stretch out and relax, couldn't do wrong with Hines. Newburgh Lake is a lovely go-to point and offers the opportunity to canoe all day, if you so please. Cyclists could ride forever at the I-275 Metro Trail, which connects on the west end of the parkway.

Sure, it's only 1-mile long and stretches between the Detroit riverfront and the southend of Eastern Market, but the Dequindre Cut is a bona fide gem of the city, and there are plans to expand farther north in the works. Planners say soon enough the trek will expand to 1.5 miles, and head through Eastern Market before bumping into Midtown. If you happen to be going downtown for one of the many concerts at the Riverfront outside the RenCen this summer, it's worth getting down earlier to enjoy a stroll through the Cut. It's also a great locale for people watching, if that's your thing.

It's summertime, and your pooch wants to be outdoors. Luckily, a proliferation of dog parks have appeared in recent years across metro Detroit. Given there's a bevy of options to select from now, it's safe to say you'll find a park that's to your liking. For example, if you're protective of your best friend's well-being, the Hines Park playpen in Livonia requires a health check before dogs are allowed. If you're looking for a wide-open area to ensure your dog gets a nice chance to run wild, Detroit's Corktown neighborhood has an excellent spot off 17th Street at Michigan Avenue. Whatever the case, get out and enjoy the summer — with your dog.

Sure, you have to pay $11 for a state park pass to get on to the island, but Belle Isle's quaint nature center is free to enjoy once you're there. The center hosts toads, snakes, turtles, spiders, and fish, but the most famous inhabitants are probably the fallow deer. The herbivores have been living on the island since the late 1800s, when the king of France sent them as a gift. The 13 deer that now live at the nature center are relatives of the original herd. You can feed them by hand Wednesday through Sunday at 11 a.m., 1 p.m., and 3 p.m.

Want to dip your toes in the sand, but can't make it out to the beach on your lunch hour? Consider hitting the sandbox, er, beach at Campus Martius. There are colorful lawn chairs, blue and orange umbrellas, and copious tables that are all free for public use. You can pack a brown bag, but there's also a bar and grill that serves fancy tacos and chips and salsa as well as beer, wine, cocktails, and soft drinks. The beach is open from 11 a.m. to 10 p.m. Monday through Thursday, from 11 a.m. to midnight on Friday, 11 a.m. to 11 p.m. on Saturday and 1 to 8 p.m. on Sunday.

There is no more debaucherous a display of flagrant binge drinking, overt sexuality, and dangerously unsafe boating practices than that of Jobbie Nooner. The biannual aquatic affair held on Lake St. Clair attracts upward of 60,000 people and thousands of boats. This year the Jobbie Crew is promising something called the "Wheel of Destiny" as well as an upgraded sound system, plus the requisite bikini-clad women willing to show their boobs and bottoms for tantamount more than a string of beads or a can of beer. The first Jobbie Nooner will be held June 26, the second on September 12.

For approximately two and a half months out of the year Michigan weather is so beautiful that you don't want to sit inside a cold, dark theater for two hours in order to enjoy the latest summer blockbuster. Of course, the beauty of a drive-in theater is that you get to revel in a warm summer evening while soaking up brainless entertainment. It's a win-win, really. Every night, the theater plays first-run films in a double feature format, which, admittedly can be awkward. Once we saw Captain America: The Winter Soldier followed by Muppets Most Wanted. On the whole, however, this historic theater is a metro Detroit treasure.

Above, we talked about the aquatic phenomenon that is stand-up paddleboarding. The sport requires nothing more than a board, a paddle, and a person and can be enjoyed just about anywhere there's a body of water. OABI, an event in its fourth year, implores Detroiters to get on their SUPs and get into the Detroit River. Of course, kayaks, canoes, surf skis, crew sculls and shells are also welcome. The event's name is short for "Once Around Belle Isle," and includes a race as well as the Moosejaw-sponsored Paddlerama. The race is for more experienced paddlers, while Paddlerama welcomes newbs.

Experience the Motor City in a another way when you rent a bike from Wheelhouse Detroit. You can cruise the Riverwalk on your own or choose from one of their many guided tours, with titles like "Murals of Southwest Detroit," "Underground Railroad," and "Music Heritage." Tours range from $30 to $50 and have a variety of distances for bikers of all skill levels.

$40 - Kayaking on the Detroit River

Looking for a way to cool down? Detroit River Sports offers guided kayak tours down the Detroit River and its eastside canals, with views of sites like the Historic Fisher Mansion, Klenk Island, and more that can't be beat by anything on land. Customers can take the two- to three-hour canal tour during the day or at night, for $40. For the same price, you can skip the canals and head into Blue Heron Lagoon, instead, for a look at Belle Isle you won't get anywhere else. Want to do your own thing? No problem. DRS also offers kayak rentals for $15 per hour or $50 for the day, so whether you want a guided tour or just a relaxing day on Detroit's beautiful waterways, DRS has you covered.

Many have fallen in love with the Petoskey area for its beaches and quaint shops, and also learning about Ernest Hemingway. The 20th century American author visited his family's northwestern Michigan cottage nearly every summer until he was 21, and set many of his short stories in the area. Historical markers are spread out throughout the region, but most sites are right in the heart of Petoskey. Grab a meal at Jesperson's Restaurant, a favorite spot of Hemingway's that inspired the story The Killers and parts of the novel Torrents of Spring. Stroll alongside Horton Creek, where Hemingway used to fish for trout, or see his family's home at the edge of Horton's bay. Non-Hemingway enthusiasts can still enjoy browsing the historic Gaslight Shopping District, biking along the Little Traverse Wheelway, or trying their luck at the Odawa Casino.

On Sunday afternoons in the summer, a string of lots on Frederick Street gets taken over by live blues shows that can draw hundreds of guests, who dance, picnic, and soak up music and sunshine. It's called John's Carpet House, and we profiled its lead organizer Albert "Big Pete" Barrow in our issue last week. That's partly because the city government has been trying to give the outdoor venue the blues, shutting down three of the shows this year. But it's back up and running, and everybody who loves the blues and leaves their bad habits at home is welcome. The stage hosts nationally known acts, and draws audiences from all over Detroit, even the occasional busload of visitors from Europe. It's all run by donation, so be sure to give generously if you go: Barrow is the guy who pays the bills and taxes on the property, and donations are always welcome to defray the considerable cost of putting on this one-of-a-kind show.

From 3 to 9:30 p.m. Sundays, on the north side of Frederick Street between St. Aubin and Dubois streets, Detroit; for schedules or to make a donation, see johnscarpethouse.com.