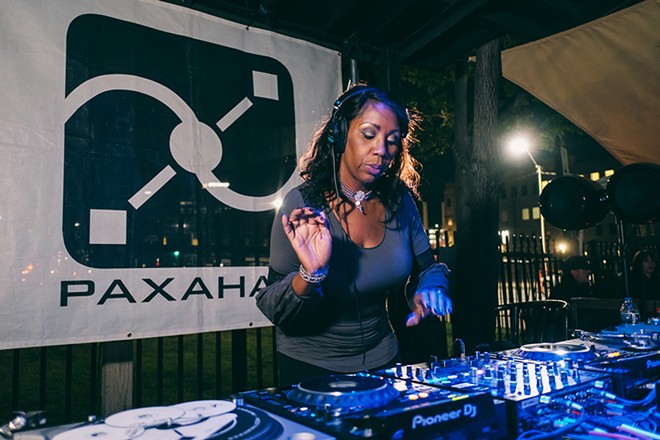 Though the annual Movement electronic music festival isn't able to take place for the second year in a row due to the ongoing COVID-19 pandemic, festival organizer Paxahau has created a new way to celebrate: Micro Movement, a smaller, limited-capacity festival, with nearly 50 Detroit artists across all genres of electronic music and hip-hop playing at select local venues over Memorial Day Weekend.

The festival is sponsored by Select Cannabis. "We understand that many Michiganders, myself included, are looking forward to seeing the stages come back to life after a challenging year," says the company's marketing manager, Lissa Satori. "So many artists, promoters, and venues that have been in limbo through the pandemic are eager to get back to entertaining." Paxahau urges fans to be patient for this unprecedented event. "As the producers of Movement Festival, we had to do something for Memorial Day Weekend but we didn't know exactly what our options were until about a month ago," Paxahau president Jason Huvaere says. "We're asking those who plan to attend in person to please be compliant and understanding with the venue staff as they manage the weekend and maintain their entry policy should they reach capacity."

The venues are TV Lounge (2548 Grand River Ave., Detroit; 313-965-4789), the Magic Stick's Alley Deck (4140 Woodward Ave., Detroit; 313-833-9700; majesticdetroit.com), and Spot Lite (2905 Beaufait St., Detroit; spotlitedetroit.com), a new venue by fine-art print house and art gallery 1xRun. Below are some of the artists performing, listed in alphabetical order by venue. Set times are to be announced; follow Paxahau for more information.

• Delano Smith: One of the OGs of Detroit house music. For decades, Smith has held down clubs across the world (and of course, in Detroit) as a master of the decks.

• LadyMonix: Deep and groovy, LadyMonix brings forth a sound that's both dance-worthy and chill. As a Baltimore native, the producer and DJ is now based in Detroit and collaborates with artists across the country.

• Adam Westing: Starting as a rock and metal guitarist, this Detroit-based DJ has been performing on stage since the age of 12. His eclectic style combines house and techno influences with his rock roots.

• Andrea Ghita: Andrea Ghita pulls from a variety of influences when it comes to her performances. She combines a mix of techno, house, electro, and ghetto for a custom blend.

• Gettoblaster: Made up of Zach Bletz and Paul Anthony, this house and techno duo combines Chicago's house music scene with Detroit's techno revolution.

• The AM: The AM, or Ann-Marie Teasley, got her start as a classical violinist. Her sound is a blend of the hard techno that earmarked Detroit's rave days in the '90s and a softer combination of soulful vocals and edits.

• DJ Head: DJ Head is a three-time Grammy Award-winning hip-hop producer. He's produced songs for everyone from Eminem to Jay-Z, including Xzibit and Obie Trice.

• Donna Gardner: Donna Gardner has long been an advocate for Detroit dance music history. As a member of the board of directors of the Detroit Sound Conservancy, which aims to preserve the city's musical heritage, Gardner has a true passion for music that translates into her style.

• Eastside Jon: As a mainstay of Slow Jams Detroit, which puts on weekly dance music showcases, Eastside Jon combines funk with classic grooves. Expect to hear a lot of rare cuts dropped throughout his sets.

• ERNO: Expect to hear a ton of disco bangers in Erno's set, who pulls sounds from different generations of dance music both local and international.

• DJ Holographic: As a one-woman machine, this funk master is known to drop everything from house to techno in her genre-spanning sets.

• Secrets: As the alias of Detroit artist Matt Abbott, Secrets is known for his ability to dig out obscure hits from his vast record collection. His style is equal parts quirky and funky, blending a mix of techno and house with disco and boogie.

• Terrence Parker: As one of the pillars of soulful house music, Terrence Parker (aka TP) has been making people dance for decades and has fans around the world. He combines techno, gospel, soul, disco, jazz, and downtempo to create his unique sound.

• Waajeed: From his role as a member of hip-hop and R&B group the Platinum Pied Pipers to his collaborations with J Dilla, Waajeed has had a storied career. He blends a mix of musical genres to form his unique signature sound.

• DEEPFAKE: This anonymous Detroit duo adds a little mystery to their sets, using anti-facial-recognition masks to remain in the shadows while they drop hard-hitting techno beats.

• Henry Brooks: As one of Detroit's next generation of techno artists, Henry Brooks is taking the influences of the past and blending them with his own flair, with a melodic, dark, driving, and hypnotic sound.

• Mona Black: Equal parts techno and house and a big fan of Prince, Black brings forth funky, dance-heavy mixes that have steadily become a staple on Detroit dance floors.

• G.Next & Big Strick: Influenced by Motown acts like the Temptations, Marvin Gaye, and the Four Tops, G.Next and Big Strick put a soulful twist on everything they do.

• Hotwaxx Hale: Known as the "Godmother of House Music," Stacey (Hotwaxx) Hale has been ingrained in the city's house music scene since the '80s. She plays and creates dance music bangers, teaching her DJing and production skills to others, as well.

• Michael Fotias: As the production manager of Paxahau, Fotias is deeply steeped in the city's techno scene, and his work as a master of sound shines through in his live performances.

• Vincent Patricola: A veteran of the Detroit dance music scene, this DJ and producer is a little bit soul, a little bit funk, and a little bit house. He's also the publisher of Detroit Electronic Quarterly, dedicated to the city's dance music culture.

• Carl Craig and Stacey Pullen: These Detroit techno icons, who both helped build the city's dance music culture, consistently pack nightclubs around the world with their performances.

• Craig Gonzalez: Craig Gonzalez has had a passion for vinyl since a young age. Now he brings that passion to his sets, which include a mix of underground techno blends.

• Kyle Hall: Hall has been hailed by Detroit dance music powerhouses Omar-S and Theo Parrish as one of the city's most promising young talents. He plays a deep house style and is also the founder of record label Wild Oats Music.

• TYLR_: Originally hailing from Toledo, Tyler Yglesias ( aka Tylr_) has spent the last eight years making a name for himself in the Motor City. His sets feel both classic and new, pulling from the sounds that built Detroit electronic music and blending them with modern-day influences.

• ADMN: The Detroit DJ and record label owner keeps the sound of late-night warehouse parties alive. His style is influenced by the roots of Detroit techno, which you can hear in each performance.

• Dan Bain: This genre-defying DJ is known for mixing house, techno, indie, trip-hop, and anything else from his crates of vinyl.

• Pierre Lacroix: Better known as one half of the Midnite Jackers, Lacroix has been DJing for more than 20 years, playing a slick blend of all things house.

• Remote Viewing Party: A project by Detroit artists and producers Aran Daniels and Mike Petrack, who play a combination of Detroit techno and house music. As a staple of the city's dance music scene, this duo can often be found playing at storied techno club TV Lounge.

• Jakob Harris: This up-and-coming indie artist drops mixes influenced by rap and hip-hop. His sound is a perfect fit for fans of bass and beats.

• Jesse Cory: Jesse Cory has built a name for himself in the art world as one of the founders of Detroit art publisher and gallery 1XRUN. That work also translates into the music scene, where Cory plays house music that he's been collecting since the mid-'90s.

• Malik Alston: A musician through and through, Malik Alston is simultaneously a composer, musician, performer, and engineer. Pulling from early influences of jazz, R&B, classical, and, of course, dance music, Alston combines these genres to create a soulful, groovy sound.

• Norm Talley: As one of the building blocks of Detroit deep house, Norm Talley has influenced the city's dance music culture for nearly four decades. Influenced by the early dance music scenes of disco and progressive, Talley has created a whopping 400-plus mix CDs to date.

• Al Ester b2b Bruce Bailey: Both Detroit house namestays, Al Ester and Bruce Bailey have soulful, groovy tastes in music that perfectly complement one another in a back-to-back set.

• Chuck Daniels: Chuck Daniels is known for bringing out the classics. With a mix of house and techno, Daniels often pays homage to the individuals who built Detroit electronic music.

• Matthew Dear: Matthew Dear is renowned worldwide for his avant-pop approach to electronic music. With early roots as a co-founder of dance label Ghostly International, Dear is known for his experimental twist on the sounds that built Detroit techno.

• Chris Worthy: This producer, DJ, and record label owner started making music at the age of 11. Since then, he's perfected his art to put out a Detroit-centric sound.

• Dru Ruiz: Born and raised in Detroit, Ruiz is a gifted turntablist and the mastermind behind the Old Miami's Sunday party series.

• Drummer B: This self-made producer, DJ, art collector, and musician airs his musical chops in live performances. He's collaborated with everyone from techno mavens Juan Atkins and Derrick May to Detroit rapper Danny Brown.

• Grant Jackson: As a DJ and promoter, Jackson is the force behind a number of Detroit events, including Taco Tuesdays, Soup Sessions, and After Hours Brunch at the Alley Deck.

• Dez Andrés: As a former DJ in hip-hop group Slum Village, Andrés combines a little hip-hop with a little electronic.

• LadyMonix: Deep and groovy, LadyMonix brings forth a sound that's both dance-worthy and chill. As a Baltimore native, the producer and DJ is now based in Detroit and collaborates with artists across the country.

• Rick Wilhite: Often known as the "godson of Detroit house," Rick Wilhite pays homage to that title with some seriously funky sets. Pulling from R&B, techno, house, disco, and even reggae, Wilhite is a master DJ who's hailed for his style around the world.

• Sheefy McFly: As a rapper, producer, DJ, designer, and visual artist, McFly taps into his strong creative background to put out a bass-heavy sound.

Lee DeVito and Sean Taormina contributed to this report.