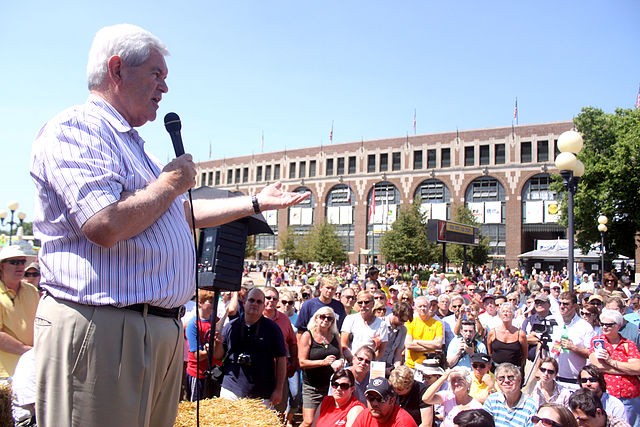 Newt Gingrich is flying high in the polls for the Republican presidential nomination. So what does the erstwhile speaker of the House have to say about marijuana?

As Gingrich seems to have an opinion about everything, it's not hard to find his pontifications on pot. Just a few weeks ago, he said that medical marijuana is a "joke" and that government should pursue the War on Drugs more aggressively. He also supports the death penalty for "high level" dealers.

He must have been wearing a massive pair of flip-flops when he said that. In 1981, when he was a wet-behind-the-ears congressman from Georgia, Gingrich had the audacity to introduce legislation to legalize medical marijuana. Well, what a long strange trip it's been for him since. Apparently there was a day when he smoked the herb, but things changed, probably because no one else who was getting high wanted to hang out with him. As he said in 1996: "See, when I smoked pot it was illegal but not immoral. Now it is illegal and immoral. The law didn't change, but the morality did."

I'm not quite sure what that means or how it happened. Perhaps it means that it was OK for white hippies to smoke pot but not for black hip-hoppers. That's pretty much the way police enforce the law.

Gingrich explains his flip-flop on marijuana as the outcome of listening to parents who don't "want their children to get a signal from the government that it was acceptable behavior." Ah, he did it for the kids.

Now that the candidates have been so outspoken on the drug war, I think it should be a topic on the debate circuit. Ron Paul has come out against prohibition, and Gary Johnson wants to legalize marijuana. Even suspended candidate Herman Cain said it should be left up to the states (maybe it helped him with the ladies). It's not the biggest issue on the docket, but with medical marijuana exploding across the country and a fair number of state initiatives on marijuana projected for next year, candidates will be pressed to give it at least cursory attention.

Maybe that attention will be more than cursory. Recently two governors, Democrat Christine Gregoire of Washington and independent Lincoln Chafee of Rhode Island, petitioned the Drug Enforcement Agency to reclassify marijuana so it can be distributed like other medicines. Actually I hear that Big Pharma has a bunch of cannabis-based medications coming down the pike. So this may not be that far-fetched.

The governors cite 700 peer-reviewed studies and reports on medical marijuana, and call for public hearings so that science can weigh in on the subject. (The Oakland Press writer who reported a couple of months ago that there have been no peer-reviewed studies on the subject should peer into the petition for a few clues.) Gregoire and Chafee decided to do this in reaction to federal prosecutors who sent threatening letters to officials in states where medical marijuana is legal.

Americans for Safe Access is asking people to urge their governor to sign onto the rescheduling petition.  You can find a link for this at safeaccessnow.org. Hmm, I wonder if nerd Michigan Gov. Rick Snyder ... naw, his good friend Attorney General Bill Schuette would advise against it.

Speaking of Big Bad Bill (we won't be referring to him as Sweet William anytime soon), he's managed to chase Big Daddy's Hydro completely out of Macomb and Oakland counties. The business' location on Gratiot in Chesterfield Township shut down after Macomb County Circuit Court Judge John Foster ruled that it couldn't run its marijuana distribution operations there although it could still sell grow equipment. Big Daddy's shut down all operations there, but will continue at their locations on Mack Avenue in Detroit (across from Grosse Pointe Park) and in the city of Burton in Genesee County. Big Daddy's was sued by the township for being a public nuisance. It's a telling twist that Macomb County Prosecutor Eric Smith declined to join the suit while Schuette did.

"I'd like to think the rest of the state will take notice of what's happened in Macomb and Oakland and see that this is likely to happen across the state if we continue to let the attorney general exceed his office," says Big Daddy's spokesman Rick Thompson. "He should not be suggesting changes to the law. He should be enforcing the law as written. He should not be coaching law enforcement on how to punish patients. And in this climate he shouldn't discourage small business from helping Michigan economically."

About those kids that everyone seems to use as their excuse for all kinds of crap: One of the arguments against medical marijuana is that young people will take it as a signal that it's OK to use it and the number of young users will balloon and fly them away to Neverland. That's what federal drug czar Gil Kerlikowske has been telling folks. He says medical marijuana confuses the issue so that "it shouldn't be a great surprise to us that young people are now misperceiving the dangers or the risks around marijuana."

Not so says a report delivered at the American Public Health Association Annual Meeting and Exposition last month. Dr. Esther Choo of Rhode Island Hospital led the study looking at the rates of usage among teenagers in Rhode Island, where medical marijuana was legalized in 2006, and in Massachusetts, where it isn't legal. Researchers found that there was no significant difference between rates of teenage usage in the two states. Apparently neither the message nor "increased access" in Rhode Island caused teenagers to flock to marijuana any more than whatever they are hearing in Massachusetts.

While we're tapping science, here's another tidbit from the world of math and white coats. One of the ailments most sneered at by those who think medical marijuana is a joke is chronic pain. The National Centers for Health Statistics notes that more than 76 million Americans suffer from chronic pain. That's more than the number of people who have diabetes, heart disease and cancer combined. According to a paper published in the December issue of Clinical Pharmacology & Therapeutics, researchers at the University of California San Francisco found that cannabinoids (active ingredients in marijuana) administered with opiates (morphine and oxycodone) reduced pain more than opiates alone. This could lead to therapies in which doctors administer less of the highly addictive opiates.

"Pain is a big problem in America, and chronic pain is a reason many people utilize the health care system," said the paper's lead author, Donald Abrams, MD, professor of clinical medicine at UCSF. "And chronic pain is, unfortunately, one of the problems we're least capable of managing effectively."

It was a small study and researchers have called for ... more research. However, it would be nice if those who sneer at folks treating their chronic pain with marijuana would just shut up and get behind more research too.