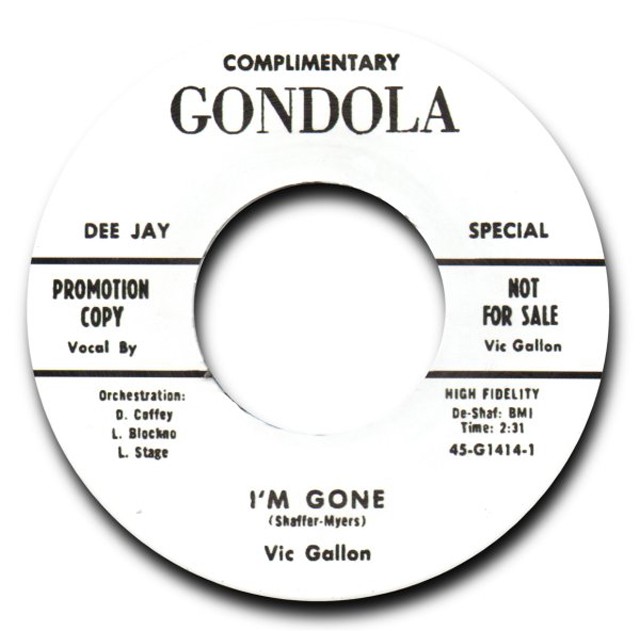 Among mid-20th century America's massive vinyl landscape, there are many who had one shot in front of a microphone only to disappear forever. The only sign of their aural existence a two-and-a-half-minute opus of timeless musical frenzy. But few ever waxed a disc as aptly titled as the one by Vic Gallon: "I'm Gone."

With a set of lyrics whose rockabilly poetry ranks right alongside Gene Vincent and Eddie Cochran, "I'm Gone" is so absolutely 1956.

Dennis Coffey was a 15-year-old kid when he laid down the blistering guitar leads on "I'm Gone" and its flip side, "I Keep Lovin' You." He met Gallon only once, at his first — and probably only — recording session. It was Coffey's first session as well, but his previous experience with both R&B and hillbilly music had primed him well for the futuristic firestorm he was about to unleash.

"I had a doo-wop group first, a Midnighters type thing with just me playing guitar and four black guys singing," Coffey says. "When I heard 'Maybellene,' I thought, 'What the hell is that?' We had to pay our dues by learning off the records — there was nobody who could teach you this stuff. Roy Orbison when he was on Sun, James Burton, these guys were inventing it." And with the waxing of "I'm Gone," so was Coffey.

"Vic was about 22 and played acoustic guitar," Coffey says. He's not even sure how Gallon found him.

"At that point in time all I was really doing was playing with my band at the basketball games during the breaks. Other than that I don't have a clue how he could've seen me."

Coffey got the backing band. "A friend of mine, Larry Blockno, who I played with in my high school band, played drums. Since neither of us were old enough to drive we got a bass player, Lee Stage, who was about 23 — he had a girlfriend who always carried a .25 automatic pistol in her purse! Lee tuned his guitar down to where it sounded like a bass. The studio was on the northwest side of Detroit. I can't remember the name of the engineer, but he was disabled. Vic just played us the songs and we made up parts and cut the two sides. Three or four weeks later he called and said they were gonna play the record on WEXL and interview him. I listened to it and what a thrill; I'm hearing myself on the radio!"

Issued on Gallon's own Gondola label, "I'm Gone," with its jungle drum intro and primitive two-guitar attack, is drenched in so much out-of-control echo that it becomes an instrument unto itself, like Coffey's fuzz and wah-wah effects would later in his career. And, like so many other records Coffey's associated with, Gallon's single has become a hallmark of its genre, recently reissued on 45 for all to enjoy.