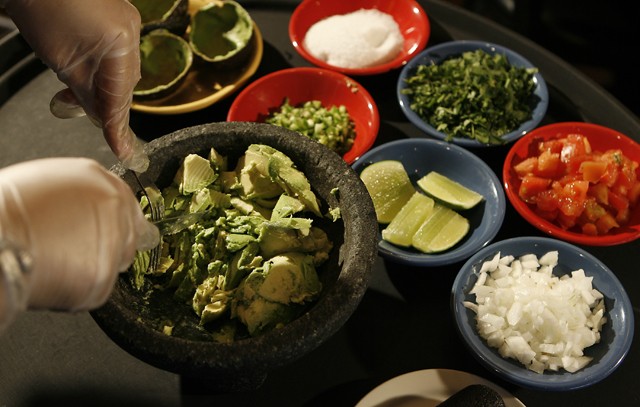 The excesses of suburban strip mall restaurant franchises have succeeded in lowering dining expectations. One or two gloomy meals ordered from a glossy and colorful multipage menu is enough to sway anyone with functioning taste buds from taking a chance at suburban dining. So it's cause for some celebration when a place transcends this status quo, and there is no reason an independent eatery such as Miguel's Cantina should be viewed with a suspicious eye.

From its shopping plaza location just south of downtown Rochester directly off the crowded thoroughfare of Rochester Road, Miguel's can easily be missed or even assumed to be another ordinary Tex-Mex joint serving up meat and flour tortillas under a mass of melted yellow cheese and tomato sauce for gringos who don't know any better. But Miguel's proves that they mean to provide a quality experience right from the start.

As with most Mexican restaurants, complimentary chips and salsa begin the meal. Miguel's takes this a step further by preparing a roasted tomato salsa tableside. Ingredients are crushed and ground in a molcajete, a traditional Mexican mortar and pestle, and offered at mild, medium and spicy heat levels. Ingredients can be omitted if you're one of those unfortunate souls that can't abide the flavor of cilantro. Both times our salsa was slightly undersalted. Not a significant problem, but there will be instances where diners may not make that connection and call it bland. The corn chips are fresh and warm.

Guacamole is also available as an appetizer prepared tableside or simply brought on a plate with chips. It's good though pricey at $10 for the tableside version. The few salads are all Mexican-styled and include some form of crunchy tortilla and protein. Creamier-than-usual tortilla soup, loaded with avocado, cheese and tortilla strips, is satisfying.

Entrées range from several traditional tamales to tacos "Americanos" for the less adventurous. Order the Plato de Miguel to sample a variety. Standouts include carnitas: These chunks of roast pork are ideally prepared, succulent on the inside with bits of crisp and chewy caramelized exterior. The cheese-stuffed, battered and fried Poblano chile relleno is almost as good, the chile still having some structure left to hold it all together. Miguel's also does a nice version of enchiladas de mole. This traditional sauce bears all the hallmark flavors of chile, fruit, nuts and chocolate that bring this dish into the realm of comfort food.

Authentic Mexican tacos made with soft corn tortillas, onions and cilantro are just as good as, sometimes even better than, the tacos you can buy in Mexicantown, only with Rochester Hills prices. We ate them with the tangy pork al pastor but there are numerous varieties of meat you can fill them with. The refried beans and Mexican rice that accompany most meals aren't just plate filler. In fact, the rice is more flavorful than most in town.

If you have room for dessert, fried ice cream is a popular choice. Vanilla ice cream is coated with corn flakes and set in a cinnamon and sugar-dusted fried flour tortilla bowl over a chocolate drizzle. You may want to share it with two or three others.

The atmosphere is a mash-up of sports bar and casual family restaurant. The walls are painted a calm, earthy yellow with brick accents throughout. A bleached steer skull hangs above the varnished wood bar. Suspended from the ceiling are various festive ornaments — pi�atas, colorful paper cutouts, a beer bottle chandelier. Flat-screen televisions are visible from every seat.

All of the standard Mexican beer brands are available in the bottle, while both Dos Equis XX lager and amber are on tap. For our money, Bohemia is by far the most complex and satisfying Mexican beer that's readily available in this country. There are also several domestic "light" beers if you like a variety of characterless drinks.

The specialty cocktail list is brief. Miguel's boasts that the house margarita is made with only fresh lime juice and agave syrup. While it's righteous to take this step beyond sour mix, the margarita is thrown off balance on the sweet side. The "Dirty Jalape�o," ostensibly the house margarita with a bit of pickled jalapeno brine added, regains some balance with a touch of heat.

There are also several varieties of tequila, from an inexpensive $7 blanco to a very well aged $20 sipping drink. Noticeably absent is the dreadful partial agave distillate, Jose Cuervo Especial (Gold). With a popularity fueled more by advertising than quality, its omission from the drinks menu is as much an indicator of the philosophy behind Miguel's as anything that's actually on the menu. Happy hour specials go 3-6 p.m. Monday to Friday, and 9 p.m.-close Monday to Saturday.

On a recent Friday evening they were doing a steady business feeding families and pouring drinks for the post-work crowd. Energetic ambience, friendly service and quality fare are exactly what chain restaurants pretend to offer — while Miguel's Cantina delivers.