Band is more than "just haircuts and jackets." 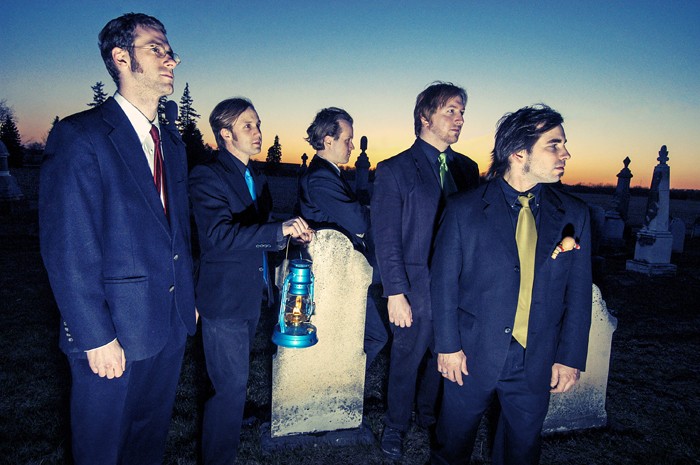 Ten years ago, the Great Lakes Myth Society were already looking back at “the bands that you loved” and exposing them as “just haircuts and jackets.” Those are lyrics from the Ann Arbor-born quintet’s song “Heydays,” and few local releases would ever outdo its succinct poignancy in capturing the capricious (or fickle) cultural climate of Detroit’s post-garage music scene.

Brothers James and Timothy Monger, with Gregory Dean McIntosh, J. Scott McClintock and Fido Kennington, were a band apart back in 2004. Surrounded by the garage-rock scene, they wore suits, sang throaty ballads to jaunty melodies, and blended Celtic folk, British rock and old-timey chanties to stirring compositions radiant with the rich bristling of baroque instrumentation. Definitely no traceable Stooges influences here, which bucked the local trend. But just because they wore ties didn’t mean they couldn’t make a room get rowdy. They found excited and dedicated fan bases blooming all around the state after consistent tours and two full-length albums. And it didn’t take long for the scene to appreciate their emphasis on aesthetics, regional material and a classy mystique.

With sparse appearances these past few years, they always talked about morphing into a strictly studio project. That’s about to get going again. This weekend marks their 10-year anniversary, and they’re celebrating it with a stupendous bill of bands.

Metro Times: You guys came out of the gate sounding synchronized and matured, with a clear sound and vision — that’s because there was another band before GLMS….

Timothy Monger: Right, in 2003, we’d already been playing as the Original Brothers & Sisters of Love for five years, desperately trying to wrap up two years of recording. Our sixth member, a violinist and singer named Liz Auchinvole, was having her first child and her husband was relocating. It was September when we finally delivered our finished album, and two weeks later the label we were on folded. We regrouped and carried on as a quintet with a new, shorter name.

MT: That name has a certain romanticism or intrigue about it; what made aesthetics so important to you?

Gregory McIntosh: Aesthetics are important to rock ‘n’ roll in general. When people are willing to spend their time and hard-earned cash to hang out with us, it goes a long way to change the atmosphere of a room for the night to dress nicely and have the audience feel we’ve put in the effort. Also, it’s fun!

MT: Your most active years were ‘04 to late ’08 — how did GLMS distinguish itself amid that scene of bands and evolve from your first years together?

Monger: We basically rebranded what we’d already been developing since ’97 and it worked. But during the garage boom, Detroit felt completely shut off to us. Accordions, violins and odd maritime and British folk-rock influence? No one wanted to hear that. Suddenly we started wearing suits under a different name and doors opened. That seemed fickle, but as a fan, I can recognize how small aesthetic adjustments change your perception of a group. We started strongly connecting with other bands like Johnny Headband, Javelins and Starling Electric, and we felt like there was a community forming. We signed with Quack! Media out of Ann Arbor in ’06, toured more, played festivals and released our second album, Compass Rose Bouquet.

MT: ... Which features that great song “Heydays.” Looking back now, does that feel like a peak moment?

Monger: It was definitely our most successful era, but we never sold many albums. In hindsight we probably weren’t aggressive enough. We realized somewhere that we had attracted this really crazy, wonderful, die-hard group of fans who knew all the words to our songs and made half-filled rooms in the U.P. feel totally electric. Many of the bands I love had small, cultish careers, and part of me was secretly pleased we’d seemed to go that route. We didn’t fear greater success, but we thrived in this intense, concentrated, statewide scene. We had a direct relationship with our fans; we’re very fortunate for that.

MT: Was it tricky or ever fractious managing a band filled with individual songwriters?

Monger: Jamie and I started playing together in ‘95 and we both wrote songs. Greg joined a couple years later and he also wrote, but I guess it just seemed natural. Many bands I love have multiple songwriters, Queen, XTC, the Pogues, the Clash, all bands with a big, colorful sound. It can be tricky, and some of those bands had stormy careers. But having more than one voice inspires each writer and takes the pressure off. A song becomes the band’s once everyone puts their stamp on it.

MT: What’s your take on Ann Arbor’s music scene, now vs. then?

McIntosh: None of us live there anymore so I can’t be sure. It’s expensive to live there, simultaneously trying to maintain an expensive hobby. Ypsilanti, though, there’s a lot of activity going on there.

MT: What led to your hiatus, and how have you filled the time from 2010 onward?

Monger: (Bassist Scott) McClintock relocated to the D.C. area in ‘09. It was work-related and had nothing to do with the state of the band at that time. We had hopes of trying to make a go of it, long-distance, and Scott was always willing to drive back to Michigan, but momentum seemed to collectively fade. We instead focused on just occasional writing and recording. GLMS was always a presence for us. I recorded and released my second solo album in ’11 and Greg’s really active …

McIntosh: I have a new project called Loose Teeth that’s been incredibly rewarding. It’s my first successful attempt at leading a band through my compositions. I still play regularly with Matt Jones & the Reconstruction and Drunken Barn Dance, while working with Jim Roll at Backseat Productions in Ann Arbor.

Monger: And, aside from future GLMS recordings, I’m going to record my third solo album and am starting another more rock-based band. Scott joined two bands in D.C. and Fido’s always active with bands in the Flint area. We’re all keeping busy.

MT: “Future GLMS recordings,” eh? Well. Finally, how are you commemorating 10 years of playing music together?