What happens when a stoner and a visual genius team up to make a blockbuster? Exactly. 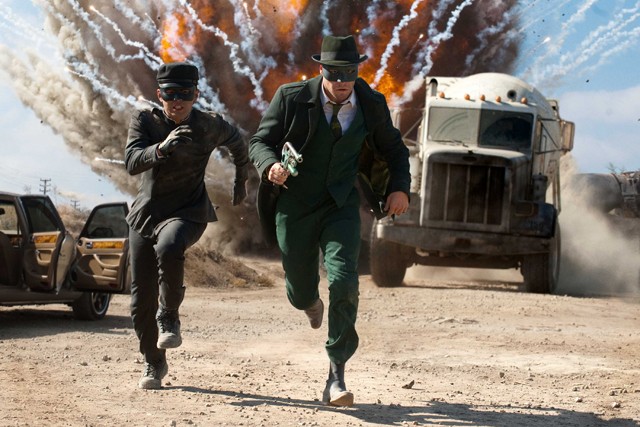 The Green Hornet is rowdy, discordant, subversive and thoroughly modern, exactly what you'd expect when a stoner and a visual genius team up to make a blockbuster movie.

Kicking around Hollywood for decades, the property has had more names attached to it than a kindergarten bulletin board, with the likes of George Clooney, Stephen Chow, Ben Affleck Jason Scott Lee, Jay Chou and Kevin Smith all briefly flirting. There must've been something to Smith's wiseass approach, because the winning bid went to his lumpy pal Seth Rogen, perhaps the last guy in showbiz you'd expect to play a comic book hero, though if Michael Cera can do it, anything's possible.

Rogen has obvious affection for high concept '80s action comedies, and probably reveres Ghostbusters as a sacred relic. The result is a hybrid of butt-stomping thrills and goofball antics, with a thin overlay of trickery and whimsy from inventive filmmaker Michel Gondry (Eternal Sunshine of the Spotless Mind) a talent who tends to float if not tethered to something substantial. At times the picture gets away from him, in fits of tone-breaking violence, but, on the whole, can be read as a silly spoof, albeit a rollicking one.

This outlandish treatment won't rankle Hornet purists because it's not clear that they exist. While there are fetishists for every genre character imaginable, the Green Hornet has always inspired like not love, a respectable but second-rate hero. His generic backstory is full of masked-man tropes: A reckless wealthy playboy, crusading journalist, an avenging son trying to live up to his father's legacy.

Rogen's take on Britt Reid fits comfortably into his man-child wheelhouse, an utterly spoiled, irresponsible, skirt-chasing lout. The party crashes hard when his no-nonsense dad (the great Tom Wilkinson) croaks, and leaves Britt with the keys to his media empire and (here's where the sc-fi starts) profitable newspaper, The Daily Sentinel. Forced to kick a girl out of his bed before noon, Britt is dismayed to find that his cappuccino tastes bad, and sets out to find the culprit, who turns out to be his dad's ace mechanic Kato (Jay Chou), a "human Swiss Army knife," a Kung Fu master, and inventor of cool gadgets, like a knockout gas gun and a heavily armored Chrysler Imperial.

These new BFF's hit the street to start some mayhem, but accidentally break up a mugging, and discover that crime fighting is, like, a total blast.

Green Hornet has never had eye-popping villains, mostly battling bland racketeers, a situation that's barely remedied here with a vile crime baron Chudnofsky, who no one fears because his look and act are stale. His counter is to slap on red leather, drastically overact and demand that people call him "Bloodnofsky," which is even lamer than it sounds. Christoph Waltz (Inglourious Basterds) stepped in late — reportedly for Nicolas Cage — and can't quite raise his crazy level to match. Also miscast as the female foil is Cameron Diaz, who flops around like a trout in a flatbed, never sure of her role, though it's hard to blame her because it's unclear what the filmmakers intended to do with the drab character either. She's there to remind us that Britt and Kato's bromance is platonic, as both dudes make asses of themselves wooing her. This slacker hero is in way over his head, but the biggest threat to the Green Hornet is the thoroughly unnecessary 3-D conversion, which does nothing to aid the movie's chaotic, bullet-choked finale. Gondry's little arty flourishes are at odds with the action flick's need for speed. Green Hornet doesn't always deliver but at least it's never dull.