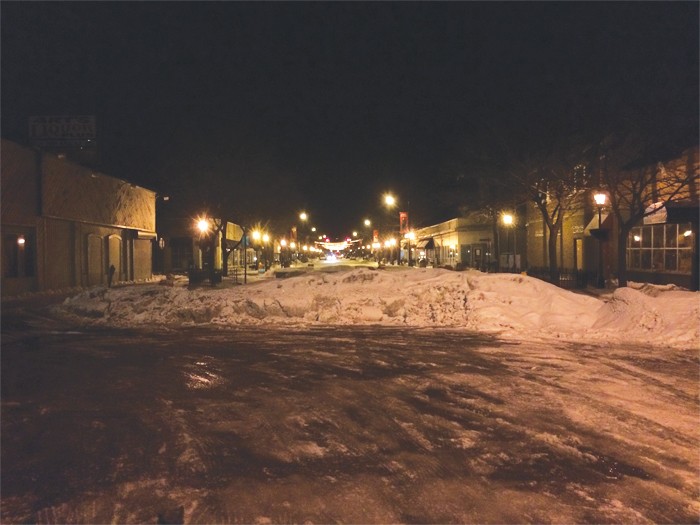 President Barack Obama flew to East Lansing Friday to deliver his spiel on the importance of the farm bill, a law spearheaded by Michigan’s U.S. Senator Debbie Stabenow year-after-year.

But we here at the Hits have a hard enough time finding reason to leave our bed some days, so when the prez swung by to sign the bipartisan bill, we stood by until local news outlets broadcasted his remarks.

The farm bill, he told the crowd at Michigan State University, is intended to “make sure America’s children don’t go hungry.”

Obama says food stamps kept 5 million people out of poverty in 2012. But one thing we didn’t hear? How the bill he signed Friday concedes cuts to the Supplemental Nutrition Assistance Program by $800 million a year, a program that aids one of every seven Americans, the Associated Press reports.

It’s unclear how much the cuts, about $8 billion over 10 years, will affect Michigan residents. But, as of Friday morning, it seemed to us that few news outlets were interested in the impact of the scaled-back Supplemental Nutrition Assistance Program. There was a considerable amount of attention, though, given to Obama’s planned lunch with Detroit Mayor Mike Duggan before signing the bill.

Kareemah El-Amin, executive director of the Food Bank Council of Michigan, tells MLive that a decrease in benefits will likely increase demand at food banks, forcing limited resources to be spread among more people.

The bill Obama signed offers a softer blow than the leaders in the U.S. House wanted — $39 billion in cuts to the program over 10 years. But the version Obama signed at Michigan State University — after eating with Duggan (!) — will likely affect 1.7 million people across 15 states, with an average $90 per month in benefits being lost, The New York Times reports.

Perhaps it would’ve been best for Obama to save the dog-and-pony show and sign the bill in a private setting. At the very least, know this bill will have an effect on hundreds of thousands of households across the country who rely on the SNAP program.

Republican Gov. Rick Snyder drew the ire of numerous Democrats and education groups last month when he said K-12 spending is up $660 per student since he took office.

The bunch at the Hits were also taken aback by the guv’s confidence in his assessment, especially considering dozens of districts across the state are reeling from budget deficits, in part due to a $400 trim in the state’s per-pupil foundation grant.

But, Snyder says, his administration has poured resources into paying down teachers’ pension funds, a move that, he says, still assists the classrooms.

“If someone showed up to help pay your mortgage, doesn’t that give you more dollars to pay your other bills?” Snyder asked the Associated Press. “So that’s the point — it really does help the classroom by helping pay a bill that they’re otherwise going to have to pay and reducing that bill.”

But the state had a role in the teachers’ pension fund gap too, says Jason Gillespie of the Ferndale Education Association.

“As the Republicans have lifted the cap on charters, this exacerbates the unfunded retirement liabilities the state is facing, although Democrats are guilty of embracing the charter movement too, just not to the same extent,” he tells the Hits by email. “The reason this is a problem is because charter school teachers are not part of the public school retirement program [Michigan Public School Employees Retirement System]. This further depletes the pool of working people contributing to the state pension plan. Add to that the retirement of the baby boomers and the declining population in the state and you have a recipe for disaster.”

Gillespie, who serves as the bargaining chairperson of the Ferndale Education Association, has been deep in talks with Ferndale Public Schools’ administration recently, as the district faces a $2 million budget shortfall. Teachers in the district are facing possible mid-year layoffs, he says.

The Freep and MLive determined overall spending on education is up since Snyder took office, but, as Gillespie put it, if our lawmakers could dig a little deeper, maybe they would determine the source of the unfunded liabilities issue. The governor’s proposed budget for the upcoming fiscal year restores about $100 of the per-pupil foundation, but some critics say it doesn’t go far enough.

Real estate blog Curbed Detroit caught some guff last year for a headline on a story about a developer’s plans to construct an entertainment district in Grosse Pointe Park that would effectively cut off access on Kercheval to and from Detroit.

The theme of that headline, “Cut the Road: Grosse Pointe Park Retail Doesn’t Want Detroit,” was reprised last week when a photo surfaced of a snow pile dumped across Kercheval.

The way we at the Hits understand things, it’s not exactly kosher to set up a blockade of snow along a main corridor in town. But the Grosse Pointe Park public works department told us it’s how they run the shop.

“We push (the snow) to the end of the road,” a rep from the department says, adding, “We end up removing it afterwards.”

Asked how long it takes to be removed, the official told us about “an hour and a half.”

Now, we’ll gladly take the Park at their word. But we can assume most areas don’t allow a pile of snow to sit untouched for an hour. In December, Oakland County’s road commission had this to say about the practice, after receiving a few complaints: “This creates a safety problem for motorists and creates additional work for the Road Commission, which, in some cases, has to re-plow the road.”

A safety problem? You don’t say. We can rest easy, though, as Grosse Pointe Park will remove the snow ... when they get around to it.

The Michigan Department of Transportation and various Detroit agencies have scheduled the first of three public meetings on I-375’s future. Possible plans include transforming the mile-long freeway into a boulevard. The meeting will be held from 5:30-7:30 p.m. at Stroh River Place South Atrium, 300 River Place Drive, Detroit.

Residents raised concerns about the possible return of petroleum coke to the Detroit River’s shoreline this week. Detroit Bulk Storage, the company that owned the land where the coal-black material was stored last year, planned to seek a height variance from the Detroit Zoning Board of Appeals Tuesday that, some say, would allow Detroit Bulk to store the material again. The Hits went to press before the meeting took place, but we’ll keep you apprised on the issue.