There's a new development in the works by the same people behind the popular Detroit Shipping Co., the Midtown food hall and entertainment venue built from repurposed shipping containers that opened in 2018.

Dubbed "Complex 444," the $6 million, 21,000 square-foot mixed-use space will be located just east of the food hall at 444 Peterboro St., with ground expected to break in December.

Detroit Rising Development owner Jonathon Hartzell describes the new project as a "sister project" to the Detroit Shipping Co., but he says it won't actually be built from shipping containers — though its design is influenced by them.

Structures built from repurposed shipping containers have become a trend in recent years. Beyond Detroit Shipping Co., there have been other shipping container projects in the city, such as a bar in Campus Martius and condos in Woodbridge and Corktown, among others.

But Hartzell says they decided to move away from shipping containers during the design phase of Complex 444, which will have three floors with retail and office space.

"We just found that the size of the project doesn't make sense to do containers again," he says.

The concept will be anchored by 16 "micro-retail spaces," inspired by the concept of the shipping container restaurants in Detroit Shipping Co. The containers worked for Detroit Shipping Co., Hartzell says, because they are used for the restaurants only, while the public stays in the central open area. Hartzell says by eschewing using actual shipping containers, they can give the retail tenants a bit more space.

Plus, he says they also found there would be a lot of wasted material by using shipping containers.

"Construction-wise, it just didn't make sense," he says. To carry the theme, the building's facade will utilize shipping container material. 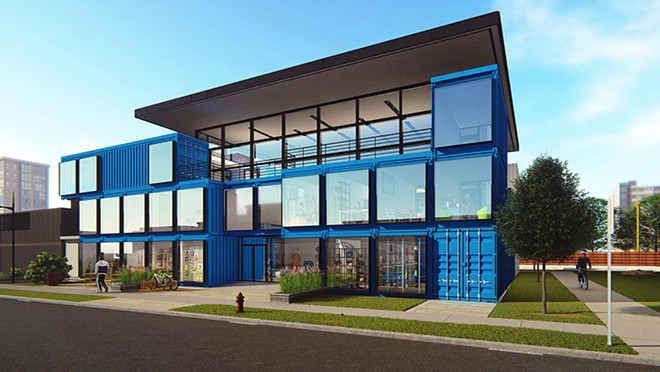 "We really just kind of dove into how we thought the current space would benefit the area," he says.

The second and third floors will have office space, with Detroit Rising Development's flagship office space on the third floor. While the new project will take over much of the Detroit Shipping Co.'s current parking lot, Hartzell says it will have about 30 parking spots, and they're working on deals to share other nearby lots.

With a number of nearby apartment buildings under renovation, Hartzell thinks the neighborhood will become much more walkable. Complex 444 is projected to be completed in fall 2021, though Hartzell says it's already been delayed due to the coronavirus pandemic.

"We want to keep the momentum going for this area," he says. "We really feel like it's extremely important to keep projects going and keep construction going, and keeping that momentum building back."