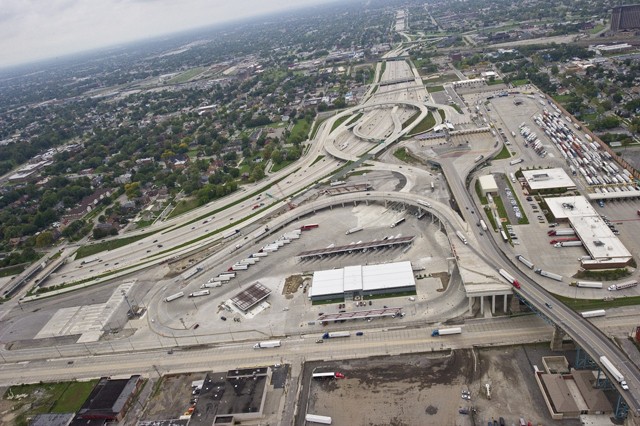 To steal a line attributed to the great legal scholar Yogi Bera, it was like déjà vu all over again in Judge Prentis Edwards' courtroom last week.

Lawyers representing the Michigan Department of Transportation were facing off once more in Wayne County Circuit Court against attorneys for the Detroit International Bridge Co. in a long-running dispute over the Gateway Project. That project, a $230 million joint venture between the state and billionaire Manuel "Matty" Moroun's bridge company, has been tied up in court action since the summer of 2009, when the state filed a breach of contract suit accusing the company of failing to abide by its part of the deal.

The lion's share of the project required the state to do a massive amount of freeway reconstruction so that there could be direct access from interstates 75 and 96 to the privately owned bridge connecting Detroit and Windsor.

It should be noted that, along with improving traffic flow, that public investment also promised to benefit the bridge company by increasing the ease with which commercial trucking could cross the border.

For its part of the project, the company was also obligated to perform specific work on land it owns adjacent to the bridge. The company has a massive truck plaza at the site, which includes lucrative fueling stations and a duty-free shop.

The problem, according to MDOT, is that the company unilaterally altered the plans, building an approach ramp to a hoped-for second span adjacent to the Ambassador Bridge. Unfortunately, that ramp stands in the way of a dedicated truck road that the company is contractually obligated to construct.

The work, which was supposed to have been competed last year, has yet to be finished. Earlier this year, Edwards — who had previously ruled in favor of the state on the breach of contract suit and ordered the company to finish the job — found the company in contempt of court for ignoring his order, briefly jailing its president, Dan Stamper, to make sure his message was heard loud and clear.

Despite all that, everyone was back last week, spending the better part of three days in court again. The state continued saying what it's been saying for more than two years now: The company isn't doing what it is contractually obligated to do.

And the company offered the same reply, saying that there never was a truly final plan for it to follow. Given that the bridge company obtained a $34 million performance bond — in essence an insurance policy guaranteeing the money to complete the project would be available if the bridge company failed to meet its obligations — would seem to indicate that there is a specific set of plans that have been agreed to.

That, anyhow, is what the state keeps arguing. Over and over.

And the bridge company, over and over, keeps trying to convince Edwards that isn't the case. After hearing what seemed to us to be the same arguments repeated again in court last week, Edwards told the lawyers representing the two sides to file yet more briefs outlining their positions. Everyone is supposed to be back in court yet again in October to hear what Edwards has decided.

Sitting in a courtroom, listening to lawyers argue over the fine points of a complicated agreement, with plenty of detailed schematics and photos to point to, it is easy to forget that there are plenty of flesh and blood people out there dealing with the everyday consequences of all these delays.

Sumner isn't exactly a big fan of Moroun and company. Earlier this year she helped lead a mini-uprising of sorts when a group of people tore down a fence the bridge company had put up, illegally cordoning off a section of Riverside Park.

From her perspective, life in this part of the city has been dominated by Moroun — who's also a major player in the trucking industry — and his bridge company for decades.

So, for Sumner and her neighbors, this is about much more than two parties bickering in court. It is about quality of life. More specifically, it is about how the quality of life in southwest Detroit is being negatively affected in a big way by the long delay in getting the Gateway Project completed.

Sumner, a community activist who lives in a stately Victorian home that's within shouting distance of I-75, says that people in the area only agreed to support Gateway because of the promise that the improvements would get bridge truck traffic off surface streets. But the seamless freeway access to the bridge and the truck plaza haven't materialized because the state says it can't open up the ramps it has constructed until the bridge company completes its share of the project.

Taking the Hits on a tour, Sumner shows us the barricaded ramps that should have been opened long ago, and rails about the traffic tie-ups featuring long lines of big rigs — both on the freeways and surface streets such as Fort and West Grand Boulevard — that regularly occur as a result.

After the tour, she sent us an e-mail pointing out a view of the things she had failed to mention while on our tour.

"The noise, the smells, the pollutant emissions, high asthma rates for our children, the inability for residents to get to and from home, to their local gas stations, local businesses, to Clark Park, etc."

"Clark Street is literally taken over and held hostage just like the rest of the surrounding streets," she adds. "But what is especially difficult is for our children and families to enjoy their park and play sports on the multipurpose field that is closest to the constant barrage of semi-trucks on the surface streets instead of being on the 'direct' connections ramps. ..."

"Try coaching with the additional diesel truck noise, having to raise your voice to the yelling level so the kids can hear. ..."

Maybe, along with all of the engineers and other technical experts, Judge Edwards needs to hear testimony from Sumner and people like her. In terms of what life will continue to be like as long as this courtroom standoff continues, the real experts in this case are the people of southwest Detroit.