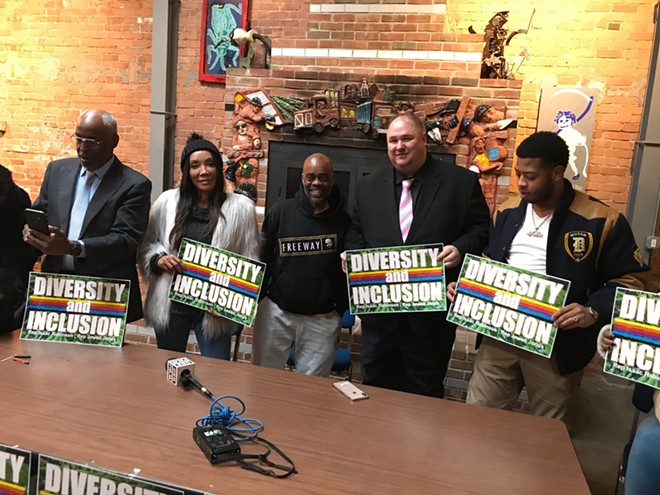 State Reps. Isaac Robinson and Jewell Jones held a Monday press conference calling for Detroit to opt-in to adult-use marijuana right away, rather than after Jan. 31, as the city previously said.

Citing reports of $221,000 in marijuana sales at three Ann Arbor locations on the first day of recreational marijuana sales (though a fourth store in Morenci opened late in the day), the representatives and their guests argued that Black and brown Detroiters are again getting a raw deal — from taking the brunt of the war on drugs to now being left out of the economic benefits of the marijuana industry.

"Millions and millions are being made off cannabis," says Robinson. "If we can feel the pain, our neighborhood should have some gain. ... We are calling on Mayor Duggan and the Detroit City Council to lift the moratorium on businesses."

Michigan's recreational pot dispensaries ring up $1.6M in sales in first 8 days
By Steve Neavling
Marijuana News
He then initiated a call and response of "Lift the moratorium, when?" The crowd responded, "Now!" Robinson does that kind of thing often: turning the subject of the moment into a chant that pulls everyone in the room into the conversation.

Robinson and Jones touted HB5120, which they introduced and helped pass through the state legislature. The bill streamlines the expungement process, making applications automatic after 60 days if the prosecutor doesn't object. (HB5120 is waiting for the Senate to take it up.) They also support expanding the pool of those eligible for expungement beyond one felony and two misdemeanors.

Actually, most of them had been at the facility the day before as part of an expungement workshop with attorneys Robin L. McCoy and Tracy M. Martin. They've been doing these workshops every few weeks. That was followed by a town hall discussion on marijuana business with a panel of Robinson, Money, Ross, and Margeaux Bruner, a lobbyist and corporate social responsibility liaison with Perpetual Harvest who was appointed to the panel by Gov. Rick Snyder to recommend a blood THC level that constituted intoxication for drivers. (The panel recommended no level be targeted at this time.) Former State Rep. Mary Waters was also there, but didn't participate on the panel because she lost her voice.

What this group was woefully lacking was anybody from city government to explain what was going on. But then, Mayor Duggan, the guy at the top, has pretty much had nothing to say about marijuana legalization or the new industry so far. Councilman James Tate says the opt-out is only temporary until a strong social equity program is developed.

Bruner said the most telling thing of the day regarding what might happen when the city releases new ordinances. "There will be lawsuits," she said.

Regardless of what Council comes up with, some who have already put a lot of money into their business will be left out, and they will sue. Bruner pointed to that as a caution for folks of modest means to hold on until the rules are all settled before committing their money. The lay of the land for retail stores is already established with the high rollers. The state won't be accepting applications for any adult use stores that aren't already provisioning centers until about this time next year. What has not been established are the micro-businesses, single event licenses, and other categories.

It's notable that Detroit has not licensed any growing facilities.

Ross pointed out that he saw a lot of vacant buildings in Detroit that look like they would make nice places for cannabis businesses. Ross, a convicted former major crack dealer, has been through the expungement process and received a license to sell marijuana in California just a few days before coming to Detroit.
One of the points made at the town hall was that it doesn't necessarily cost a ton of money to get in. However, it does take perseverance and working your way through a lot of red tape. Ross said it took him six years to get his license.

"We're trying to make sure that it's equitable here in Detroit and throughout the state of Michigan," Ross said. "It's very important as a community for us to come together and let our voices be heard. If we don't then they are going to feel like you don't care, and if you don't care the licenses are going to whoever that does care."

Why Ann Arbor deserves Michigan’s first recreational marijuana shops
By Larry Gabriel
Higher Ground
It's a new era for marijuana in Michigan. Sign up for our weekly weed newsletter, delivered every Tuesday at 4:20 p.m.