Guns or marijuana? Even in pot-friendly states like Michigan, residents can only choose one 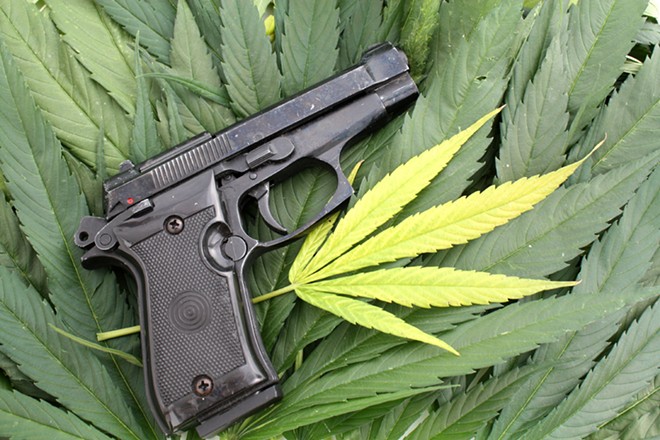 Now that recreational marijuana is legal in Michigan, many people have a difficult choice to make: Smoke pot or own a gun.

Federal law makes it a crime to do both.

Since recreational marijuana sales became legal in Michigan in December, many gun owners are still unaware that they are risking jail time by smoking pot.

On the federal level, marijuana is still illegal, and it's a felony punishable by up to 10 years in prison to smoke pot and buy or own a gun.

"It's against the law to be a user of marijuana and be in possession of a gun," Barton Morris, principal attorney of the Cannabis Legal Group in Royal Oak, tells Metro Times. "The state law, unfortunately, does not create a defense."

Morris says there's so much confusion over the issue that he recently posted a video online to explain the nuances of the law.

The Bureau of Alcohol, Tobacco, Firearms and Explosives (ATF) has not changed its position on marijuana since it sent a memo to gun dealers in 2011 to warn that they are prohibited from selling guns to marijuana users, regardless of state law. Anyone who uses marijuana "is prohibited by Federal law from possessing firearms or ammunition," the memo states.

To purchase a gun from a licensed seller, buyers must submit a sworn statement that says they don't smoke marijuana. The mandated paperwork, known as Form 4473, asks prospective buyers, "Are you an unlawful user of, or addicted to, marijuana or any other depressant, stimulant, narcotic drug, or any other controlled substance?" The question is accompanied by a disclaimer: "Warning: The use or possession of marijuana remains unlawful under Federal law regardless of whether it has been legalized or decriminalized for medicinal or recreational purposes in the state where you reside."

Lying on the form is a felony punishable by up to 10 years in prison.

In 2016, the U.S. Court of Appeals for the Ninth District upheld the federal government's ban on gun sales to marijuana users.

Already this year, the ATF has arrested at least one Detroiter for possessing a gun while being a marijuana user. On Feb. 6, a federal grand jury indicted Mytez Powell, of Detroit, on a felony count of unlawful use of a controlled substance in possession of a firearm. Powell, who faces up to a decade in prison, was arrested after posting videos and photos on Instagram and Facebook that showed him smoking a blunt, and on different occasions, holding a pistol. An ATF agent took action after Detroit police spotted a 9mm pistol in the backseat of a car in which Powell was a passenger.

In one video, Powell is brandishing a pistol "with what appears to be a blunt wrapper and marijuana on a license plate which reads "HIGH AF," court records indicate.

Gina Balaya, a spokeswoman for the U.S. Attorney's Office in Detroit, says the law applies to people who are regular users of any controlled substance, including marijuana.

‘The only way this is going to change is when the federal government legalizes or deschedulizes marijuana.’ tweet this

A federal law enforcement official who spoke on condition of anonymity tells Metro Times that cases like this are rare and are usually investigated because more serious crimes are suspected.

Steve Dulan, an attorney and chairman of the Michigan Coalition for Responsible Gun Owners Legal Foundation, tells Metro Times it's "absurd" that residents must choose between smoking pot and owning a gun. He worries about the prospect of a "hardcore anti-drug prosecutor" charging residents for excercising their second-amendment rights to own a gun while using a substance that is legal on the state level.

Whether or not prosecution is rare, the prospect of getting charged "is very real in terms of scaring and deterring people," says Dulan, who teaches gun law at Cooley Law School.

Dulan, who does not use marijuana but supports people's right to use it, says the conflicting laws may pressure people to lie on the federal form to buy a gun.

"We are living in a world where people are encouraged to lie because of the system, and that is a really bad thing," he says.

"When you have too many laws, it erodes respect for the law."

"The politicians at the federal level have to grow the guts to deschedule marijuana," Dulan says.

Morris agrees: "The only way this is going to change is when the federal government legalizes or deschedulizes marijuana."

Michigan State Police did not return calls for comment.