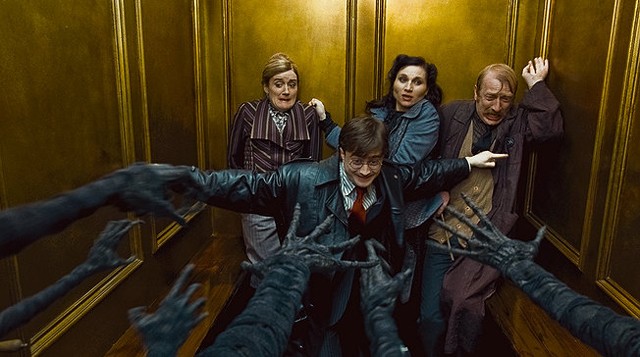 It was with the last Harry Potter film — The Half Blood Prince — that director David Yates gave up trying to create a stand-alone installment and simply accepted that audiences were either with Harry or they weren't. Dark and menacing, it was the most understated and human film in the series, ushering in a rich emotional subtext and new maturity to the characters. It was also highly episodic and practically indecipherable to anyone new to J.K. Rowling's epic.

The Deathly Hallows, Part 1 continues that trend and then some, offering up a formless film with no beginning and no end, just an unrelenting road-movie middle.

Dumbledore is dead, Voldemort (Ralph Fiennes) and his Death Eaters are ascendant, and a full-scale war is brewing. With the Ministry of Magic transformed into a sorcery-wielding version of the Third Reich and wanted posters calling for Harry's (Daniel Radcliffe) head, the teen magician and his pals, Hermione (Emma Watson) and Ron (Rupert Grint), take off for the wilds, evading Voldemort's minions and searching for the four remaining Horcruxes — pieces of Voldemort's soul that will allow Harry to defeat his nemesis once and for all.

It's bleak and desperate stuff, telegraphed by the crumbling Warner Brother's logo that kicks things off. Long gone is the warmth and whimsy of Hogworts' banquets and Quidditch games. They've been replaced by an impending magic-fueled doomsday. Easily the most mature and complex film in the series, Deathly Hallows, Pt 1 (Part 2 will be released in June) skips the trademark breathless exposition of past chapters while brazenly tossing around Potterbabble. Alternating between harrowing drama and lumbering plot turns, we follow the trio of friends into a magnificently wintery wilderness, luminously captured by cinematographer Eduardo Serra. Now on the brink of adulthood, they struggle with jealousy, loss and sexual unease as they attempt to unlock secrets from Dumbledore's past while securing the weapons they'll need to finally vanquish Voldemort.

And though some key action moments disappointingly occur off-screen (including the deaths of various minor characters), it's the first Harry Potter film that doesn't feel like it's crammed to the gills with name-checked plot points. Though the pace may be slower than necessary (especially in the film's middle section), Yates has injected some long-awaited breathing room, allowing the leads to emerge as three-dimensional characters.

While some may lament the too-brief appearances by Britain's top performers (particularly the always great Alan Rickman), Radcliffe, Watson and especially Gint prove that they've actually grown into very fine actors, capable of handling emotional nuance and contradiction. The film's middle section (to call it an act would be generous) focuses on the trio's friendship and offers up one of the most touching moments in the movie: Harry pulling Hermione into an awkward and impromptu dance.

Deathly Hallows, Pt 1 is also a triumph of mood and visual splendor. Yates' direction, elegant as ever, seamlessly and spectacularly integrates instances of magic into the drama. There's an early fumble during a chaotic above-the-clouds chase sequence, but he quickly regains his feet, delivering a wand-wielding shootout in a cafe, a gripping undercover infiltration into the Ministry of Magic, and a creepy confrontation with Voldemort's pet snake. Particularly inspired is an animated sequence that retells the childhood tale of the Deathly Hallows.
A thoughtful and handsomely mounted tapestry of bravery, dread, and emotional frailty, Harry Potter And The Deathly Hallows, Part 1 is an affecting and rewarding addition for those Potterphiles who have been pining for another chapter. For the rest of us, it offers enough spectacle and atmosphere to overcome its more ponderous moments. But, most importantly, as the final pages in an epic children's tale, it has the good sense to grow up and reveal the world for the dangerous place that it is. Let's hope the concluding chapter honors that instinct with an ending that doesn't sugarcoat the loneliness, pain and loss life inevitably brings.