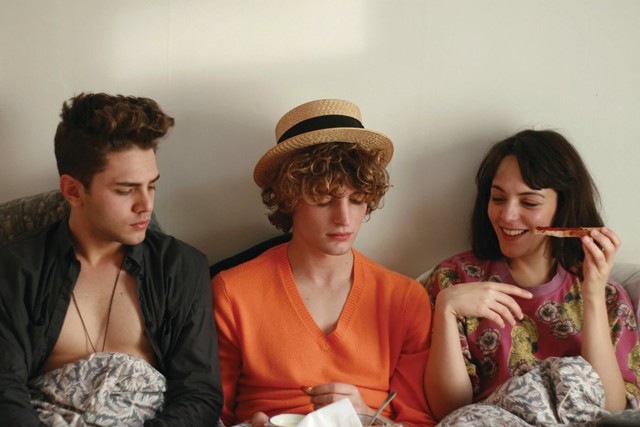 Heartbeats is a bitterly funny French Canadian love triangle about people with magnificent hair. Marie (Monia Chokri) has immaculately controlled retro raven bangs, her gay BFF Francis (Xavier Dolan has an upturned mane reminiscent of Morrissey's bed-head, and the object of their mutual affection Nicolas (Niels Schneider) has an untamed tangle of lustrous blond locks suggesting he just took a dip in the Blue Lagoon. These desperately hip young Montrealers are locked in a hopeless romantic gridlock more tangled than their coifs after a hard night of partying. Nothing makes them happy; longing puts them at odds, and the prospect of actually scoring with their heart's desire leaves them anxious, while their unattainable amour Nico is profoundly ambivalent about being wanted.

This immensely stylish exercise in cool heartbreak is the second feature from its director-star, 21-year-old Dolan, and it shows tremendous potential beneath a blanket of artsy posturing. Dolan knows his way around the nouvelle vogue, and his nods to Godard (and especially to Truffaut's classic Jules et Jim) are pointed, though a bit too on-the-nose. He also leans too heavily on the same music cues, be they Bach or an Italian cover of "Bang Bang" — which is kind of cute the first 10 times. There are also little documentary-style vignettes of unrelated people sharing their romantic disappointments that are cute, but add little to the main thrust.

When he's not busy smothering them in slow motion, Dolan gets good work out of his supporting cast. Chokri does bear a slight resemblance to Jeanne Moreau around the eyes; her performance, if not quite to that high level, is pretty terrific, holding the proceedings down with much-needed gravity. Heartbeats' more evocative French title (Les Amours Imaginaries) hints at something missing beyond what we see, and the same can be enjoyed, and even savored as the amuse-bouche from a talented craftsman who's just getting cooking.