Christmas is weekly for the hungry folks on one volunteer's route 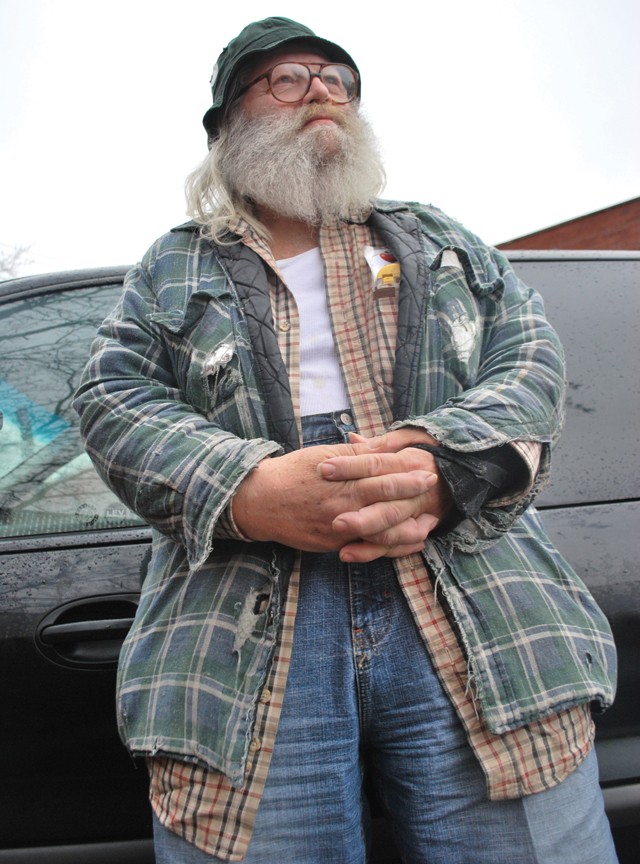 Santa doesn't look much different than the homeless people seated around him.

John Ratkov is at the Crossroads soup kitchen on West Grand Boulevard on a cold, misty afternoon, wearing a torn flannel coat with the stuffing poking out, faded baggy jeans and an old frumpy hat.

But to those gathered here for a meal, he stands out. His stout build, his bushy white beard and his long white hair have earned him the nickname Santa Claus among them. His looks aren't the only reason, though.

Every Sunday, all year long, volunteers here pack up dozens of brown-bagged lunches for him to deliver to the homebound poor. Nobody gave him this task; it's something he came up with on his own.

Today's meal includes a thin bologna and mustard sandwich, a bowl of chili, a cup of lemonade, a banana and a sugar cookie. "To some folks that's a really good meal," the 64-year-old notes. And to some folks he really is like Santa — a cigar-smoking, van-driving Santa who comes around as predictably as Christmas does.

With him today is one of his helpers, 52-year-old Renee Miller, who met Ratkov at another soup kitchen years ago. She was so moved by his self-appointed role as deliveryman to the poor that she offered to help. "It's just the right thing to do," she says. She helps load the meals into the van.

Ratkov worked for years in recycling, spent some time in prison, and when he got out he began serving others by giving rides, delivering lunches, visiting the lonely. It was partly to give him something to do, and perhaps partly to redeem his lost years. He's taken it upon himself to visit the worst parts of the inner city, places where the safety net and civic order have essentially collapsed, where someone like him is often all that stands between them and sheer desperation.

"I call myself an advocate for poor people," he says. "I just do what I can."

This charity work started years ago, when Ratkov would drive a few stranded poor people to meals at local soup kitchens. But so many of them began asking him for rides he ran out of room in his minivan. So he began bringing the meals to them. At first, Crossroads gave him eight lunches to deliver every week, then a dozen. Now it's up to about 45, and his list keeps growing.

There used to be others who also came to the shelter for boxes of lunches to deliver to the hungry, until one of them got caught selling the meals on the street and pocketing the money, and the soup kitchen canceled the practice. They made an exception for Ratkov, though.

"Santa's the only person we allow to do that anymore," says Janice Coleman, a Crossroads supervisor. "He's been doing it for years. We trust him. He's on the up and up. He's awesome. We love him to death."

Ratkov's weekly route is a tour of numbing poverty and poor health and enduring misery. Nearly everyone he delivers to suffers from something — a crippling injury, a terminal illness, extreme hardship. "You know how you hear on the radio they talk about 'below the poverty level'? They're about two steps below it," Ratkov says.

The first stop is a big old house on Mack near Chene, where a woman named Bernice lives. She needs a new lung, but her doctors are trying to convince her to simply die in hospice. She lives with her brother Bernard and her companion, Glenn, who takes care of her and who comes out into the cold rain and approaches the van meekly with an empty milk crate in his hands. Miller gets out of the van and puts three lunches in it.

Miller then heads home to take care of an ailing companion with prostate cancer and a woman now living upstairs who got into a disfiguring car accident, then was severely burned in a house fire.

Ratkov picks up his other two helpers, Rosalyn Johnson, 60, and Donna Lowman, 63, who live in a senior apartment complex on Conner near East Canfield. Before they drive away, a man named Reuben walks up, and Ratkov wordlessly rolls down his window and hands him $10. This will happen several times today. It turns out Santa's the local bank in these parts, as well.

"I loan them money from time to time, and then on the first of the month they pay me back," he says. He's known for handing out cheap cigarettes too, from a carton he keeps in the front seat.

Though Ratkov is given the lunches for free, he pays for gas and smokes and these loans with his $588 monthly Social Security check and hit-and-miss income from a rental property in the suburbs.

There are constant interruptions along the route. Ratkov's phone rings incessantly with calls from people needing food, or rides, or loans. The Styrofoam cups of lemonade start tipping over as the van makes turns, and juice starts pooling in the bottom of the cardboard box and leaking onto the floor of the van. And at one stop a man walks up and grabs a lunch and walks away. Nobody knows him; he just saw something being handed out for free, reached into the van and grabbed one.

Santa's got a bad leg and walks with difficulty even with his cane, so at most stops he just pulls up, honks his horn like crazy until the recipient comes to the door, and his helpers take the food to them. Sometimes, before his van even stops, people walk up seeking a meal. They can recognize him from a distance.

From there it's visits to one sad stop after another.

To an apartment building on East Vernor to see a woman named Anna, who's in a wheelchair and stays with Lucky and Shawn and Robert and Tina. Five lunches.

To an old house on Coplin, to give meals to Coco and her four children. Five lunches.

To a home on Dickerson, the one with boarded-up houses around it, where there's a woman whose name Ratkov doesn't even know but who's raising several grandchildren by herself. Four lunches.

To a woman living in the well-kept little house on Algonquin, the one with Christmas decorations up in quiet defiance of the blight on her street. One lunch.

To the wooden fence along an empty field, where several men come out of nowhere and walk up to the van. They're all hungry, and they've all been waiting for Ratkov. Each gets a lunch or two. "I love you. I love you. Sir!" one says, a little aggressively, enough to draw a corrective word from Johnson. But another of the men is humble and sincerely thankful. "Santa, you're a lifesaver. I ain't B.S.ing."

To the McDonald's on Conner at Warren, where a mentally disabled man they call "Mr. Q" sits alone. He leaps up and comes outside when he sees Santa driving up. "He's a good guy," Ratkov says. "He volunteers at the soup kitchen." One lunch.

To the car-strewn lot of a grimy tire repair shop on Conner, where a bay door swings open to reveal three grease-coated men peering out from the darkness within. "Bless you Santa," says a man with a forlorn look on his face. "I need them blessings," Ratkov says. Three lunches.

And then to the rest of his day, when he'll take several other people to a church in the suburbs, where they can get a warm dinner and a warm shower, both for free, both small things most people take for granted, but both really big things to those who don't usually have either. Things they wouldn't have if it weren't for this shaggy Santa in the battered van.

"He's the type of guy, he just helps everybody," Johnson says. "He never says no. You can get a cigarette, you can get anything you want from Santa Claus. He's just a blessing, man. He's a blessing to a lot of people. A lot of people wouldn't have nothing to eat today if it wasn't for him."

Detroitblogger John scours the city of Detroit for Metro Times. Send comments to him at letters@metrotimes.com.