The Pretty Ghouls just want to play rock ’n’ roll — the kind that makes you want to fuck. 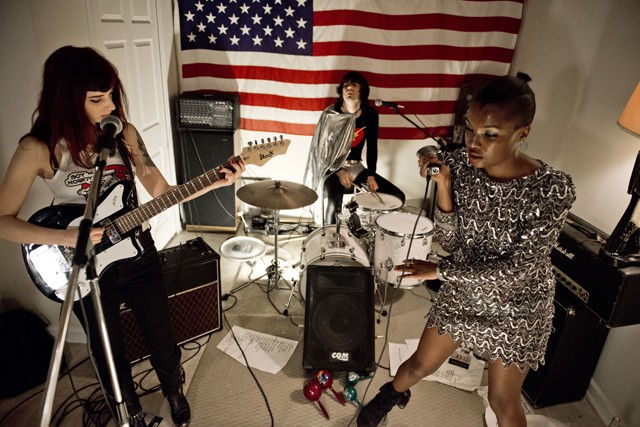 "I want to be the first black, female Iggy Pop," says Pretty Ghouls singer Asia Mock — and she's not kidding. "I just want to scream in people's faces and maybe get to rub my vagina on something in public."

That, in a nutshell, is the Pretty Ghouls: two chicks and a dude who came together with the simple purpose of making trashy rock 'n' roll while disturbing and/or corrupting as many people as possible. After all, that's the reason the music exists at all, says drummer and founding member TJ Grech.

"The purest form of rock 'n' roll just inspires people to dance and fuck," Grech says. "If you're trying to do any more than get people to dance and fuck, then you're watering down what rock 'n' roll is. I feel like dancing is the precursor for fucking anyway. If you're dancing with a chick, you have a better chance of fucking her than if you just go up to her at the bar and say, 'Let's go get deep.'"

Can't argue with that.

Grech, 30, and Mock, 26, are joined by guitarist Sarah Stawski, 23, completing the trio. The band began last November with Grech and Stawski. "We were looking for somebody else," Grech says, "and Asia was the obvious choice. Within two minutes of anyone meeting Asia they're in love with her, and she has complete control over them. She's not bullshitting them; that's just how she is. I wanted to put her on stage and watch everybody fall in love with her collectively."

The singer's full name is Asia Logan Sade Mock. "My mom told me that she named me after Sade because that was my parents' lovemaking music," she says. "Every time I hear 'Sweetest Taboo,' I want to throw up in my mouth."

The beautiful thing about the Pretty Ghouls is the overt simplicity. The three band members admit to being less-than-skilled musicians, and they have no real ambition to make a career out of this band. They just want to make people dance with their Cramps-meets-Shangri-Las trashy punky-billy ditties. "A lot of people don't dance anymore," says Stawski. "It's hard getting people to be rowdy. We want it raw and primitive. We write a lot of songs about sex. Our songs are heavy with sexual innuendo. It's about gyrating and causing people to get into a sexual frenzy."

"I feel like it's been a long time since rock 'n' roll has been viewed as dangerous," says Grech. "All the parents are worried about rap corrupting their kids. Fuck that. I still want to corrupt your children. I want to make records that teenagers will hide from their parents. I would like to think that rock 'n' roll music can still do that."

The other thing that's great about this band is the fact that, on the surface, you wouldn't necessarily put these people together. Although 30, Grech has the demeanor of an awkward teenager. As the band name suggests, he's a horror movie buff, and he's more than a little geeky about the subject. He's also an avid record collector and comic book fan. Posters of Superman, Batman, the Beatles and Iggy Pop hang on his Oak Park wall.

Stawski, meanwhile, has that classic indie princess, ice-queen thing going on. She also acts as moderator, pulling the other two in line when she thinks they're getting too crazy. Mock, obviously the front-gal, is exuberance personified. She's simply happy that anybody will let her get on a stage and watch while she does what she wants. Put them all together, and the chemistry is practically tangible.

"I'm really fucking pumped people like it," says Mock. "I've been around a lot of Detroit shows in a lot of venues. People were dancing at our second show. To have such a positive feedback from a baby idea is amazing."

The band played only its second show at this year's Panic in Hamtramck festival at the Painted Lady after Timmy Vulgar (of Human Eye and Timmy's Organism) spotted the band at its debut performance just days earlier and squeezed them in. All three were delighted with the way that show went, though they have slightly unorthodox plans for future gigs.

"We want to play prisons," says Grech. "I've made calls, but it's been weird. I eventually ended up talking to a guy at Ionia State Prison, and this guy was the special event coordinator. Apparently, maximum-security prisons have those. He asked what organization we were associated with. He also asked if we'd play Christian music, and if white or black people would like the music. I hope both. He asked if we're expecting to be paid, and when I said no, he was totally confused about why we want to do it. He was enthusiastic, but perplexed about everything to do with it. He said that it's a 'lame prison,' and that he doesn't want us to drive two hours and then play to 15 people. I would like to think that our set is not as bad as being in prison. But I want to play a maximum-security prison before we play the Lager House."

For Grech, the idea isn't so much to be different for the sake of it, but rather to avoid playing the same venues that every band in metro Detroit ends up playing month after month on rotation.

"We also want to play high schools and suburban rec centers," he says. "Everyone plays the same dive bars every month to the same group of people. There's a whole group of kids who don't know anything about the Detroit scene and the bars, plus they can't even get into them. And they have lots of their parents' money. Kids want good music, but the reason kids like shitty music is because that's what's on mainstream radio. They don't know where to go or what to listen to. As a band, I feel like you can't expect people to go to your music; you have to take your music to them."

That just seems smart. The guys are also keen to stress that, while they love Halloween and horror movies, and they're called the Pretty Ghouls, they don't want to lean too heavily on the campy horror themes for fear of becoming gimmicky. For example, they're playing a show the week after Halloween rather than during the holiday itself.

Still, they know how to get their gore on. "We just got done with a new song called 'Creature Feature' that references Humanoids from the Deep, The Brood, Basket Case and Deadly Spawn," says Grech. "I like the big movies like Halloween, but I really like movies that play up their genre, and you get that opportunity with horror and sci-fi."

This is a band that you have to see live. Brash, energetic and trash-heavy, these three are learning what they're doing before our very eyes. You get the impression that, should they eventually perfect their craft, they won't be nearly as much fun.

"We just learned how to properly string a guitar the other day," says Grech. "We don't know what the fuck we're doing. Sarah had only played acoustic guitar from her mom's folk book before I forced her to get an electric guitar. You could find a bum that beats on a bucket on the side of the road who would be disappointed in us."

When it works though, it works.

Send comments to him at letters@metrotimes.com