Left and right unite - against Obama 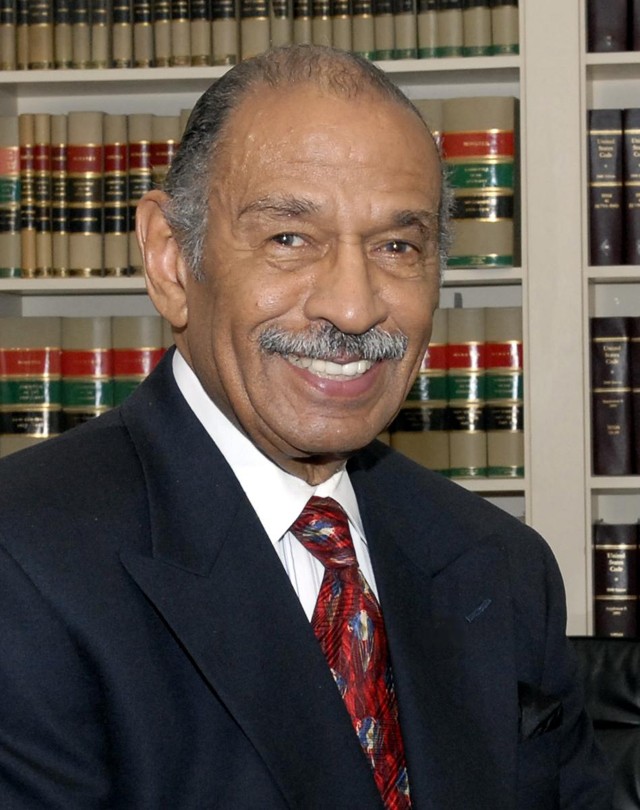 It's not often that you see Detroit Rep. John Conyers, one of the most liberal members of Congress, lock arms with someone as far to the right as libertarian Rep. Ron Paul of Texas. But last week, these two strange bedfellows (along with a handful of others) puckered up and slipped beneath the sheets without many people taking much notice.

Credit for motivating this oddest of unions goes to President Barack Obama, who, in this instance at least, seems to have achieved his oft-stated goal of getting Republicans and Democrats to cross party lines and work together. Too bad it took what many to believe to be an illegal act by our president to inspire this bit of bipartisan cooperation.

What we're talking about is the way Obama has handled the fledgling war in Libya. And in this case, we here at the Hits agree with the critics on both the right and the left.

A number of constitutional law experts contend that under the War Powers Act, passed over Richard Nixon's veto in 1973 as a way to prevent the sort of presidential abuse of military authority seen in Vietnam, Obama should have gone before Congress to seek authorization for America's continued participation in the United Nations-led bombing of Libya and its undeclared goal of bringing down dictator Muammar Qaddifi.

Obama, by law, had 60 days from the start of hostilities to go to Capitol Hill and get lawmakers there to grant their approval of this military action. We've just passed the 90-day mark, and still the United States continues to play an important role in the attacks without having obtained the permission of Congress.

That's because the president says he doesn't need the approval.

Unfortunately for him, even attorneys in the Pentagon and Justice Department dispute his view that America's role in the Libya campaign doesn't rise to the level of "hostilities" as outlined in the War Powers Act.

Which is why Dennis Kucinich (D-Ohio) went to federal court last week seeking an injunction to halt the military action after a majority of his fellow House members failed to show enough spine to stand up and shoulder the responsibility the Constitution places on them.

Joining Kucinich in what is likely to be a quixotic legal challenge were Conyers, Paul and seven other congressmen. The participation of Conyers is particularly notable. As the ranking member of the House Judiciary Committee, he knows constitutional law better than most. And as an early supporter of Obama, there is no way he can be accused of trying to score cheap political points.

What he and Kucinich are doing is showing a consistent adherence to laudable principles. The same, sadly, can't be said of our president. As a candidate for the Oval Office in 2007, Obama, a former constitutional law professor, criticized George W. Bush's failure to obtain congressional approval before leading this country into Iraq.

"We thought we learned this lesson," then-Sen. Obama said in a speech at DePaul University. "After Vietnam, Congress swore it would never again be duped into war, and even wrote a new law — the War Powers Act — to ensure it would not repeat its mistakes. But no law can force a Congress to stand up to the president. No law can make senators read the intelligence that showed the president was overstating the case for war. No law can give Congress a backbone if it refuses to stand up as the co-equal branch the Constitution made it."

Now that he is in a position to uphold the same law he decried Bush for breaking, Obama has done an abrupt about-face. In a disturbing way, the stance currently being taken by Obama is far from unprecedented. As Kucinich's hometown newspaper, the Cleveland Plain Dealer, observed:

"Like every president since Richard Nixon — whose veto of the War Powers Act was overridden by a Vietnam-weary Congress — Obama has given no indication that he feels bound by the law. Administration officials have argued that it does not even apply to Libya, since it's a NATO action with U.N. sanction. That's a weak cover."

Even some supporters of U.S. participation in the action against Libya have expressed dismay at the way Obama has handled things.

Juan Cole, a University of Michigan history professor and an outspoken critic of Bush and the Iraq war, pointed out recently on his popular blog, Informed Comment, that the intervention in Libya differs from Iraq in the sense that the former was the result of a resolution issued by the United Nations, making the action legal under international law. Even so, while maintaining that the efforts to depose Qaddafi serve a much-needed humanitarian purpose, Cole still cites the need for the president to adhere to the rule of U.S. law.

"President Barack Obama should have gone to Congress for authorization to stay in the Libya war," writes Cole. "Not doing so weakened the legitimacy of the war in the U.S. public, and involved his setting aside the legal advice he received from government lawyers. He could have set a precedent for the return of constitutional rule in the U.S., but tragically declined to take up that opportunity."