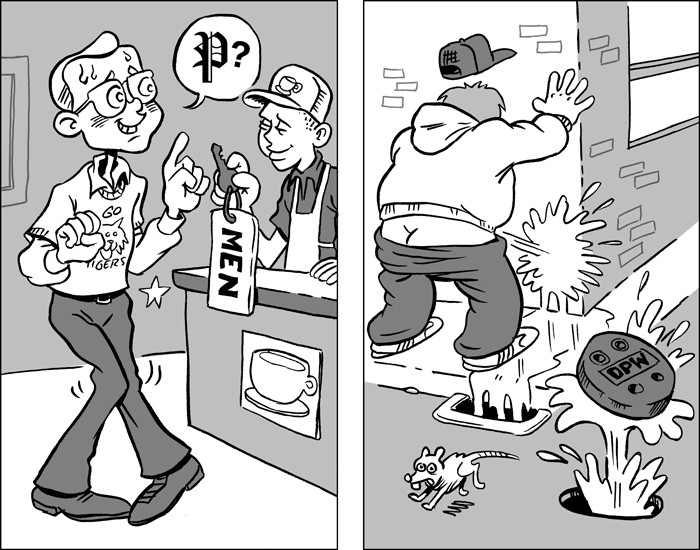 A couple years ago, it was my privilege to escort an out-of-town author to a book talk she was giving downtown. I’m guessing the organizers didn’t realize, however, that the venue, a downtown restaurant, was within earshot of the ballpark on Opening Day.

I say it because her talk turned into a disappointing fiasco. The streets were clogged with drunk, suburban twentysomethings completely unused to being in a city environment. Motorists, likely inebriated, were watching for cars, not pedestrians, and I had to pound on the hood of an H3 to get the driver not to run us down in a crosswalk as they inched into the intersection looking left. While my friend gave a talk inside a downtown restaurant, I had a smoke out on the street and watched baseball fans pissing on walls, laughing while knocking over garbage cans, throwing trash in the street. A pair of corpulent, beefy, red-faced drunks were arguing so loudly outside I had to shut the door to the eatery. Some loaded fans even walked right into the middle of the book talk and drunkenly interrupted it to ask where the bathrooms were.

It was embarrassing, disgusting and completely turned me off to Opening Day as it stands. By the time that talk was over and many of the fans were weaving home on packed freeways, downtown was filled with debris and smelled like vomit and urine.

Now, before diving too deeply into all this, I’d like to argue that much of this is due to a phenomenon known as “amateur night.” There are several holidays a year, New Year’s Eve, St. Patrick’s Day and Cinco de Mayo among them, when public drinking is winked at, and people who normally don’t drink in public decide to give it a whirl. It’s a recipe for fights, crying, petty crime and a loosening of inhibitions that means bodily functions take place very publicly. Just ask Charlie LeDuff, for instance.

But there’s something deeper here, namely that tons of white, suburban baseball fans think of Detroit as a shithole, a consequence-free playground, a place where you can get away with things you’d never try in downtown Royal Oak. Many of these miscreants who urinate all over downtown Detroit know damn well they’d be in cuffs seconds after unzipping their cargo shorts at 11 and Main. And they get plowed up there all the time and don’t dare try it. But the prevailing mentality seems to be that Detroit is such a lawless place, there’s no problem with treating it as a public toilet.

I know what some readers must think: Hey, at least we’re bringing money to the city, and the city gets destroyed by Detroiters every day in the form of scrapping, graffiti and crime. And you know what? That’s a pile of serious bullshit. Every year, Detroiters spend hundreds of millions of dollars in the suburbs and demand no such right to trash them even for a day. As for the very real problems the city faces, they do not excuse you from behaving like a civil human being on baseball’s big day.

Some readers will also object: Hey, every big event leaves some trash on the ground. That’s absolutely true, and yet, I wonder how many of those who feel that way also felt Belle Isle should require an entry fee to discourage litterbug picnickers. It’s a double-standard imbued with a peculiar sort of suburban chauvinism, that the members of the Jones family are civic burdens when they leave a picnic site littered with rubbish, but that Josh and Jaden can tip over a can of trash downtown and laugh about it because, hey, it’s Opening Day, and they’re just having fun in a place nobody really cares about.

Of course, there are likely some things the city could do to help avoid some of this nonsense, such as installing portable johns on city lots or putting out many more extra trash receptacles. And not all fans coming to Opening Day games are vomit-stained, catcalling, garbage-throwing, urinating jerks. But perhaps the ones who are courteous and law-abiding could help educate the ones who aren’t. Is it possible that the “dainty” fan can educate his fellow fan who’s a “doofus”?

We sure hope so, because Opening Day is a great chance for two worlds, so often deeply separated, to join together in common love of something that straddles our local divides. So, for the good of all concerned, please help cultivate an attitude of respect. Basically, it’s the “campsite rule” — leave it better than you found it. Don’t let narrow-minded attitudes about Detroit being a playground for lawlessness ruin it for everybody.