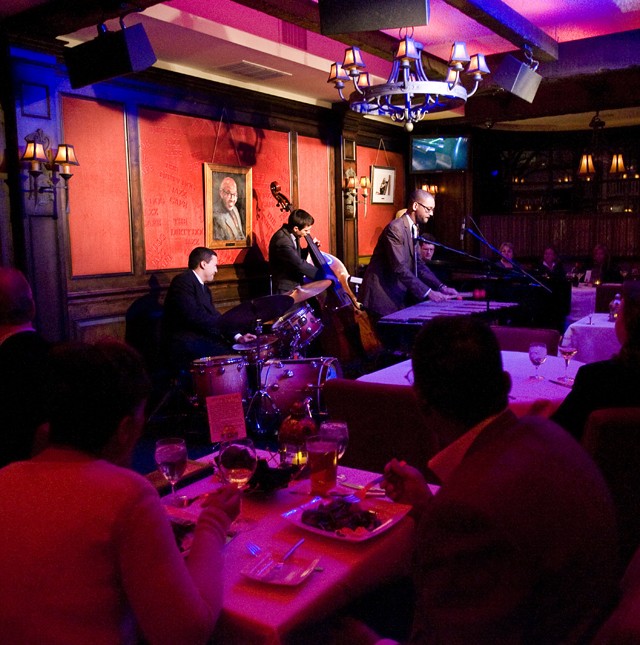 Last week, you could have caught Jason Marsalis on vibraphone at the Dirty Dog Jazz Café — if you could have gotten a reservation. The café usually sells out when it hosts national acts, the likes of Mose Allison, Freddy Cole, Stanley Jordan and the late James Moody. Founded three years ago, the restaurant, owned by International Jazz Fest patron Gretchen Carhartt Valade, quickly became an established part of the local jazz scene, even if located paradoxically in Grosse Pointe, where Valade lives.

When it opened, the CEO of Valade's Mack Avenue Records label was quoted saying they hoped people would come for the music. So why make the food so damn good?

The café started out with tapas but switched to full meals in response to customer demand. I found it a meat-eater's paradise.

Chef André Neimanis uses the sous vide method on his beef short ribs, for example, for maximum tenderness. I had the ribs both on a baby slider and over polenta hash, the latter well-soaked with juices and a perfect Proven�al sauce.

Even more delicious was an incredibly tender prime fillet with foyot sauce, almost vanilla in a richness bordering on sweetness. Foyot is béarnaise with meat glaze added; it's the tarragon that adds the vanilla notes. (I Googled "tarragon vanilla," by the way, and got lots of hits, everything from salad dressing to cupcakes.)

Another night, a dark and vast rib-eye marinated in Maker's Mark was everything beef should be, a reminder in one dish why human beings since the dawn of our species have sought meat (whatever its ecological, health and compassion downsides today).

And then the suckling pig cassoulet. Not what I was expecting — much more ham-like and fewer beans — but still a compelling argument for porcine infanticide. The black-eyed peas (which are beans) soak up the bacon and other juices, and are a key part of the dish, though used sparingly.

In fact, if I have a criticism of the café's servings, it's that they tend toward the Argentine style — lots of meat and not much else. You may get some potatoes, but if you want a veg, there's one choice, and you'll have to order it separately. Fries cooked in duck fat were fine but not, sadly, as otherworldly luscious as that sounds.

Another popular meat entrée is a Kobe burger with Stilton; after that it's old-fashioned chicken Cordon Bleu, salmon, trout and ahi — or chicken and waffles if you want to pretend you're in a non-GP jazz joint.

A starter of smoked tomato soup with Brie toast, served in a tall footed bowl, wasn't smoky but did seem to have a stick of butter dissolved in it, a surefire way to please the crowds. And Brie is even better grilled than not — melting enhances the creaminess, and that seems to highlight its tang. This is one to try at home. The same simple concept worked for Stilton flatbread. You can also get a hit of Stilton in the house salad — brilliant idea.

One way to go is the three-course option, your entrée plus $12. That will bring you a soup or a salad and the day's pot de cr�me. I found the lemon version underwhelming; simple vanilla would have been fine. But there are fancier desserts, including a chocolate Grand Marnier soufflé. I heard a waiter reminding a customer that the soufflé required a half-hour's notice to the chef.

The look of the Dirty Dog is what some have called upscale English pub — the lighting is not low, there are dark wood moldings and oak beams, and an oversized portrait of an English setter mother and puppies hangs over the bar. Though not a dog person, I found this picture strangely compelling.

A final wholesome attribute of the Dirty Dog: its integrated clientele is mindful of the little signs on their tables, which ask them to keep the talk volume down during performances. It really is about the music, but the Dirty Dog proves you can be pleasured aurally and orally at the same time.

The Café is open for lunch 11:30 a.m. to 2 p.m. Tuesday through Friday. Early dinner is 2:30 to 5 p.m., at 20 percent off. There's a solo piano player from 6 to 8 p.m. on Tuesdays and from 4:30 to 6 p.m. on Fridays. Jazz is Wednesdays through Saturdays, with dinner seatings at 6 and 8:30 p.m.; reserve ahead. A cover is charged for national acts and for local acts on Fridays and Saturdays. (Former Detroit Freda Payne performs this week.) On Tuesdays, get two prix fixe dinners for $40, and add a bottle of wine for just $10.