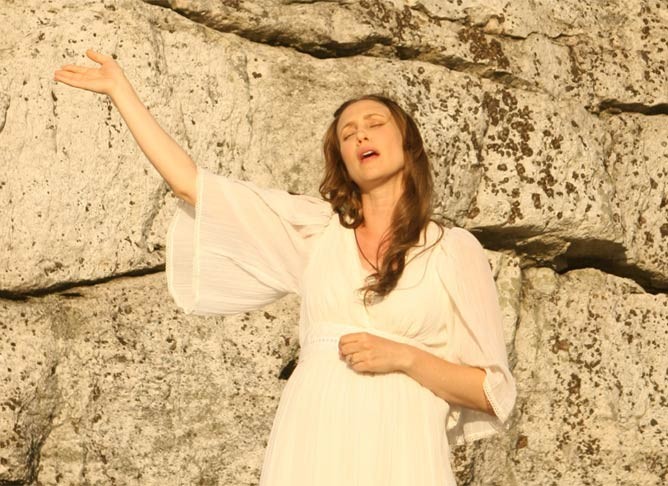 Like most spiritual quests, Vera Farmiga's Higher Ground finds insight and understanding in its small moments but struggles to offer any real epiphanies. Tackling issues of faith is no easy endeavor, and the actor-director, whatever her shortcomings as a filmmaker, deserves praise for her honest, humane, and richly observed examination of religious commitment.

Raised in a divided home, Corinne (Farmiga), even as a child, contends with an ingrained sense of a faith and an equally poignant sense of discontent. Married too young to a charming musician, she quickly finds herself pregnant and struggling to make ends meet. When a road accident convinces her husband (Joshua Leonard) to embrace God, the couple join a warm and welcoming evangelical Christian community, which is dominated by men. It's there that Corrine hopes to find a home, a place where faith, personality, and independence can live in harmony. But except for a spirited friend (Dagmara Dominczyk), who has miraculously managed to reconcile faith with her sexuality and independence into a gratifying whole, Corinne consistently finds herself at odds with the community, too often questioning and challenging their (and her own) way of life.

Unlike most American films, Higher Ground displays a sincere curiosity about religion without giving in to cynicism or dogmatism. Instead, Farmiga illustrates how some seek its embrace in order to overcome weakness, while others use it as a source of strength. As a result, her movie is a highly personal examination of what it means to define oneself through faith, rather than a generic confrontation with the religious world. And what emerges is a sensitive portrait of dissatisfaction and disappointment, as Corrine seeks certainly and community only to find that, for her, religion might not be the answer. Her attempts to lead a fulfilling life run up against the practices, assumptions, and hierarchies of Christian faith. It's a generous and sensitive approach that acknowledges the comfort others find in faith.

But as a storyteller, Farmiga flounders. Mostly charting Corrine's path toward independent fulfillment in an episodic fashion, she neither builds the narrative nor creates dramatic tension. The pacing and focus is off, sometimes dwelling on relationships and interactions that reveal too little, while giving short shrift to the conflicts that deserve more attention. In adapting her memoir This Dark World, screenwriter Carolyn Briggs (along with co-writers Tim Metcalfe and Farmiga) have resisted the urge to be simplistic or message-bound. But their story is also shapeless and undramatic, a string of incidents that don't feel like they add up to a greater whole.

Where Farmiga finds sturdier ground is with the characters and performances. An actor at heart, she is never condescending, displaying affection for all her characters — especially the women. She's also smart enough to upend expectations, playing against cliché and contrivance. From the church leader who shows unexpected moments of generosity and insight (a scene where the men attempt to learn more about female sexuality is amusingly sweet) to the Irish postman who is less of an exit strategy for Corrine than you might first think, Higher Ground pays its ultimate compliments to the complexities of human nature.

Farmiga must not only be commended for her compassionate examination of spiritual inner conflict, but also for doing what every early filmmaker should — hiring a terrific cast and bringing on an ace cinematographer (Winter's Bone's Michael McDonough). Unfortunately, she's not immune to the mistakes that often accompany first-time directors, like clumsy visual metaphors, and on-the-nose writing.

Ultimately, Higher Ground is an intelligent and carefully crafted film that bites off more than its willing to chew. By straining to avoid accusations of proselytism with an approach that's too subtle and respectful to Christian faith, Farmiga ends up delivering no message at all.