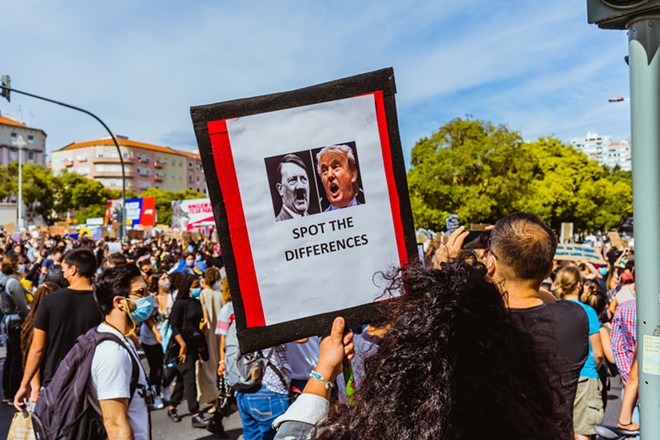 Part one of a two-part series.

As much as I loathe Donald Trump as both a man and a politician, as much as I abhor his degradation of democratic institutions, as much as it's simply felt right, I've (mostly) avoided the F-word.

Using "fascist" casually robs it of import. Think of how Republicans have for decades branded anyone to the left of Friedrich Hayek a socialist, rendering the word little more than a facile slur. Consequently, what was during the Cold War a scarlet letter has become an empty epithet.

I don't equate socialism with fascism. Socialism is a cogent ideology with intellectual underpinnings that can be read, studied, and debated. Fascism has never been coherent; it has wrought only death and destruction. But that's why the language we choose is so important. The evil of fascism shouldn't be cheapened into a synonym for revanchist politicians and reactionary policies. When we say it, it should mean something.

But in recent weeks, I've started wondering if Trump hasn't finally crossed the threshold. There's a point at which a thing becomes a thing, and we do ourselves a disservice by not calling it what it is. Truth is more important than pearl-clutching.

This is the truth: Whether he realizes it or not, Trump has borrowed a page from the fascist playbook.

I'm not referring to his well-documented authoritarianism or even his willingness to steal the election if he can't win it legitimately. Nor am I suggesting that Trump is planning a genocide.

The Nazis sent Brownshirts to left-wing gatherings to provoke street fights and instigate chaos, most famously the Red Wedding rally in 1927, in which more than 100 people were injured. They then portrayed themselves as victims of leftist anarchy. Sound familiar?

There were other factors in the Nazis' rise, of course: Joseph Goebbels's propaganda, critical miscalculations by mainstream politicians, the Great Depression, and Adolf Hitler's adroit scheming, among them. But violence was always central, and leftists were the targets. Just before the July 1932 election, brownshirts marched to a communist area near Hamburg and provoked a shootout that killed 19 and wounded nearly 300.

The Nazis secured a plurality in the Reichstag. Then, a month after he became chancellor in January 1933, Hitler exploited an act of alleged leftist violence — the Reichstag Fire, which was probably a Nazi setup — to vastly expand his powers, imprison political enemies, and eviscerate the Weimar Constitution.

This wasn't just a Nazi tactic. Before taking power in 1922, Benito Mussolini leveraged violence between his armed Blackshirts and leftists to destabilize Italy "so he could position himself as the person to stop this violence," historian Ruth Ben-Ghiat told The New Yorker.

Consider Trump's re-election message: Only he can bring order to the lawless chaos perpetuated by leftist "anarchists and agitators." The more chaos, the better for the campaign, as outgoing senior adviser Kellyanne Conway admitted: "The more chaos and anarchy and vandalism and violence reigns, the better it is for the very clear choice on who's best on public safety and law and order."

Trump has stoked the fire all year, sending paramilitary goons to quell Black Lives Matter protests, using federal police to violently clear protesters from the path of his photo-op, and declaring antifa a domestic terrorism organization. But when the unrest that followed the police shooting of Jacob Blake Jr. in Kenosha, Wisconsin, opened a path to victory, he poured out the gasoline.

The president encouraged supporters to drive into Portland and confront demonstrators, calling them "great patriots." He shrugged when they unleashed mace and indiscriminately shot paintballs into the crowd. He called it "a peaceful protest."

But it wasn't peaceful. A far-right "patriot" was fatally shot following an altercation with a protester on Aug. 29. Trump held up the incident as evidence of antifa anarchy and called shooter Michael Forest Reinoehl a "cold-blooded killer." (Reinoehl, who claimed self-defense in an interview with Vice, was killed by U.S. marshals on Thursday.) At a press conference on August 31, before Reinoehl had been charged, Trump said he "shot a young gentleman and killed him — not with paint, but with a bullet. And I think it's disgraceful."

Trump took a more charitable approach toward the radicalized 17-year-old who's been charged with gunning down two protesters in Kenosha with a military-style weapon he'd illegally taken across state lines: "I guess it looks like he fell and then they very violently attacked him. ... But I guess he was in very big trouble. He would have been — probably would have been killed."

He then told Fox News that you can't blame his supporters for heightening the tension: "I want to leave it to law enforcement. But my supporters are wonderful, hardworking, tremendous people, and they turn on their television set and they look at a Portland or they look at a Kenosha. ... They are looking at all of this, and they can't believe it."

Trump has made other disturbingly autocratic moves of late. His Department of Homeland Security withheld an intelligence brief that mentioned Russian election interference. Trump directed federal officials to cut funding to Democratic cities — or, as he termed it, "anarchist jurisdictions." He told supporters in North Carolina to vote twice as part of his ongoing effort to undermine confidence in the election.

But those offenses — even the extortion attempt for which he was impeached — pale in comparison to the obscenity of kindling violence so he can position himself as a strongman who will impose order on the left.

As they say, history doesn't repeat — but it rhymes.

All of this raises the question: Is it time to call Donald Trump a fascist?

The answer is more complicated than you think. We'll get into that in next week's column.

Get Informed Dissent delivered straight to your inbox at billman.substack.com.