Holes in the wall 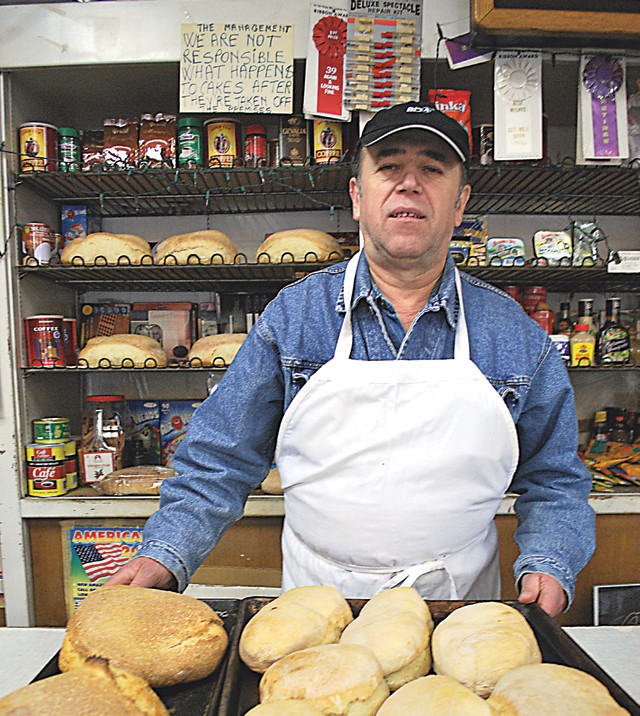 The look on his face says it all.

Vasile Sirca wears an expression of pure fatigue. He's standing behind the cookie counter at his store, Nortown Bakery, on Van Dyke by Seven Mile. He's the only one here, as usual. And he looks like he's been through a war.

"There are a lot of problems on this street. Lots of shootings," the 59-year-old says. "Long ago, it was a lot better than now. But the neighborhood change."

That's putting it mildly. Back when the store opened in 1939, it was a Polish bakery in a Polish neighborhood in the city's upper limits known informally as Nortown. Like much of the east side back then, Van Dyke was lined with mom-and-pop businesses, and the sidestreets were dense with single-family homes.

Today it looks like a battle took place here. Grassy lots are missing their houses, ashes and cinders mark the shells of others, windblown trash lines the curbs and fences.

In the past decade, most people who had the means to move away did, leaving behind those who can't — the poor and the elderly, the career criminals and drug dealers. They're the ones who've put that look on Sirca's face.

He came from Romania to Michigan in 1980 and bought the bakery from the last in a succession of owners who'd got it after the original owner retired. He'd been a lifelong baker back home, and he freshened up the store's stale offerings by adding breads from his home country and imported foods from central and Eastern Europe.

Detroit still had a fair amount of white ethnics in its neighborhoods back then, and this store became a convenient stop for neighbors wanting a taste of the old country. Here they could find Polish cookies and Yugoslavian jellies, Romanian sandwiches and Bulgarian peppers.

But there isn't a Bulgarian or a Romanian within miles of here anymore. Most of Sirca's customers are the few from the suburbs who remember this place or whose parents told them there's still that old bakery where they can get real European food. The rest who come in, the residents of this neighborhood, couldn't distinguish a Romanian bread from a cheap sliced loaf.

"The people, they don't know European breads," he laments. "'You don't have regular bread?' he quotes them asking him. 'What's regular?' he'll ask. "'Wonder Bread," is invariably the answer.

"But this is like you make at home," he notes, holding a loaf the size and shape of a football. "It's salt, water, yeast and flour. That's all. This has no preservatives inside. This is bread the way it's supposed to be."

As the city changed and the little shops around him closed, Sirca's traditional little bakery became an anomaly among the dollar stores, the party stores and the other low-end businesses that cater to the inner city. And for whatever reason, its baker is a target.

"I don't do nothing to nobody," he insists. "But these guys are animals, you know? No respect for property, for life. They do it to you, they do it to me, they come in like gangs, man. They got guns, they shoot, and when you call the police in this area, forget about it. It's like domestic terrorism."

The story of his bakery could start with the dozens of stray bullets that have pierced his windows over the years. Or all his cars he's had stolen from out front — 10 so far. Or the snickering thief who came in drunk after one theft and brazenly asked for a cake to commemorate the car he stole.

It could begin with the thugs from the bus stop who gather inside when the weather's bad, or the ones who come in for a can of pop but won't pay for it. Maybe even the menacing neighbors who leave obscene or racist messages on his answering machine, threatening his family.

He could start by telling of the time he was in the backroom after hours, making dough, and a man used something heavy to smash a window to break in. A cursing Sirca ran out and chased him — with a machine gun.

As he ran outside the baker came upon two cops sitting in their car, suddenly alarmed by this agitated Romanian holding an automatic weapon.

"The policemen say, 'What happened? Is there a war?' I said, 'Somebody just tried to break in — you don't see it?' They say, 'I don't see nobody.'" So he was the one who wound up with the police's guns aimed at him. To him it shows how backwards things are now.

"You call them and they don't do nothing," he says of the cops. "If you call them for something they come tomorrow, or if I call for shootings, like last night around 1 o'clock was shootings in here in the back, but it's almost every day. What, am I going to call every day?"

His front windows are covered with little yellow Guardian Alarm stickers. Not to announce that the place is wired. He used them to cover all the bullet holes in the glass. It's too expensive to keep replacing the glass.

He doesn't bother to cover the bullet holes in the walls and the shelves, though. "I got one here, and here, and I got one here," he says, conducting a walking tour of stray gunshots. "This one ricocheted, I don't know where they shoot. Then I got one there, then I got one in the window. ..."

Multiply his story by a few thousand times to understand why there are so many empty old stores on so many main roads in Detroit. It's hard to stay in business when you're under siege from a neighborhood that's collapsed around you. And Nortown Bakery is just another of those old-time stores that will be gone when its owner finally gets fed up or just too old to bother keeping it going anymore under these conditions.

"All the bakeries, the small bakeries, they go out of business," he says. "They moved out. In this area, I'm the only one left."

His bakery is a curious place. It's cold and dimly lit. The counter to the right features cured meats, the one at the back features bread and cookies, and the remainder of the room is devoted to a crowded collection of the most unrelated knickknacks anyone could assemble.

Here you can buy figurines of dogs and old people, princesses and cherubs. A glass cabinet houses hundreds of them. You can get little vases or big electric fans, calculators and combination locks and watches and batteries.

But the core of his business is still his food. The bread is only $1.50 a loaf. A Romanian pastrami sandwich is $5, with a free pop. The imported jars of preserves and delicacies like yellow peppers stuffed with cheese are five for $10. Homemade sausage links hang from a rope strung behind the counter, aged and dark and dry like jerky.

Binoculars sit on a shelf among the trinkets. He grabs them sometimes so he can watch what's going on outside without going up to the window and being seen. Cameras look down from several corners of the ceiling. And on most days, Sirca just watches and waits — for another stray gunshot, another thief, or if he's lucky, maybe even a suburban customer who drives in for something they can't find anywhere else in town. Not likely, though.

Those callers usually don't come by.

Sirca has thought about moving north like everyone else did, someplace where gunshots don't echo every night, where your cars don't vanish, where people don't walk in and angrily demand free things or threaten you for no reason.

But he's broke. And moving to the suburbs would bring stiffer codes, tougher inspections, demands that he replace his ancient equipment, and a search for a new building he can't sell the old one to pay for. It's just easier to stay. Besides, he lives here too, upstairs. So he keeps working hard, baking fresh bread every day, making sausage by hand, despite the harassment, the gunfire, the lonely days.

"That's life," he says. "That's the way it is. I take it like it's something normal. I already get used to it. What are you gonna do?"