Hoodwinked Too!: Hood vs. Evil

Shrek-wannabe works hard to get everything wrong 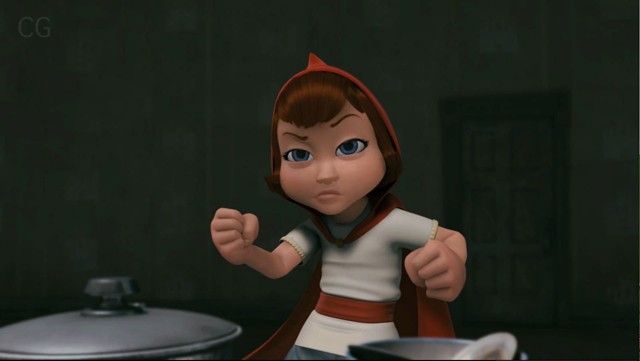 Hoodwinked Too!: Hood vs. Evil

A joyless and shabby waste of pixels that cynically slathers on ineffectual 3-D effects in order to squeeze a few extra bucks out of an audience desperate to give kiddies something to do on a rainy Saturday. Here's some advice: Force the tots do extra math problems or help you clean out the garage. They'll have more fun.

It's not just that Hood vs. Evil's chintzy plasticine animation is 10 years behind the current technology. Or that the voice talent (only Glenn Close and Patrick Warburton return from the film's lackluster predecessor) is cashing a quick paycheck from Dimension. Or even that the script's pop culture shtick is so relentlessly humorless. (Really? Silence of the Lambs and Scarface references in a kid's flick?) It's that this Shrek-wannabe works so damn hard to get everything wrong.

Hayden Panettiere is Red, who has gone off to train at the Sister Hood, a kind of Tibetan Home Ec version of the League of Shadows. Sequestered in the mountaintop fortress, she is unaware that HEA (Happily Ever After Agency) agent Granny (Close) has been kidnapped by Verushka the Witch (Joan Cusack) during a botched attempt to rescue Hansel and Gretel (Bill Hader and Amy Poehler). Forced to partner with the Big Bad Wolf (Warburton), Red stumbles through a series of depressingly stale scenarios before discovering her foe's world-conquering plan (it involves a truffle that grants invincibility).

How Hood vs. Evil avoided straight-to-video oblivion is beyond me. Aside from a frantically staged chase in its beginning, the movie is a textbook case of sucky CGI, atrocious plotting, unfunny scripting and bland acting. Somewhere during the first 30 minutes I actually felt my soul shrivel up and die. Trust me, you've had more entertaining colonoscopies.