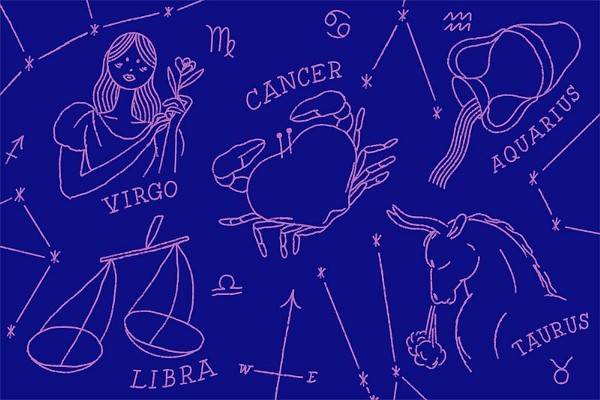 ARIES | March 21 – April 20: You're at a huge turning point. It looks to me like some things have run their course, and what's next is floating around in the ethers. You have yet to let go of whatever you've been doing up till now. There are decisions to make. Part of you is afraid to release the past and move on. Between your $$ issues and the fact that more than a few people rely on you, following your bliss doesn't seem to be doable. At the same time, your higher self knows that it's time to break free. Consider the virtues of riding two horses at once for as long as it takes to get the new show up and running.

TAURUS | April 21 – May 20: You can't believe how freaky things are starting to look in your neck of the woods. There are days when you wonder if you can count on anything anymore. Searching for some semblance of truth has led you all over the map and taken you far enough into yourself to reckon with things that you never thought you'd have to see. Whatever you've culled from your experience has blessed you with a wealth of compassion that most of us can only emulate. The heart that is bigger than China is about to go beyond the pale. For better or worse, do your best to keep it open.

GEMINI | May 21 – June 20: You're one of those people who can handle pretty much anything, but the last few years have put you through the ringer. The hard part of too much change and too many external pressures comes from the way those things either harden the heart or eclipse it, out of necessity. There's no way to diminish the impact of what's going on in your world at the moment. Advice is useless in an arena where the spirit is learning all of its deepest and most intense lessons. The good news is, as long as you can keep holding space for the truth, this experience has all the makings of a rebirth.

CANCER | June 21 – July 20: After removing the mask that made it so easy to be whoever you thought you were, the façade is down and you're bringing more of yourself to your life. For many of you, opening up to a broader expression of self has shown you that you're much stronger and much deeper than you've ever given yourself credit for. A big weight has lifted, and you're learning how to live according to more natural cycles and rhythms. This change has brought you closer to your loved ones, and it's made the whole act of living more fluid and fulfilling than it's been in a long time.

LEO | July 21 – August 20: It's easy to get complacent. You've got no reason to want to change any of this. At the same time, you know you're half asleep. For a long time it's been clear to you that even though life couldn't be better, something is calling your spirit elsewhere. If you know where that is, any opportunity to go there will show you how much it costs us to settle in or settle down. The spirit of adventure and the idea that there's nothing left for you to learn from your current situation will bring you to the point where, when it's time to take the big leap, you won't think twice about going for it.

VIRGO | August 21 – Sept. 20: Things are in a state of suspension. It's one of those times when "you can't do this until you've finished that." There's also a sense that what happens next is out of your hands. Maybe so, but at times like this, one has to wonder if what we never expected is about to open the way to things that are way more interesting and exciting than what we thought would lead us to our heart's desire. There are still precautions to take, and big needs to respect your health. If you remain open, shut off the Nazi in your head, and wait on the will of heaven, life will open up like a flower.

LIBRA | Sept. 21 – Oct. 20: Things go up and down. Like everyone else, you have to figure out how to handle your life and deal with your private issues at the same time. Part of you is stuck on the idea that you're at the mercy of your past, when in fact you're a bright light who's bigger than all of it. Making plans to bring everything together is where it's at right now. You are not alone. There's more than one ally who is 100% there for you. As you consider your options, take it slow and easy, lose the notion that you're shoveling shit against the tide and embrace the idea that God wants you to succeed

SCORPIO | Oct. 21 – Nov. 20: Making allowances for people comes with knowing where they've been. You can't call them to task for things they aren't entirely conscious of. At the same time, living with the stuff their lack of awareness stirs up is a huge nuisance. As far as that goes, codependence takes its toll and you've just about had it. My advice? Keep the level of understanding high enough to know when it's time to "just say no," notice how they deal with it when you stop nursing their weaknesses, and as soon as you can, do everyone a big favor and let them grow up and deal with themselves.

SAGITTARIUS | Nov. 21 – Dec. 20: All your hard work is paying off. This is a watershed moment that will spill over and impact your life on multiple levels. In many cases, it's not just about outer stuff; your mind and heart are ready to wrap themselves around a host of new possibilities. Everything about this paints this time in your life as the foundation upon which your future stands. Those closest to you could turn out to be quite surprised by what the changes in you will require of them. Stay tuned; give them a chance to get into alignment with this because they too will have to step into a bigger pair of shoes.

CAPRICORN | Dec. 21 – Jan. 20: The push to make it big competes with the fear that you can't. With everything to suggest that the latter is all in your mind, you are the only one who can change it. You're in no mood to hear my helpful hints and thoughtful platitudes, but I can tell you that newness and change will arrive the minute you release your doubts. The part of you that wants to make a difference is ready to shift into a different and totally sincere gear. Everything hinges on authenticity. Fakery, greed, and the issues that ignite the ego when we forget that none of this is about us need to be left behind.

AQUARIUS | Jan. 21 – Feb. 20: You're on the right track, and you have the right idea. At this point, any limitations that you face relate to the fact that you don't know enough about who and what you're dealing with. You are also subject to your own blind spots. In order to move along your chosen path, it would be good if you could search outside the box for information and figure out how to get your fixed ideas out of the way. This path that you're on is about to take you where no one has gone before. Don't let the limitations of your personality — and the tendency to think too much — block your ability to see the light.

PISCES | Feb. 21 – March 20: Figuring out how to handle things on your own will get easier. Up till now, more than enough support has been the name of the game. If it hasn't already, what you've gotten used to is about to disappear and give you a chance to see that there's a huge amount of satisfaction in handling things independently. The more you embrace this, the easier life will go. As the next few weeks unfold, you'll get the gist of this. Resist the temptation to stay tied to anyone's apron strings. Something brand-new will come out of this. Pull yourself together and get into it.