Each day, 385,000 babies are thrust from the warm, ambient, and nurturing homes of their mothers' wombs into a cruel cacophony of sound, bright light, and all things unknown. Birth, our first experience, though impossible to remember, is something we leave behind. Despite our pleas to return to the womb where there are no jobs, taxes, or chores, we will never again experience the safety of being held, carried, and mostly hidden.

That is, until now.

No, we aren't talking about a feat of science or technology, we're talking about art as an act of compassion and for multi-diciplanary artist Jessica DeMuro Graves, an act of healing, resiliance, and a big fucking fuckity "fuck you" to the war on women's bodies, as evidenced by oppressive abortion bans like the one that recently took effect in Texas.

DeMuro Graves is one of 15 contributing artists collaborating on Womxnhouse Detroit, an immersive, interactive full-house multi-installation, multi-scensory project focused on giving female-identifying artists a platform to explore feminist ideals through their respective mediums. It also serves as a metaphor for the importance of women taking up space in their homes, their communities, and as they move through the world.

The home selected to house the project isn't just any old home, it's the childhood home of Asia Hamilton, a curator of the exhibit and the owner of Norwest Gallery. Womxnhouse Detroit will be the first event in the home which Hamilton is working to transform into an artist residency for women. The project itself has some pretty powerful roots, too, as it's an extension and reimagination of the landmark feminist art installation and performance space Womenhouse in Chicago, founded by Judy Chicago and Miriam Schapiro in the early 1970s Chicago as a way for women to subvert gender roles and re-cast the male gaze.

"I have long been a person who has kept women's reproductive rights, women's autonomy, women's identities and the safety of those things in the forethought of a lot of the projects that I have done," DeMuro Graves says, adding that she's done complete bodies of work on the experience of sexual assault.

For her Womxnhouse Detroit installation, DeMuro Graves, along with co-curator and primary facilitator Laura Earle, have transformed an upstairs bedroom at the house into a womb. Earle created the wood structure that DeMuro Graves is constructing as a large-scale reinterpretation of a womb composed largely of fiber arts, as well as immersive soundscapes to mimic the muted, ambient, and swelling tones we experienced in utero. The space will have a beanbag-like seating element that allows visitors to return to the womb, which as DeMuro Graves suggests, is a return to self. 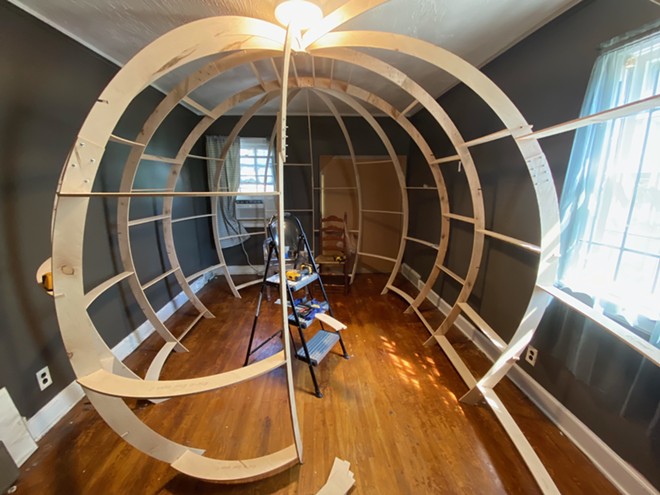 The idea behind "The Womb" was not sparked by politics or commentary on women's bodies, but from a deeply personal place. When DeMuro Graves was invited to be a part of Womxnhouse, she had just found out she was pregnant.

"We found out like a month after our wedding," she says of the pregnancy. "We were over the moon. And halfway through the planning process, at eight weeks, I had this devastating miscarriage. And to me, I was like, well, the womb doesn't change. This doesn't change the project at all. In fact, I think it only lends itself to this project in some weird way," she continues.

"Miscarriage is another thing that women experience and men experience, too. So I started to realize that the womb is the epicenter, right? It's this source of creation, but also of destruction. Also many of us that are women identifying go through that birth-death-rebirth cycle monthly. So while it may be jarring, it may feel like a journey back to your original home in a way. In some way, shape, or form, as far as science works right now we are all brought to this world through the womb."

However, DeMuro Graves was following the passage of the Texas abortion ban since May, and when it took effect earlier this month, she had to do something. Not wanting to obstruct the complex sanctity of "The Womb," she and Earle came up with a last-minute installation to add to Womxnhouse Detroit: the wire-hanger monster.

Not it's official name, but it promises to be scarier than any of the imaginary beasts hiding under our childhood beds. DeMuro Graves describes the piece as a "monster blob waterfall effect of coat hangers cascading out of a dark closet." The piece is a two-parter, however, and guests will experience part one before they ever enter the home.

The home itself will feature works by Melinda "MeMe" Anderson, Loralei R Byatt, Amelia Duran, Setareh Ghoreishi, Erin Gold, Olivia Guterson, Donna Jackson, Melanie Manos, Sabrina Nelson, Dalia Reyes, Leslie Sobel, and Rosa Maria Zamarron, and will include experiences like an apothecary, a prayer room, and a COVID-19 memorial, which explores loss and how often women are left holding the brunt of that for families.

DeMuro Graves realizes that Womxnhouse Detroit will likely attract the people who already experience the very things the installation project looks to recreate and explore and can serve as a truly healing journey through womanhood. But she reflects on a previous body of work centered on sexual assault. When presenting the work nearly a decade ago, she was shocked when the first person who walked up to her to express how the work made them feel, it wasn't a woman — it was a man. And he told her that it was cathartic for him.

"I wasn't expecting that to be the first person to come right up to me," she says. "But it's always my hope that the art will reach the unexpected."

Womxnhouse Detroit will open to the public Sept. 18 through Oct. 23, 2021 at 15354 St. Marys Street in Detroit; bit.ly/3tuyy0N. Admission is a suggested minimum donation of $1, but tickets are required.