How does a country function when half its people have lost their minds? 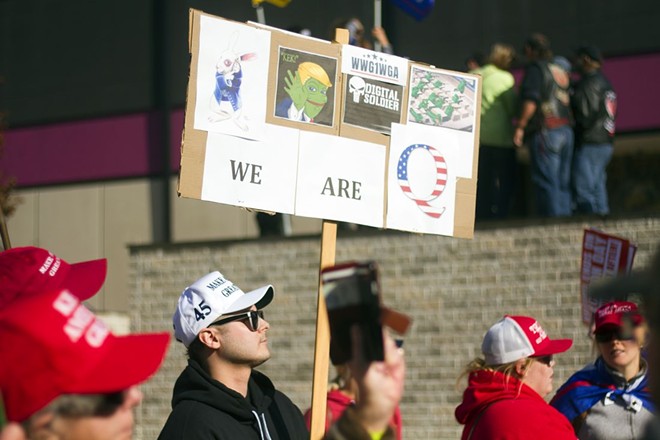 “As far as the civil war goes,” Jonathan Strickland, the mayor of the 1,400-person town of Sundown, Texas, told Reuters recently, “I don’t think it’s off the table.”

Strickland, an oilfield production engineer, joined a militia-type outfit called the South Plains Patriots. As another member explained, “If President Trump comes out and says: ‘Guys, I have irrefutable proof of fraud, the courts won’t listen, and I’m now calling on Americans to take up arms,’ we would go.”

They, like two-thirds of Republicans, say they’re certain that Donald Trump won re-election but had his victory stolen through a vast conspiracy of ballot-stuffing election officials and vote-switching vote-counting machines hacked by foreign powers. (It’s not clear how many of them actually mean it.)

Trump is still fanning the flames.

He spent Sunday morning on Maria Bartiromo’s Fox News show, gaslighting viewers about how he had “tremendous proof” of fraud and claiming that his loss was “statistically impossible.” He spent Sunday night — after 60 Minutes aired an interview with the election security chief Trump fired for saying the election was “the most secure in American history” — venting on Twitter: “We have some big things happening in our various litigations on the Election Hoax. Everybody knows it was Rigged.”

Actually, nothing is happening in their “various litigations.”


On Friday, a federal appeals court rejected Trump’s request to block Pennsylvania from certifying its results. On Saturday, the Pennsylvania Supreme Court tossed a Republican congressman’s lawsuit alleging that a law passed by the Republican legislature to make mail-in voting easier violated the state constitution, so all mail-in ballots should now be thrown out and Trump should be declared the winner. (That was a real argument, I swear to God.)

Similarly, the much-hyped “Kraken” lawsuits filed by not-quite-official Trump lawyer Sidney Powell against Georgia and Michigan became instant internet gold not just because of Powell’s hilarious unfamiliarity with spellcheck, but also for their fusillade of factual errors, unproven assertions, absurd arguments, citations of random tweets, and even ethical breaches.

By now, it should be obvious to anyone with firing neurons and access to Google that this smorgasbord of paranoia and ignorance is based on nothing more than the delusional rantings of an addled 74-year-old. While I could spend thousands of words rebutting these claims — no, Detroit didn’t have more votes than registered voters; no, there’s nothing unusual about urban counties reporting late; no, Dominion Voting Systems was never affiliated with Hugo Chavez — ultimately, there’s little point. Conspiracy theories are self-reinforcing. They’re impervious to fact-checks.

As Lin Wood tweeted (and Trump retweeted) before he and Powell filed the Georgia lawsuit: “Enemies of America will deny its allegations. Do NOT believe them. Believe Sidney & me. We love America & freedom. Our enemies do not.”


Our democracy withstood Trump’s attacks, barely. But that’s hardly cause for celebration. tweet this
It pains me to be an enemy of America, but there’s an issue we need to reckon with: Tens of millions of Trump voters have become unmoored from reality, many with fundamentalist certitude. And this belief in a low-rent conspiracy theory — which some Republicans argued justified staging legislative coups — will soon become an article of faith.

Our democracy withstood Trump’s attacks, barely. But that’s hardly cause for celebration. This year was less an aberration than the culmination of the cynical, total-war politics Republicans have employed since the Gingrich era, one that brooks no compromise and prospers by tearing down political systems. Fortified by a feedback loop of propaganda — first talk radio and Fox News, then the clickbait sites Facebook delivered to Boomers’ feeds, now the Pravda-esque OANN and Newsmax — the GOP became a breeding ground for conspiracy theories.

To be sure, belief in conspiracy theories isn’t a conservative pathology. It’s a human trait, primed by millions of years of evolution, arguably driven by the same forces that create religions: a need to see patterns in noise and causal agents to explain phenomena. People across the political spectrum who lack trust in institutions tend to embrace conspiracies out of “motivated reasoning” — an effort to validate a pre-existing worldview inconsistent with the available facts.

But here’s the difference: The more knowledgeable liberals become, the less likely they are to buy conspiracies. For conservatives, the opposite is true.

As reliant as Trump was on the “poorly educated” white working class, and as eager as the left has been to paint his followers as illiterate dolts, his most fervent and politically engaged supporters — those who embraced his anti-liberal, anti-expert, anti-elitist messaging — had college degrees.

These are exactly the people research says comprise the high-knowledge, low-trust sweet spot in which conspiracy theories take root, flourish, and thrive. Nothing or no one short of Trump himself can convince them that Biden won. And the party’s elites — the ones who know better — have been cowed into silence, terrified of landing on the wrong side of an angry tweet, hoping this insanity will disappear when Trump does.

It won’t. And Trump’s not going anywhere. Come Jan. 20, he’ll no longer be president, but he’ll remain head of the Republican Party in everything but title.
The problem isn’t just that the inmates took over the asylum; it’s that radicalization has inertia. It devours the impure. Already, Trump turned on Georgia’s far-right governor and Republican secretary of state for not helping him steal the election. He threatened to have Ohio’s governor primaried for acknowledging Biden’s win. He spurned Fox News for the more obsequious OANN, and his supporters followed.

So long as Trump and his acolytes and wannabes control the GOP, the party will be wedded to the fiction that he lost because of a conspiracy no one quite understands and Joe Biden is an illegitimate president. No deviation from the orthodoxy will be tolerated. Republican states will erect barriers to mail-in voting to “restore trust.” Republican senators will hold hearings on election fraud so Lindsey Graham can grill Dominion executives about their seances with Hugo Chavez’s ghost. Maybe Q will moderate a 2024 GOP presidential forum.

America now has two political parties, but they’re not Democrat and Republican in the traditional sense. One is a broad, loose-knit, often ineffective coalition stitched together by its fear of the other guys; the other is, well, the other guys, who have lost their fucking minds.

We shouldn’t pretend this isn’t the case or kid ourselves that it’s going to get better before it gets worse.