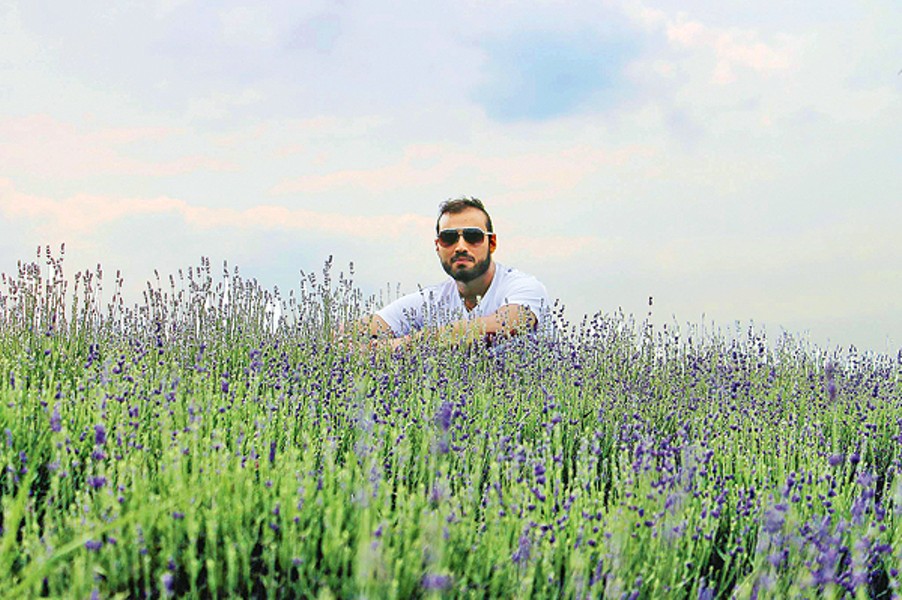 Our metropolitan region has been brimming over with news of new craft food and drink producers. From artisanal marshmallows to craft pickles to small-batch spirits, we're seeing an explosion of talent, with dozens of new, shelf-stable products ending up on area shelves.

Much of that energy has welled up in Detroit, where cheap real estate and subsidized kitchen rentals abound. But a new business is slated to open that shows the city doesn't have a lock on this gustatory creativity. It's called Eli Tea, and it's the brainchild of 26-year-old Eli Majid,

We originally heard about Majid because, like many of the small producers we cover, he used a kitchen provided by the nonprofit Detroit Kitchen Connect to make his products. That's how he created Eli Tea's Traverse Cherry Festival Tea, which is Majid's own original creation. He makes the tea by roasting Montmorency cherries in sunflower oil and cinnamon, then mixing them with hibiscus and rose. It's his top-selling product.

"It's all-natural," he tells us. "The cherries are sourced from Traverse City area. It's nice iced, but it's equally pleasant hot as well. I like it hot with a little bit of honey."

To say Majid came to the new food movement via an unusual route would be an understatement. He says, "I have a background in plant biology. I got into tea because I wanted to continue my research, but also engage with the public about plants and nature. I'm able to do that through tea. Most of my tea peers are kind of hippie-dippie. I'm more scientific about it. I'm interested in the health benefits, but I want to know the scientific studies behind it."

In fact, it's more accurate to say that Majid was interested in ethnobotany, which is the study of how people use plants.

"Most of my research was here in the Midwest," he says. "I would go out and do field interviews and behind each of the plants that we would go research, there was always a story behind it, the use behind it. So it was one part science, one part culture. My research was in native Midwestern edible plants. So I was focused on anything and everything edible. And I was trying to part figure out what the medicinal uses were, too, to learn what we can grow more of. Because native plants are hardier, and better for the environment. There are lots of traditional recipes out there, and many of the recipes just happen to be used as teas: infusing it in hot water to bring out the benefits."

Speaking scientifically, Majid knows just how to coax the beneficial properties out of the ingredients, and the methods aren't always the same.

"There's a little bit of difference of preparation," Majid says. "Things like ginseng or any root or bark, you really need to boil it for more than 10 minutes to bring out the health properties. Things like medicinal ginseng brew are brewed for 20 minutes. It's similar for licorice and cherry bark brew, which are good for the throat."

These are the sort of expertly prepared "tea tonics" Majid will offer to his customers at the new shop, an all-natural specialty loose-leaf tea retailer with a hundred varieties of tea, in addition to a wall of Michigan-made products, including jams, cookies, and more.

Even though Majid has researched the health-giving properties of his teas, it's really the flavor that knocks people out, especially that robust Traverse City Cherry Festival Tea. "The reason it's so popular is because it's something people can relate to," he says. "They know where Traverse City is. It's a light, fruity tea. It literally tastes like red Kool-Aid, but natural, which is amazing. When I was playing around with the cherries, I'm thinking, 'Wait. It tastes like Kool-Aid. How does that happen? I thought Kool-Aid was not real.'"

Making tea, it turns out, is well-suited to a person with a background in science. He has to air-dry the ingredients to about 5 percent water. He says, "It has to be dry, because the rose petals and hibiscus in there are dry as well. They'll absorb any water from the cherries. And that's not a good thing. You want any leaves super dry. Not to zero, but close. Tea doesn't go bad unless it's two, three years old and 100 percent dry. If it has cracks in it or if it's just brittle and turns to dust when you touch it, then it's too old. A tiny bit of water helps it survive."

Majid has drawn upon the world for inspiration and scoured the country for ingredients. He explains: "I have an Indian masala chai. It's my family's recipe; we're of Indian heritage, but I was born in Saginaw. I also have mint from Oregon, lavender from Colorado, and will be featuring green tea from Hawaii in the store."

How is it possible that a scientist and a plant biologist would find himself opening up a tea shop pretty much fresh out of college? Majid has a good explanation.

He says, "It was pretty much that my research grant was done and it was like, 'What do I do now?' There are no jobs for a botanist outside of an academic institution or at a plant nursery. And they never actually get to interact with the public. And that's kind of disappointing, because they're such a great resource of knowledge."

Thankfully, Majid will bring that know-how and energy to a growing food scene for which interacting with the public is a vital part of business.